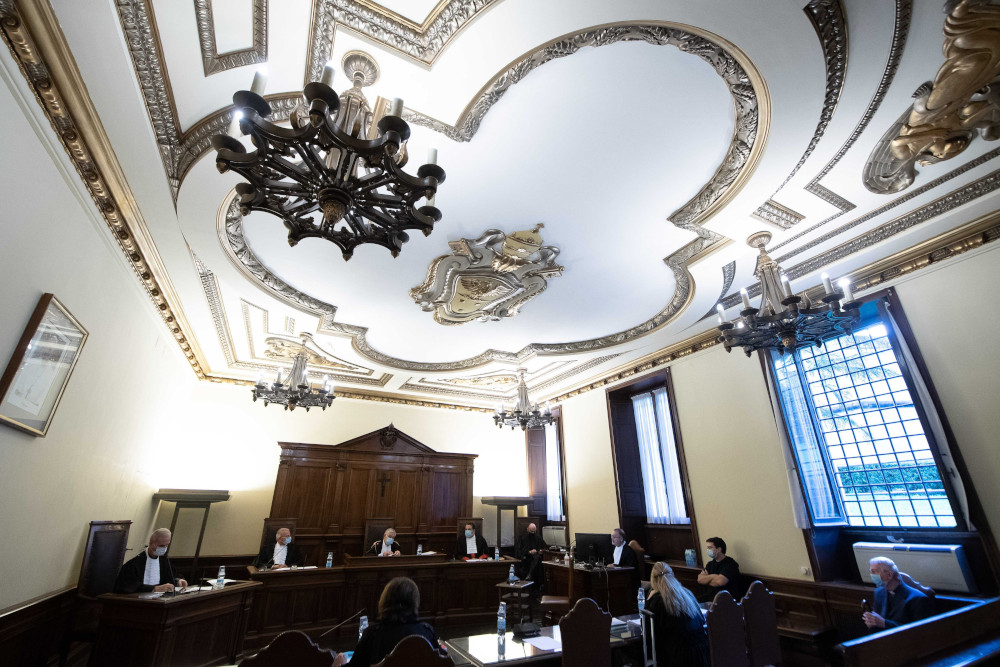 A former student of the minor seminary located at the Vatican said he was sexually abused over a six-year period despite having told the rector that an older student was "bothering" him.

The former student, identified as L.G., took the stand March 17 at a trial in the Vatican City State criminal court. He testified against Fr. Gabriele Martinelli, also a former student at the St. Pius X Pre-Seminary, who is accused of sexually abusing L.G. between 2007 and 2012.

Although both were under the age of 18 when the abuse apparently began, the court accused the priest of continuing to abuse the younger student when Martinelli, not yet a priest, was already 20.

L.G. also said he was shunned by Msgr. Enrico Radice, the former rector of the seminary, when he tried to inform him of the abuse.

Radice's reaction, he said, "left me shocked, it was very harsh."

According to L.G., the former rector accused him of being jealous and threatened to call his parents and pastor, as well as kick him out of the minor seminary.

Radice also is standing trial and is accused of hindering the investigation into the abuse allegations, including by lying to Vatican investigators in 2018 when he affirmed with absolute certainty that he had no knowledge of sexual acts ever taking place at the seminary while he was rector.

The seminary, located inside the Vatican, is operated by the Diocese of Como and run by Opera Don Folci, the religious institute. Both the diocese and the institute are accused of failing to protect the young students.

In his nearly three-hour testimony, L.G. said being accepted into the seminary was a source of pride for himself and "for my community. There was a photo of me with the pope in the parish calendar."

However, the abuse began after just two months at St. Pius X, he added, saying Martinelli would enter his room and touch him inappropriately.

"Once he was done, he left like it was nothing. It was a shock; I felt paralyzed," L.G. told the Vatican court.

Over time, he said, Martinelli's visits would happen more frequently. When asked why he did not fight or yell, L.G. said he would try to make noise either by slamming a nearby nightstand or punching a wall.

Although Martinelli would leave after being frightened by the noise, "he would come back," L.G. said. The other boys in the room "either slept or pretended to sleep. No one ever got up to say, 'What are you doing?'"

As the years went on, L.G. said Martinelli would grow bolder in his requests and would want sexual acts in random areas, including a room in St. Peter's Basilica where students would change into their cassocks before Mass.

However, L.G. said he would manage to escape and that no abuse ever took place in that room.

He also told the Vatican court that in 2013, after leaving the minor seminary, he told retired Bishop Diego Coletti of Como about the abuse he endured and asked the bishop for money to pay for psychological therapy.

Coletti, he claimed, told L.G. he needed to provide written documentation first and encouraged him "to leave the church" and live his life peacefully.

L.G. said that although he never personally witnessed Martinelli engaging in sexual acts with other victims, "it was common knowledge that Martinelli had a tendency to crawl into bed at night in other people's rooms."

L.G. claimed that Fr. Ambrogio Marinoni and Fr. Marco Granoli, the former vice rector and spiritual director, respectively, were alerted to Martinelli's actions and began staking out the corridors in the evening.

"Fr. Ambrogio told me that one night he had seen Martinelli come out of a boy's room. He reported this to the rector, but it was branded sleepwalking," he said.

L.G. told the Vatican court that he now suffers from sleep disorders and has had problems establishing trusting relationships with others.

He also said he no longer wants to pursue the priesthood because of his "total revulsion and disgust" with the church environment.

"I feel nauseous just thinking about entering a seminary," he said.

The trial is set to resume March 26, and several witnesses are expected to take the stand, including Kamil Jarzembowski, the first former student to speak publicly of the apparent abuse at the seminary, and Bishop Vittorio Lanzani, then-deputy to Cardinal Angelo Comastri, former archpriest of St. Peter's Basilica.