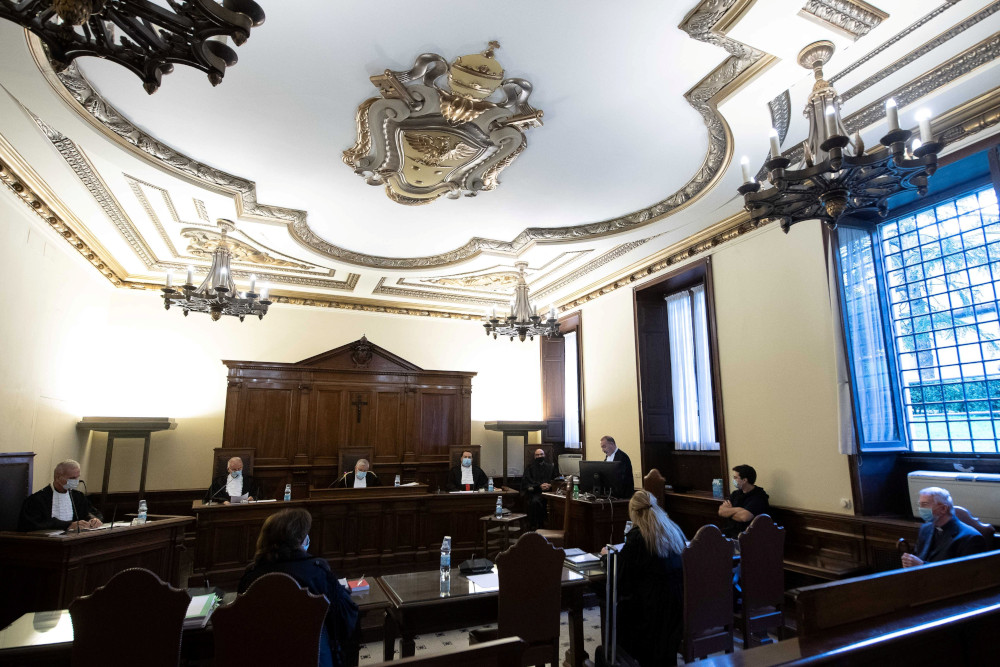 The Vatican City State criminal court is seen Oct. 14, 2020, during the opening of the trial of two Italian priests accused of sexual abuse at a minor seminary inside the Vatican. Father Gabriele Martinelli, 28, was accused of repeatedly sexually abusing a younger student at the seminary and Msgr. Enrico Radice, 71, former rector of the seminary, was accused of obstructing the investigation into the younger priest. (CNS/Reuters/Vatican Media)

A priest accused of abusing a younger student at a minor seminary located at the Vatican cited jealousy as the main reason behind the allegations against him.

Taking the stand Feb. 10, the fourth day of the Vatican criminal trial against him, Fr. Gabriele Martinelli also said the "unfounded" accusations also were meant to hurt the reputation of the St. Pius X Pre-Seminary, where the alleged abuse occurred.

"I got on many people's nerves because of my character," he testified, "because I try to do the best I can in everything."

Martinelli, 28, is accused of abusing a younger student from 2007 to 2012. Although he and his alleged victim were under the age of 18 when the abuse allegedly began, the court accused him of continuing to abuse the younger student when Martinelli was already 20.

Msgr. Enrico Radice, the former rector of the St. Pius X Pre-Seminary, is also standing trial and is accused by the Vatican of hindering the investigation into the abuse allegations, including by lying to Vatican investigators in 2018 when he affirmed with absolute certainty that he had no knowledge of sexual acts ever taking place at the seminary while he was rector.

The Vatican also accused the seminary as well as the Opera Don Folci, the religious institution that runs the minor seminary, of failing to protect the young students.

Neither Fr. Angelo Magistrelli, the current rector of the seminary and superior general of the Opera Don Folci, nor Radice were present at the trial. The alleged victim, identified as L.G., was also not present.

During a cross-examination that lasted about two hours, Father Martinelli said the accusations were an attempt by his accusers to prevent his ordination to the priesthood.

He also claimed the allegations were fueled by an internal rift in the seminary between students supporting one staff member or another based on a preference for the traditional Latin Mass versus the current form.

The accused priest, who prior to his ordination had shared a room with L.G. and another student, also argued that certain controls were in place that would have prevented any abuse from taking place without someone noticing.

"Everyone would have noticed if something happened," Martinelli said.

During his testimony, several text messages exchanged between L.G. and Martinelli were read, including one in which the alleged victim accused the priest of having "a sexual perversion."

L.G. also accused the priest of hurting him and pitting the seminary superiors against him.

Martinelli told the courtroom that L.G. never confronted him in person or in writing about the accusations L.G. eventually made in anonymous letters addressed to Pope Francis, Cardinal Angelo Comastri, vicar general of Vatican City State, and Radice.

He also cited a series of messages from 2012, after the alleged abuse occurred, in which L.G. asked Martinelli for help in finding an apartment to rent after enrolling at La Sapienza University in Rome.

The trial is set to resume Feb. 24 and several witnesses are expected to take the stand.