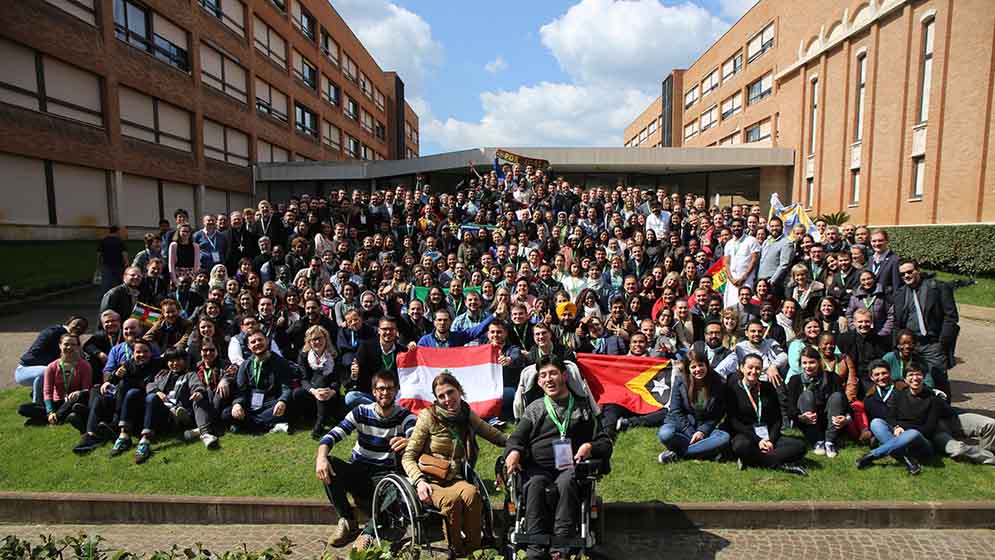 A Vatican-hosted conference of some 300 young people meant to advise Catholic bishops on the needs of youth today has acknowledged that some in their generation want the church to change its teachings on so-called "polemical issues" such as same-sex marriage and use of contraception.

In a final document issued after a weeklong meeting in Rome, the young people also called on the Catholic Church to better include them at all levels of its global community and noted women are "not given an equal place" in church leadership.

"The Church must involve young people in its decision-making processes and offer them more leadership roles," the youth say in their document, issued March 24 after six days of encounter intended to help prelates who will gather in Rome in October for a Synod of Bishops focused on the needs of the rising generation.

"These positions need to be on a parish, diocesan, national and international level, even on a commission to the Vatican," state the youth. "We strongly feel that we are ready to be leaders."

The final document for the pre-synod meeting, divided into 15 sub-sections over 16 pages, takes a generous tone: calling at points for a more welcoming, open and merciful church.

It is also noted by its direct approach: while written with a deep infusion of Catholic theology and spirituality, the youth do not cite excessively from church documents and instead speak freely about issues they see affecting them.

"Today's young people are looking for an authentic Church," the youth say at one point. "We want to say, especially to the hierarchy of the Church, that they should be a transparent, welcoming, honest, inviting, communicative, accessible, joyful and interactive community."

"A credible Church is one which is not afraid to allow itself to be seen as vulnerable," they suggest. "The Church should be sincere in admitting its past and present wrongs."

The young people address church teachings on same-sex marriage and contraception in a section of the document on how youth today are searching for meaning in life.

"There is often great disagreement among young people, both within the Church and in the wider world, about some of her teachings which are especially controversial today," the text states. "Examples of these include: contraception, abortion, homosexuality, cohabitation, marriage, and how the priesthood is perceived in different realities in the Church."

"What is important to note is that irrespective of their level of understanding of Church teaching, there is still disagreement and ongoing discussion among young people on these polemical issues," it continues. "As a result, they may want the Church to change her teaching or at least have access to a better explanation and to more formation on these questions."

The document addresses the situation for women in the church in the same section, and returns to the issue at several other points.

"Today, there is a general problem in society in that women are still not given an equal place," it states. "This is also true in the Church."

"There are great examples of women serving in consecrated religious communities and in lay leadership roles," it continues. "However, for some young women, these examples are not always visible."

"One key question arises from these reflections; what are the places where women can flourish within the Church and society?" say the young people. "The Church can approach these problems with real discussion and open-mindedness to different ideas and experiences."

The pre-synod document was drafted after discussions among 20 small language groups at the March 19-24 meeting. The process also included input from 15,000 people engaged in the process through Facebook and other social networks.

The attendees at the meeting, open to people between the ages of 16-29, were selected by global bishops' conferences, Catholic institutions and the Vatican's synod office.

Francis opened the event March 19 with an address telling the group to "be brave" and speak freely in their discussions, telling them the Catholic Church must take risks in order to grow.

Filipe Domingues, a Brazilian delegate at the meeting who was part of the drafting committee for the final document, told NCR that attendees saw the event "as a single opportunity to speak, meaning that it might not be repeated soon."

"The pope told us to speak and young people did," said Domingues, who has lived in Rome for several years pursuing graduate studies.

Katie Prejean McGrady, one of three delegates selected by the U.S. bishops to attend the gathering, called the final document a "game changer."

"If this document doesn’t result in a seismic shift in how we minister to & with young people, then it's not being read properly," she said on Twitter shortly before the document's release.

After its presentation March 24, the pre-synod meeting final document is to be formally presented to Francis as part of the Vatican's Mass for Palm Sunday March 25. The text is then going to be used to help form the October synod's initial working document, known as an instrumentum laboris.

The young people say in the introduction to their document that they did not intend for it to be used "as an empirical analysis of any other time in the past, but rather as an expression of where we are now, where we are headed and as an indicator of what [the church] needs to do moving forward."

"This is to give the Bishops a compass," they state.

Included in the other issues the document discusses are young peoples' relationship with technology, their understanding of the future of society, and their need for mentors to walk with them as they face life's challenges.

"A common dream across continents and oceans is the desire to find a place where the young person can feel that he or she belongs," they state. "Young people seek to engage with and address the social justice issues of our time. We seek the opportunity to work towards building a better world."

This story appears in the Synod on the Youth 2018 feature series. View the full series.
A version of this story appeared in the April 6-19, 2018 print issue under the headline: Young people advise bishops at pre-synod meeting.