At 77, Pope Francis keeps a busy pace, and aides keep their fingers crossed 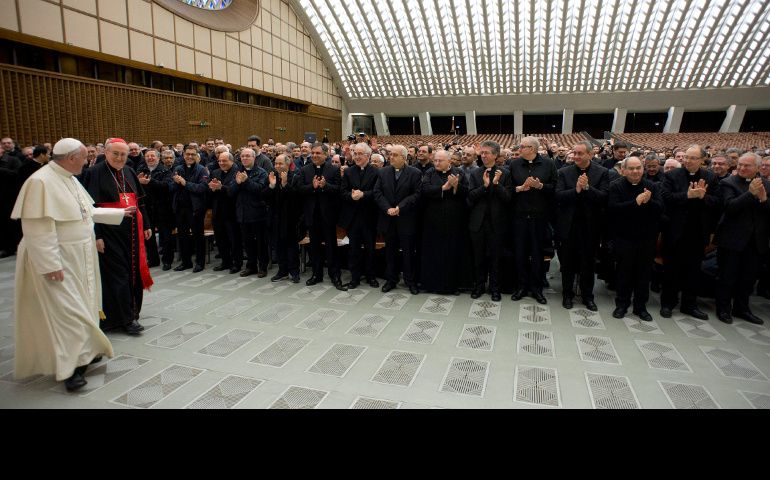 Pope Francis acknowledges applause from priests as he arrives for a meeting in the Paul VI audience hall at the Vatican March 6. (CNS/L'Osser vatore Romano)

When cardinals gathered in the Sistine Chapel a year ago to choose a successor to Pope Benedict XVI, a frail 85-year-old who had become the first pope in six centuries to resign, many of them had one non-negotiable for the next pontiff: that he not be over 70 years old.

So what did the cardinals do? They elected 76-year-old Cardinal Jorge Bergoglio of Argentina — a man who had part of a lung removed in his 20s and who today “walks kind of crookedly,” as a former aide once put it, because he wears orthopedic shoes to help alleviate chronic lower back pain.

All in all, though, Pope Francis, now 77, seems to be doing quite well at the one-year mark of his papacy, despite maintaining a nonstop pace of liturgies, meetings, public appearances and hours of prayer throughout a day that starts before 5 a.m.

“He eats, works, it’s true,” said the Rev. Antonio Spadaro, a Jesuit priest — like Francis — who conducted a book-length interview with the pope last year and knows him well.

“The thing that consoles me — because I get a bit worried when I see him so busy — is that he has a very clear sense of his own capabilities, so he is able to balance his energies,” Spadaro said during a recent interview in the Rome offices of Civilta Cattolica, the Vatican-approved magazine he edits.

“At times, when he feels he can’t do something … he has no scruples about saying so,” he said. “For example, when he feels really tired, sometimes he will go to bed very early. He knows when to unplug.”

Indeed, just last week Francis canceled an evening event because he was suffering a slight fever. His doctors told him to rest, and he did, though he was back at work the next morning.

That doesn’t mean the pope’s schedule doesn’t worry church leaders and Vatican officials. They welcome the reforms and fresh air that Francis is bringing to an often dysfunctional institution. They just want him to have the stamina to keep it up.

“He’s not a young man, and he’s got to husband his strength and his health,” Boston Cardinal Sean O’Malley, the American representative on Francis’ circle of eight top advisers, told The Boston Globe.

O’Malley, a member of a religious order inspired by St. Francis, recalled joining the pope last October for a one-day trip to Assisi, the Italian city where the saint — and the pontiff’s namesake — was born.

“They dragged him to every cave, every altar and every crypt,” O’Malley said. “Everywhere he would go, someone would stand up and say, ‘This is the first time a pope has ever come here.’ I kept thinking, ‘He shouldn’t be here this time!’ ”

Others worry about Francis’ security, noting that he stays in the Vatican guesthouse, which is easily visible from outside the Vatican walls, rather than in the fortresslike apostolic palace where popes traditionally live.

But Francis dismisses such concerns with a shrug and a smile, aides say, arguing that his fate is in the hands of God — and even joking that their worries about his future will make them work harder.

One thing in Francis’ favor is that he is not traveling nearly as much as John Paul II or even Benedict.

Vatican officials say Francis would like to make more trips outside Rome, and he seems to thrive on contact with the wider public. But for now, he has too much on his plate trying to reform the Curia and introduce other changes that were one of the main reasons the cardinals rallied behind his election.

To that end, Francis rises every morning at 4:45 a.m. to spend a couple of hours in prayer. Then he celebrates Mass in the chapel of the Casa Santa Marta where he lives with dozens of other Vatican residents and guests who are visiting, always delivering an off-the-cuff homily that usually gets wide attention in the media.

After breakfast in the communal dining hall, his morning is usually packed with meetings and audiences, though he does make sure to take a cherished post-lunch siesta. And that’s just the official schedule: Vatican officials say they can be called in at any time during the day to brainstorm with the pope or be asked to address some emerging issue.

Francis is also busy making personal phone calls, giving interviews, preparing major documents and speeches and writing thank-you notes. Last summer, he personally phoned the editor of an Italian newspaper to schedule an interview. “I can’t do Wednesday, nor Monday, would Tuesday suit you?,” he asked Eugenio Scalfari, thumbing through his diary.

It’s the sort of pace he has kept up since his youth, and one that he maintained throughout his career as a priest and then bishop and cardinal, and now as pope.

The papacy, though, can seem crushing in its expectations and duties; in fact, during the 2005 conclave Bergoglio reportedly signaled those who started pushing his candidacy to back off. That helped lead to the selection of Cardinal Joseph Ratzinger as Benedict XVI.

“He never wanted the job,” a Vatican official, a European, said of Francis, asking for anonymity to speak frankly. “He escaped one time, it came around again, and he’s decided it’s Providence.”

“I get the sense,” he added, “that Francis is a man who is enjoying himself now.”

Desperate bishops should not accept just anyone as priests, Pope Francis warns

Guadalupe celebrations to be held outdoors, online amid canceled pilgrimages