Agenda for youth Synod approved after 'interesting exchange' among bishops 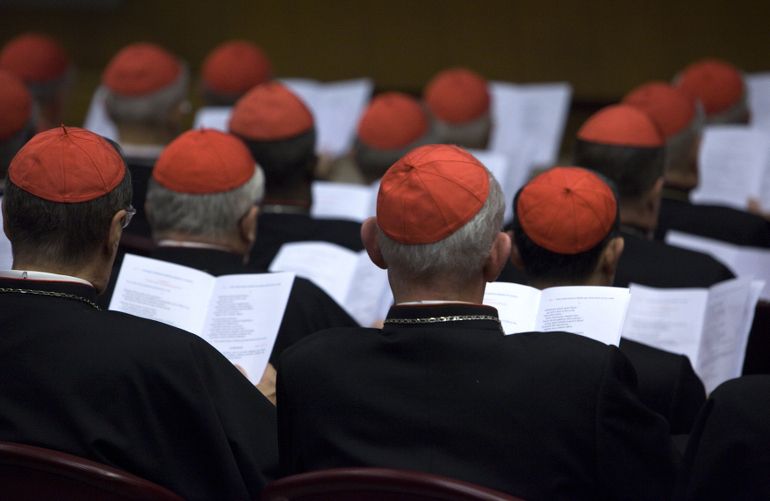 In this Oct. 20, 2014, file photo, cardinals gather in the Synod Hall at the Vatican. (CNS photo/Maria Grazia Picciarella, Pool)

Rome — The Vatican office for the Synod of Bishops announced that the agenda for an October meeting of global Catholic prelates on young people has been approved, following "an interesting exchange of opinions" about the document among the members of the organization's governing board.

In a brief press release May 9, the Synod office said the 15 bishop-members of its ordinary council had met together May 7-8 with Pope Francis to finalize the Instrumentum Laboris, or working document, for the upcoming Oct. 3-28 gathering of Catholic prelates.

"The text raised up an interesting exchange of opinions, in the way of suggestions and observations that were inserted into the document, in order to give the Synod Fathers a more appropriate instrument for discussion," said the release. "The amended text was approved by all the participants."

A Synod of Bishops is a weeks-long meeting of Catholic prelates, held in Rome and focused on a specific topic. The theme of the 2018 gathering, chosen by Francis, is "Young People, the Faith and Vocational Discernment."

The meeting is being organized by the Synod's Vatican office, led by Cardinal Lorenzo Baldisseri, with the help of the group's ordinary council, most of whom were elected to their roles at the end of the last Synod in 2015.

Among the elected members of the council are Cardinals Christoph Schonborn of Austria, Wilfrid Napier of South Africa, and Oscar Rodriguez Maradiaga of Honduras. The only American in the group is Philadelphia Archbishop Charles Chaput.

The Vatican began preparing for the 2018 Synod in January 2017 with release of a questionnaire focused on discerning the needs of young people today. The survey was sent to national bishops' conferences and also posted online to allow youth to share their input.

The Synod office has also hosted two gatherings of young people in Rome to solicit their opinions: a smaller conference in September 2017 and a larger event attracting some 300 global youth in March.

The second gathering released a lengthy final document that acknowledged that some young people want the church to change its teachings on so-called "polemical issues" such as same-sex marriage and use of contraception.

The May 9 release said Baldisseri had mentioned the March event to the ordinary council meeting, and "pointed out the lively participation of the young people, coming from many parts of the world in representation of diverse ecclesial and extra-ecclesial settings."

The text of the 2018 Synod's Instrumentum Laboris has not yet been made public. Also still unknown are the names of the bishops who will take part in the October gathering.

Francis calls for investment in healthcare, 'the primary common good'