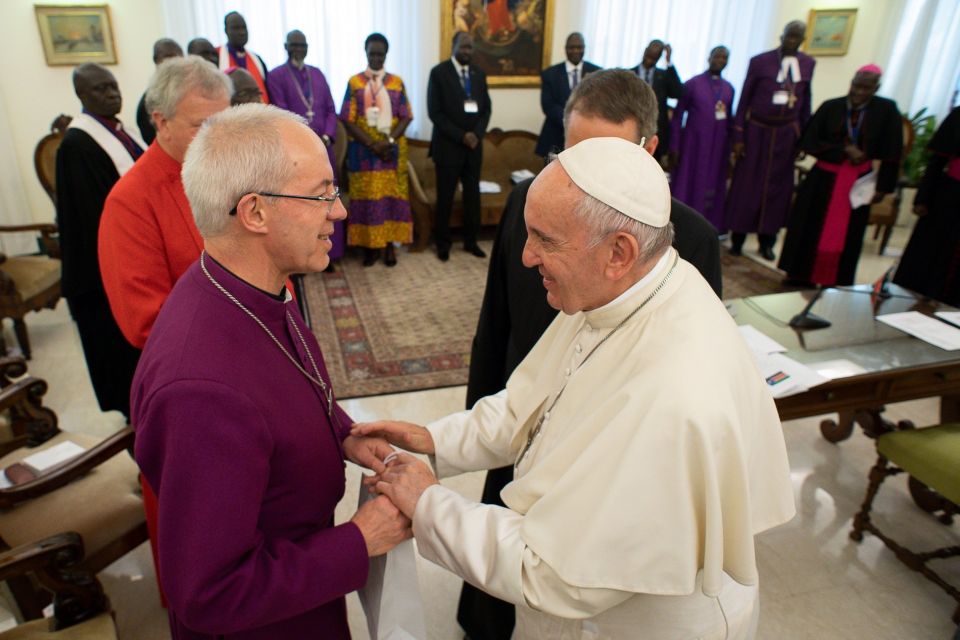 Pope Francis greets Anglican Archbishop Justin Welby of Canterbury at the conclusion of a two-day retreat for the political leaders of South Sudan, at the Vatican in this April 11, 2019, file photo. Pope Francis, Archbishop Welby, and the Rev. Jim Wallace, moderator of the Church of Scotland, marked the 10th anniversary of South Sudan's independence July 9, 2021, and again promised to visit the country when it is at peace. (CNS photo/Vatican Media via Reuters)

ROME — Pope Francis and Archbishop of Canterbury Justin Welby may undertake their much anticipated, but delayed joint trip to South Sudan in "the next few months" to encourage peace in a country still recovering from a bloody civil war and a humanitarian crisis.

"God willing, sometime in the next few months, perhaps year, we will go and see them in Juba, not in Rome, and see what progress can be made," said the head of the global Anglican Communion on Feb. 6, referring to South Sudan's leaders.

"That is history," said Welby of the likely trip that will mark the first time the two ecumenical leaders have traveled together in such a capacity.

Francis and Welby had sought to visit the war-torn country in 2017, although the country's violent conflict and deteriorating conditions had foiled those plans.

During his Feb. 6 remarks at an arts festival in Belfast, Ireland, Welby recalled a 2019 retreat at the Vatican where Francis met together with both the South Sudanese president and the country's rebel leadership.

Following an address, which Welby recalled as "utterly beautiful," Francis — in a surprise gesture — knelt down and kissed the feet of the 5-member leadership delegation from South Sudan, begging both the president and the rebel leadership not to return to civil war.

"I could see tears running down their faces," Welbly recalled. "Tears were running down every face there, including the BBC cameraman.”

"I won't say the war ended, but it was the turning point," he added.

In December, the Vatican's foreign minister, Archbishop Paul Gallagher, traveled to the South Sudanese capital of Juba, where he met with both the country's political and religious leaders.

While noting that "there is no perfect time for any such visit,” Gallagher said there was "strong support" from local authorities for a papal trip in 2022.

Confessions of an exhausted Catholic

Pope: Make your heart accessible to people with disabilities