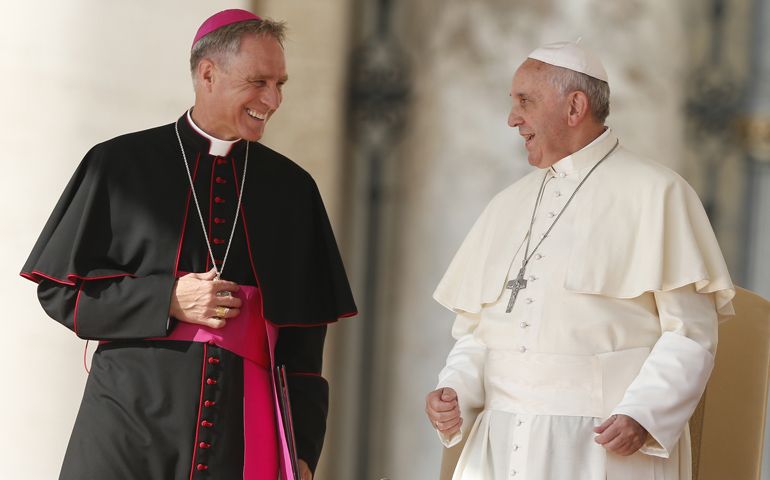 Pope Francis talks with Archbishop Georg Ganswein, prefect of the papal household, as he begins his general audience Oct. 16 in St. Peter's Square at the Vatican. (CNS/Paul Haring)

Vatican City — Pope Francis has said and done things that have surprised the world -- and surprised those who work closest to him -- but calling what he is doing a "revolution" is a "frivolous slogan," said Archbishop Georg Ganswein, prefect of the papal household and personal secretary to retired Pope Benedict XVI.

"Certainly, some of Pope Francis' gestures and initiatives have surprised and will continue to surprise, but it's normal for a change of pontificate to bring changes on various levels," the archbishop said in an interview published Tuesday in the Rome newspaper Il Messaggero.

As for personnel changes, the 57-year-old German archbishop said: "This isn't a revolution, it's simply an act of governance and responsibility."

Ganswein said he was surprised by the appointment of eight cardinals to a commission to advise the pope and help plan a reform of the Roman Curia, but cardinals are supposed to be the pope's closest advisers.

"I admit, I'm curious to see what will come out of it," he said.

Asked what Pope Francis means when he speaks of wanting a church that is poor, Ganswein said: "I'm trying to understand more and more what that means. One thing is clear to me: the expression 'poor church' is a central theme" in the papacy of Pope Francis.

"It is not a sociological expression, but a theological one," the archbishop said. "At the center is Christ who is poor and everything follows from that. Without a doubt it touches on the lifestyle of every Christian and requires special attention to the suffering, the sick and those who are poor in the literal sense."

The Italian newspaper reporter also asked Ganswein, who lives with retired Pope Benedict and has been his personal secretary since 2003, what it is like to continue in that role while also serving the reigning pope as head of the papal household, organizing the pope's daily meetings and audiences.

"It's a challenge," he replied. "Every once in a while I'd like to ask advice from my predecessor, but I don't have one because no one has ever held this double position."

"Nevertheless, with a bit of common sense, I do my best. I put into practice Pope Francis' words: Never close yourself off and don't be afraid," he said. In the end, whether he is helping Pope Francis or retired Pope Benedict, "my service is for the Lord and the church," he said.

The 86-year-old retired pope "is well," Ganswein said. "He prays, reads, listens to music, dedicates himself to his correspondence, which is a lot, and receives visitors. Every day we walk together in the woods behind the monastery (where they live), reciting the rosary."