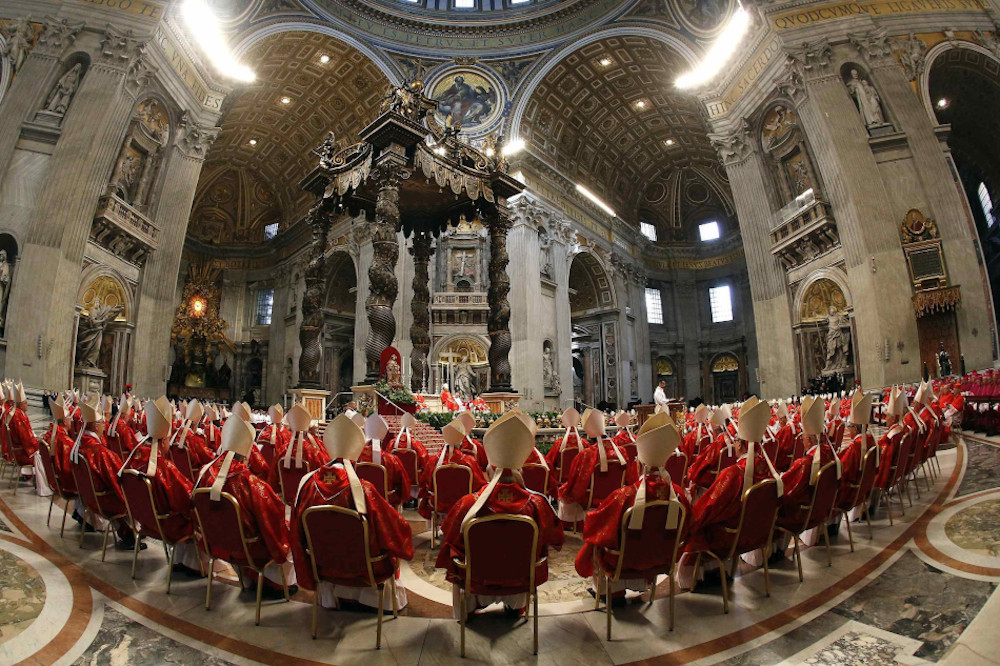 Cardinals from around the world attend a Mass for the election of the Roman pontiff in St. Peter's Basilica at the Vatican March 12, 2013. (CNS/Reuters/Stefano Rellandini)

Before he dies or retires, Pope Francis needs to make changes in the process of electing a new pope to avoid the possibility of a deadlocked conclave. Popes John Paul II and Benedict made innovations in the election process to deal with such an eventuality, but they only made matters worse by not anticipating the negative consequences of their changes.

The source of the problem goes back to the traditional conclave rule that it takes a two-thirds vote to elect a new pope.

On the positive side, the two-thirds rule forces a conclave to elect as pope someone who has wide support, not someone who only has a slim majority of the cardinals behind him. Unity is an essential attribute of the church, and a consensus candidate is less likely to divide the church. This is especially important for someone who will hold the office for life.

Americans are aware of the problems that can arise in the U.S. Senate because of the supermajority (60%) required to end a filibuster. A minority of senators can stop the Senate from acting.

Likewise in a conclave, one-third plus one of the cardinals can stop a candidate from being elected pope. In most conclaves, this forces the majority to compromise by selecting an alternative candidate. He may not be people's first choice, but he is judged acceptable to most cardinals.

But in a few conclaves, the two-thirds rule has led to a deadlock.

Because of deadlocks, in the 13th century the papacy was vacant for a year and a half before the election of Innocent IV and for three and a half years before the installation of Gregory X.

In the first case the election was finally forced by the senate and people of Rome, who locked up the cardinals until a pope was chosen in 1243. In the second case, the people of Viterbo in 1271 not only locked the cardinals in, they tore off the roof of the building and put the cardinals on a diet of bread and water.

The name "conclave" comes from the Latin "locked with a key."

Such lengthy conclaves are the exception. The last conclave to go more than five days was in 1831: It lasted 54 days. Since the 13th century, 29 conclaves have lasted a month or more. Wars or civil disturbances in Rome were the usual cause of these lengthy interregnums. Sometimes, however, delays were caused by deadlocks among the cardinals. 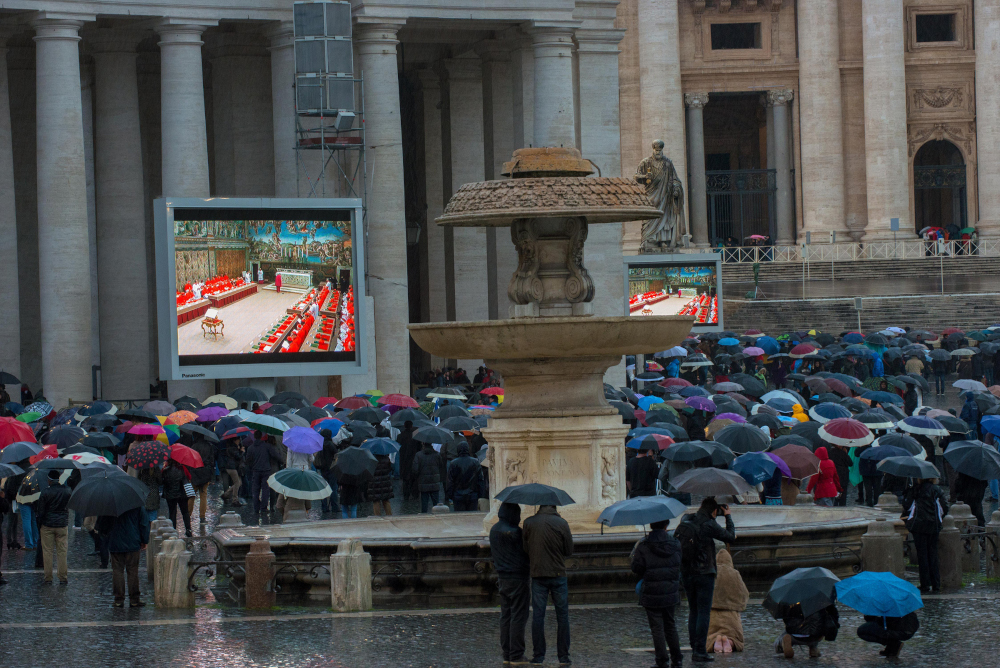 Faithful visitors holding umbrellas look at a giant screen showing the start of the 2013 papal conclave, under a statue of St. Peter on St. Peter's Square at the Vatican. (RNS photo/Andrea Sabbadini)

John Paul and Benedict appeared to fear a long conclave would scandalize people by showing divisions among the cardinals. In the old days before mass communications, few people would know or care how long it took to elect a pope. Today, the whole world is watching as the cardinals go into conclave. A long conclave would lead to concern and speculation.

The problem with John Paul's solution was that it eliminated the incentive for compromise. A simple majority of the cardinals know if they hold out for the required time, they will be able to elect their candidate. Knowing this, the other cardinals will give in and accept the majority's candidate rather than delay the inevitable and thus alienate the new pope and scandalize the public.

The new rule made it impossible for a minority of cardinals to stop the election of Joseph Ratzinger as pope at the 2005 conclave. If this rule were still in place today, it would probably lead to a new pope closer to Pope Francis than a pope elected through compromise.

Benedict's change made matters worse because it eliminated the possibility of the cardinals choosing a compromise candidate. They could be deadlocked with no way out if neither candidate could obtain a two-thirds majority.

It is ironic that two conservative popes broke with tradition to respond to a possible problem but instead created greater problems for the conclave. This is exactly the mistake conservatives accuse liberals of making

It is ironic that two conservative popes broke with tradition to respond to a possible problem but instead created greater problems for the conclave.

The simplest solution is for Francis to return the conclave to its traditional rule requiring a two-thirds vote of the cardinals to elect a pope.

In order to break a possible deadlock, the pope could also bring back the old rule of putting the cardinals on bread and water if they go on too long.

Meanwhile, the church might examine other possibilities — for example, using ranked-choice voting after 33 (or 34) inconclusive votes.

There are problems with this system. Ranked-choice voting was constructed for majority rule and could result in the top two candidates still having less than two-thirds of the vote. In that case, additional ballots could take place until someone received two-thirds.

The advantage of ranked voting would be to reveal people's second and third choices, which could eventually lead to a successful compromise.

The lesson from John Paul's and Benedict's foolish reforms is that tinkering with conclave rules requires wide consultation. Popes should not rely only on a small group of advisers. If they had issued draft proposals for churchwide discussion, people could have pointed out the problems before the changes were enacted.

The Vatican should learn from these mistakes. No changes should be made in church law without open and transparent discussions.