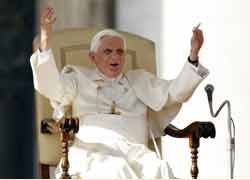 Unless the earth collides with another planet the day before, the July 10 meeting between Pope Benedict XVI and U.S. President Barack Obama, confirmed by the Vatican last week, ought to be a major news story on the strength of both style and substance.

At the level of style, it’s an odd-couple match made in Heaven. One can pick a favorite contrast: Obama the ultimate in hip, and Benedict the shy professor; Obama the icon of youthful vigor, Benedict now a venerable 82; Obama the master of 21st century communications, Benedict the occasionally PR-challenged pontiff; Obama the symbol of multiculturalism, almost a walking billboard for the United Colors of Benetton, versus Benedict the consummate old-world European.

Drilling down, however, the two men have more in common than may appear at first blush. Both are rock stars with their base (Obama among young liberals, Benedict among Catholic conservatives), and both have occasionally disappointed their fiercest ideological devotees. Notably, both have gone out of their way to show respect for the other; Benedict broke protocol to congratulate Obama even before he took office, and Obama has nominated a Vatican ambassador who doesn’t trip any wires over abortion.

Like the original odd couple, it’s therefore possible these seemingly mismatched figures may yet find a way to live together.

In terms of substance, every meeting between a pope and a president is noteworthy, because the United States is the world’s most important “hard power,” its greatest military and economic juggernaut, while the papacy wields the greatest “bully pulpit” among world religions. When these two forces are in alignment, history can change, as happened when the late Pope John Paul II and President Ronald Reagan helped set the dominoes in motion that led to the collapse of communism.

Yet the July 10 meeting between Benedict and Obama, the first between the two leaders, looms large even in this heady context.

For one thing, it has obvious American political subtext. Despite his strong approval ratings, Obama faces two major centers of opposition: Fiscal conservatives who believe his economic policies amount to “generational theft,” and social conservatives focused on matters such as abortion and gay rights. The latter constituency is buoyed by pro-life Catholics, including a number of American bishops. But there’s also a more Obama-friendly wing of the American church, again including some bishops, which accents issues such as poverty relief, international peace-making, immigration reform and health care.

If Benedict takes Obama to task on abortion, as he did with House Speaker Nancy Pelosi last February, it could strengthen American Catholics eager to challenge the administration. But if the meeting has a more positive tone, focused on areas of common ground, it could prove a boon for Catholics seeking constructive engagement.

One bit of timing may favor a meeting of minds: The July 10 encounter should take place just days after Benedict releases his new social encyclical, “Truth in Charity,” in which the pope is likely to argue for robust public intervention in the economy to defend the poor -- an area where the economic philosophy of the Obama administration and the pope’s social teaching seem, at least in a big-picture sense, to have some affinity.

Internationally, senior Vatican diplomats have long felt that Obama may be better suited to some of the church’s foreign policy concerns than his immediate predecessor, George Bush. That’s a core reason that L’Osservatore Romano, the Vatican newspaper, has been basically friendly to Obama, even insisting that he’s not a “pro-abortion president.” In particular, Pope Benedict’s top inter-faith priority these days is promoting an “alliance of civilizations” with Islam, and Vatican officials were favorably impressed by Obama’s outreach to the Islamic world in his June 4 speech in Cairo.

All that should be on the agenda during the July 10 meeting. If the event follows normal protocol, senior American and Vatican officials will also sit down for longer talks following the pope’s session with the president.

One point that’s not yet clear is whether Obama’s new ambassador to the Vatican, Catholic theologian Miguel Diaz, will be on the job when the pope and president get together. To date, the Senate has not yet scheduled a confirmation hearing for Diaz. In the past, however, those sessions for Vatican ambassadors have rarely taken more than a few hours, and it’s possible that a Senate vote could be scheduled in time to allow Diaz to be present.

[John L. Allen Jr. is NCR senior correspondent. He is in Rome June 29 through July 10 to cover among other things, the meeting between the pope and the president.]

Vatican | Benedict-Obama: Much in common