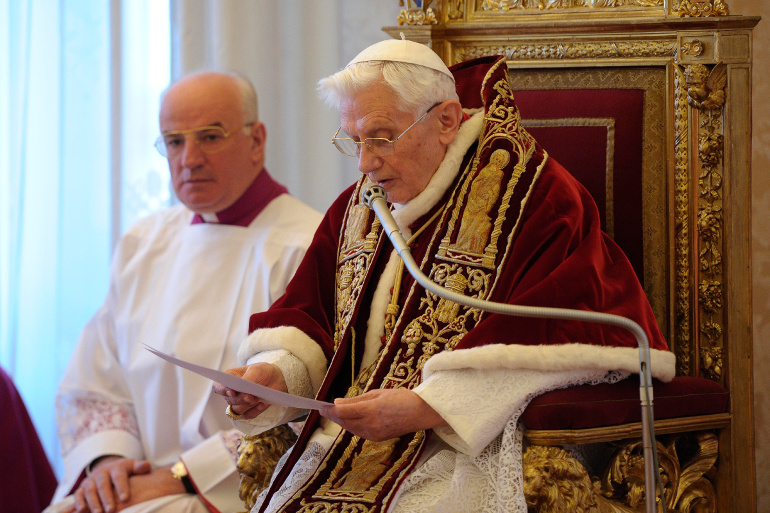 Pope Benedict XVI reads his resignation in Latin during a meeting of cardinals at the Vatican Feb. 11, 2013.(CNS/L'Osservatore Romano)

VATICAN CITY -- As the anniversary of his surprising resignation approaches, Pope Benedict XVI has rejected as “simply absurd” the speculation that he was forced to step down, and he said he still wears the distinctive white papal cassock for “purely practical reasons.”

“At the moment of my resignation there were no other clothes available,” Benedict wrote in a brief letter to an Italian journalist that was published on Wednesday.

The emeritus pope also said that he kept the name Benedict, rather than reverting to his birth name of Joseph Ratzinger, because it was a simple solution.

Rumors that this signaled he remained something of a “shadow pope” to his successor, Pope Francis, were “another case of completely unfounded speculations being made.”

The same goes for reports that he was pushed to resign because of scandals in the Vatican.

“There isn’t the slightest doubt about the validity of my resignation from the Petrine ministry,” Benedict wrote to Andrea Tornielli, a veteran Vatican reporter with La Stampa newspaper.

“The only condition for the validity is the complete freedom of my decision. Speculations about the invalidity of my resignation are simply absurd.”

Benedict, who is 86 and frail, said Feb. 11, 2013 that he intended to resign because “I have come to the certainty that my strengths, due to an advanced age, are no longer suited to an adequate exercise of the Petrine ministry” — meaning his role as the 264th successor to St. Peter.

His resignation took effect on Feb. 28, 2013, making him the first pope in 600 years to retire rather than die in office. Benedict left the Vatican for the papal summer residence outside Rome until the College of Cardinals elected a successor, which they did on March 13, 2013 choosing Cardinal Jorge Bergoglio of Buenos Aires, who took the name Francis.

But Benedict’s decision to keep his papal name and white clothing and to return to live in a converted monastery inside the Vatican walls led to concerns and speculation that his presence would raise doubts about the authority of the current pope.

In his letter to Tornielli, Benedict also confirmed that he had written, in a letter to Swiss theologian Hans Kung, a longtime friend and intellectual rival, that he was “bound by a great identity of views and a heartfelt friendship with Pope Francis” and that he sees “my last and final job to support his pontificate in prayer.”

“Professor Kung quoted the content of my letter to him word for word and correctly,” Benedict wrote. He concluded by saying that he hoped he had answered Tornielli’s questions in “a clear and adequate way.”

There have been persistent reports that Benedict was forced to step down because of the many scandals and controversies in the Roman Curia that had plagued his papacy in its final years.

Chief among them was the so-called Vatileaks crisis, when internal memos passed to the media by the pope’s own valet detailed infighting and intrigue in the papal court. There were also sex and money scandals involving Vatican officials and workers that raised the specter that church leaders were subject to blackmail.

A Frontline documentary that premiered Tuesday on PBS, titled “Secrets of the Vatican,” recounts these and other scandals and asks whether Francis will be able to clean house as the cardinals who elected him hope. A Catholic News Service review of the program said it had some good material but “turns out to be, in large part, both sloppy and one-sided.”

Tornielli said he wrote to Benedict on Feb. 16 this year about the rumors over why he resigned and received a response two days later.

Benedict’s letter is the latest example that the former pope will not remain entirely “hidden from the world,” as he put it last year. He is in good health, say many of the visitors who meet with him at his Vatican residence, and he keeps up a steady correspondence with friends and those who write to him.

He has participated in a number of private events, as well, and then he attended the service in St. Peter’s Basilica at which Pope Francis created his first batch of new cardinals Feb. 22. It was Benedict’s first public appearance at a liturgy and occasioned much comment inside the basilica and among church pundits.

But it was Francis who invited Benedict to take part, and the former pope insisted on sitting in a chair in front of the altar with the cardinals. He also doffed his white skullcap in a sign of respect and deference when Pope Francis came over to greet him, and — as he noted in the letter to Tornielli — he does not wear the short cape or other accoutrements that are signs of the papal office.

Benedict’s appearance at Vatican events will not become a regular occurrence, and “this does not in any way signify that he is, so to speak, getting back in the game,” Archbishop Georg Gaenswein, Benedict’s longtime personal aide, told The Washington Post.

He said the two popes have become friends, and he said Benedict is not envious of Francis’ popularity “because he sees that celebrity as helping the faithful.”

“Pope Francis’ style is quite different, though that doesn’t mean that the content is better,” Gaenswein said. “But his style created much interest among the faithful and also outside of the church.”