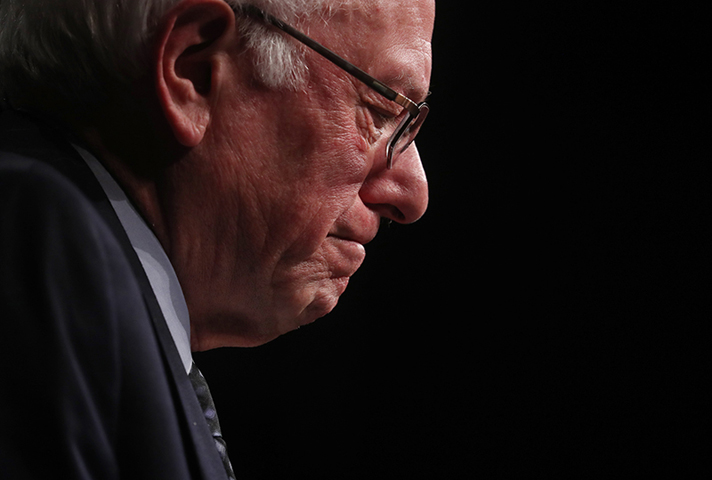 Democratic presidential candidate Sen. Bernie Sanders pauses as he speaks to supporters on the night of the Michigan, Mississippi and other primaries at his campaign rally in Miami on March 8, 2016. (Reuters/Carlo Allegri)

Pope Francis is not expected to grant an audience to Democratic presidential candidate Bernie Sanders in Rome this week, dashing hopes that the U.S. senator could win the backing of the popular pontiff -- or at least the most coveted photo-op on the planet.

A Vatican official speaking on condition of anonymity said April 13 that there is no meeting scheduled between the pope and Sanders, who will visit the Vatican on Friday to speak at a conference.

"We don't expect there to be one," the official said.

The Vatican representative did not absolutely rule out a last-minute change to the program, however, reflecting Francis' unpredictable nature. "Never say never," the official said.

But the debate over the pope and U.S. politics could be renewed again later this month with the announcement that Vice President Joe Biden will visit the Vatican later this month to discuss his campaign to find a cure for cancer at a conference on regenerative medicine organized by the Pontifical Council for Culture.

Ever since it was announced last week that Sanders would be coming to speak at a Vatican conference on economic justice, there has been widespread speculation about who invited Sanders; why his chief rival, Hillary Clinton, was not invited as well; and whether this would help or hurt Sanders, a secular Jew who has often praised the Roman Catholic pontiff's stands on social issues.

But the chief spokesman at the Vatican, Jesuit Fr. Federico Lombardi, was quick to assert that the Democrat had not been invited by Francis.

Lombardi said the call came from Bishop Marcelo Sanchez Sorondo, chancellor of the Pontifical Academy for Social Sciences, which receives Holy See funding and is hosting the conference inside the Vatican walls.

During his visit, Sanders will give a 10-minute speech about "The Urgency of a Moral Economy," as part of a two-day event reflecting on the 25th anniversary of a landmark encyclical by St. John Paul II.

Sanders' arrival at the Vatican comes just days ahead of the April 19 primary in New York, a key test in the ongoing race against Clinton for the Democratic nomination.

Meetings between candidates and foreign leaders are rare, and the Vatican will be cautious of the pontiff weighing in on the U.S. presidential debate. Francis has already caused a storm by describing the views of Donald Trump, a Republican candidate, as "not Christian."

Trump's views on immigration and his suggestion of a blanket ban on Muslims entering the U.S. have been viewed with alarm in Europe and stand at odds with Francis' open view on migration and interfaith dialogue.