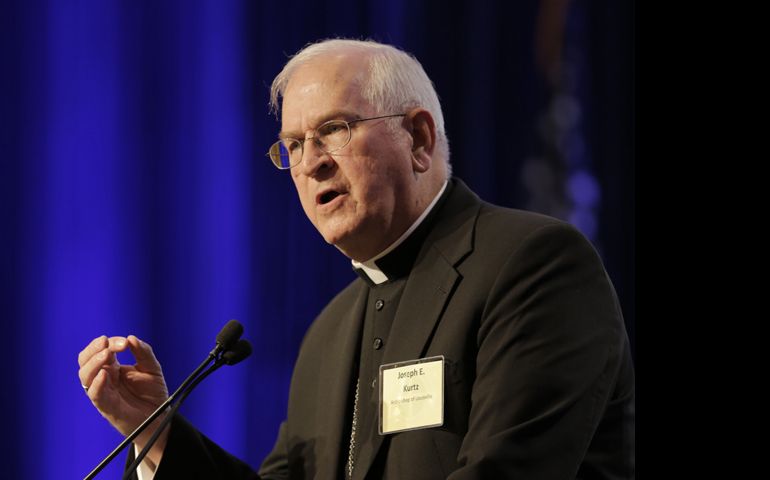 Baltimore — Highlighting Pope Francis's instructions to the hierarchy during his recent trip to this country, the president of the U.S. Conference of Catholic Bishops opened the body's annual fall meeting with a reflection on the upcoming year of mercy, urging that bishops' lives be at the service of those most in need.

The list of "vital issues of pastoral care" demanding attention is long, said Archbishop Joseph Kurtz of Louisville. From protecting life at its beginning and end, to welcoming immigrants, "healing racial tensions and seeking a harmony based on the dignity of each person, reaching out to the poor. Our schedule must be their needs," he said, "and our example must be the Lord Jesus Himself, whose presence daily guides us and strengthens us for this work."

Pope Francis has declared a jubilee focused on mercy to run from December 2015 through November 2016.

The heads of the more than 195 dioceses and eparchies that comprise the national bishops' conference are meeting Nov. 16-19 in Baltimore. Up for discussion are "strategic priorities" that are to be the conference's focus through the year 2020, a discussion that drew some pointed debate during the group's spring gathering.

The bishops will also vote on a new introductory note and "limited" revision to "Forming Consciences for Faithful Citizenship," a quadrennial statement issued the year before each presidential election.

The most urgent language of Kurtz' speech was reserved for the issue of religious liberty and perceived threats to the church's presence and work in the public square. Although Pope Francis made sparing reference to the matter during his U.S. visit, Kurtz quoted Francis stating that religious liberty "transcends places of worship and the private sphere of individuals and families. Because religion itself, the religious dimension, is not a subculture; it is part of the culture of every people and every nation."

"What a great tragedy it will be," said Kurtz, "if our ministries are slowly secularized or driven out of the public square because of short-sighted laws or regulations that limit our ability to witness and serve consistent with our faith."

The challenges and crises addressed by church ministries, said Kurtz, include environmental degradation, excessive consumption of material goods, persecution of Christians and other religions around the globe, unjust economic policies, "a broken immigration system and a worldwide refugee crisis" as well as "wars, terror, and violence that threaten every aspect of human life and dignity."

Religious freedom, said Kurtz, "is not a freedom of special privilege but a freedom that makes room for witness and service in a manner consistent with our faith and mission. ... Let us pray we don't lose our presence in the public square to a misguided secularization that reduces faith to the least common denominator and erodes the very riches of belief that impels people of faith to serve unselfishly those most in need."

Asking the assembly to include on the agenda discussion of the recent synod, Kurtz, who was a delegate to the three-week world meeting of bishops in Rome in October, said that one of the greatest insights he gleaned from the synod was "the recognition of families as ministers of the gospel," and "not simply objects, receiving from us who serve."

He spoke of his experience of family, and particularly of his brother Georgie, who had Down Syndrome, and who was considered a "special part of our family." Georgie lived with Kurtz, who cared for him, until Georgie's death in 2002.

Kurtz said that while much media attention at the synod focused on debates about pastoral care for families distant from the church, "under-reported was the wide agreement on the priority of calling forth, properly forming and supporting families who faithfully and often heroically witness to family life, inspiring others in the church and society."

The bishops are also expected to adopt a statement on pornography. "Producing or using pornography is a mortal sin that needs to be confessed in order for the person to receive God's forgiveness," says the draft version of "Create in Me a Clean Heart: A Pastoral Response to Pornography."

Pope appoints 14 couples to attend Synod of Bishops on family