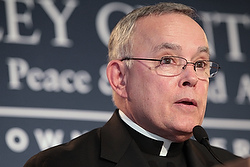 The Australian Catholic diocese of Toowoomba, encompassing more than 300,000 square miles, has just a relative handful of healthy priests to serve the church’s 35 parishes. So it came as no surprise to Toowoomba’s Catholics when the area’s bishop, William M. Morris, addressed the priest shortage in a candid but still cautious Advent 2006 pastoral letter.

“We do face an uncertain future with regard to the number of active priests in our diocese,” wrote Morris. “Other options,” he wrote, “may well” need be considered. These include:

For these words, this week the Vatican announced that Pope Benedict XVI has fired Morris. Eighteen years as bishop ended with the stroke of a papal pen. (Click here for original the news story about the Morris firing.)

First, it turns out it’s really not that difficult for the pope to give a bishop a pink slip. In the course of the quarter-century clergy sexual abuse cover-up, there’s been considerable handwringing over just this question. Bishops don’t “work for” the pope, we have been told. Bishops are “fathers” to their flock – with all the unconditional love and commitment that entails – not employees subject to the whims, well-intentioned or otherwise, of the boss. Canonical procedures must be followed.

Apparently, that’s just so much hooey. If the pope and his advisers care deeply about an issue about which a bishop has publicly raised questions – such as women priests and optional celibacy – a way can be found to dismiss that bishop.

And – noteworthy because it goes to some underlying issues – a bishop who acts against church teaching and law related to sexually abusive priests apparently need fear no such reprisal.

Philadelphia Cardinal Justin Rigali, for example, continues a life befitting a prince in splendorous surroundings, even as his flouting of church procedures (and perhaps civil law) resulted in nearly 30 diocesan priests facing administrative suspension and heat from local prosecutors.

And not to forget Cardinal Bernard Law, orchestrator of the Boston clergy abuse cover-up. His punishment? An extended Roman holiday and a healthy pension. Meanwhile, Morris gets the door.

The pope’s priorities are clear.

The pervasive intellectual chill in the church reaches beyond the towers of academia (note the recent chastisement of theologian St. Joseph Sr. Elizabeth Johnson) or to those who directly challenge the rules – Maryknoll Fr. Roy Bourgeois’ open support for women’s ordination a most recent case in point. (Bourgeois is facing excommunication for saying what he thinks on the subject.)

Now even those directly in the line of apostolic succession are forbidden to speak freely.

Note that Morris did not offer answers to the provocativelyposed semi-questions on celibacy and ordination he raised that Advent. Instead, employing what one advocacy group terms the “progressive bishop’s style book,” he couched his concerns more obliquely. (No doubt to avoid Rome’s wrath. Lot of good that did him.)

Today, it seems, even such carefully couched queries are completely verboten; such so-called “open questions” (non-doctrinal in every sense of the word) such as the ordination of married men are grounds for dismissal. That the overwhelming majority of clergy (not to mention laypeople) think the failure to even consider options like married priests in the midst of a clergy shortage crisis goes beyond Dilbertesque mismanagement. It is, to employ the psychobabble of the era, completely dysfunctional.

As we prepare to celebrate the feast of the first pope next month, are we still permitted to remind church fathers that Peter was a married man? That this Holy Father was likely a human father? Or should Mrs. Peter and her progeny, like so many nettlesome Stalin-era apparatchiks, be airbrushed from history?

Because of Morris, we know that the dysfunction flows right from the top. Canon law may be more flexible than previously promoted, but a bishop’s dismissal cannot be shuffled to an underling, buried, as in Bourgeois’ case, in a bureaucratic chain of command. No, the canning of a bishop is a task only a pope can command.

And he has made his priorities quite clear.

While the reasons for Morris’ dismissal are relatively clear, the process remains an unholy mess, shrouded in secrecy.

Soon after Morris’ 2006 Advent pastoral was released, Benedict sent Denver Archbishop Charles Chaput to “investigate” the incident, which is a little like sending the fox to investigate the hens. Given his well-known views on the concerns raised by Morris (Chaput is more Catholic than the pope on these issues), we are skeptical that Toowoomba’s bishop got a fair hearing. There’s a relatively small number of right wing Catholics in the diocese (Morris and others call them the “Temple Police”) who have long been after the bishop. That Chaput gave them undue weight and deference seems more than plausible.

You know the type. In the U.S., they are the crowd that takes marching orders from The Wanderer, their time at Mass searching for a violation of a rubric rather than receiving whatever wisdom or grace might come their way. Then, having detected an “Alleluia” where an “Amen” was called for, they write letters to Vatican congregations, hoping for a sympathetic ear to their pathetic pleas.

Their Australian equivalents were, it appears, successful in transforming Morris’ molehill into a mountain.

But, we acknowledge, our skepticism is partly emotional, or perhaps ideological. We’re inclined to give Morris a break because we’re inclined to agree with him that the issues he raises require airing.

But, and here’s the point, we simply don’t know what Chaput found because no one’s talking. Not even Morris has received a copy of Chaput’s report (assuming something has been reduced to writing).

We presume, given the public nature of Morris’ offenses, that Chaput’s findings have something to do with the bishop brainstorming some remedies to the priest shortage in the face of the real crisis in his local church.

Did Chaput find something more dastardly, such as a bishop speaking like an adult to his church? Heaven forbid. We likely will never know. When NCR asked Chaput to respond to a series of questions regarding his apostolic visitation to Morris’ diocese, he declined to answer, explaining that “any apostolic visitation is governed by strict confidentiality. This is for the benefit of all parties involved.”

So are we to believe Morris has benefitted from being tossed out without ever having been allowed to defend himself against Chaput's findings, which were never shared with the Australian prelate? This is the kind of trial and judgement one more often associates with China or Iran. The Catholic church?

The real scandal to the faithful in this matter has nothing to do with the way Morris has conducted himself. It has everything to do with priorities and processes within our church today. It has much to do with the trampling of human rights and professed values of decency and charity by our church’s prelates, in this case including, sad to say, Benedict himself.

This is no way, shall we say, to set a Christian example – or manage the church.

In 2003, Fred Gluck, a former managing partner of McKinsey & Company who currently serves on the board of the National Leadership Roundtable on Church Management, wrote a memo to church leaders. It’s crafted in managementese, but disregard the jargon for the moment and pay attention to the message.
Wrote Gluck:


No one in a position of authority paid any discernable attention to Gluck eight years ago. Sadly, we don’t expect that to change.

The pope has made his priorities all too clear.