Candor creep about the pope 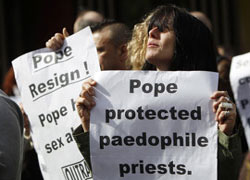 For the outside world, the news flash from Pope Benedict XVI’s Easter Sunday Mass may have been that he did not allude to mounting criticism on the sex abuse crisis. Among insiders, who never expected the pope to do so on the holiest day of the year, the surprise was not so much that Benedict didn’t say anything, but that someone else did.

In a significant departure from normal practice, Italian Cardinal Angelo Sodano, a former Vatican secretary of state under John Paul II and still the dean of the College of Cardinals, rose to defend the pope.

“The people of God will not allow themselves to be swayed by the petty gossip of the moment,” Sodano said, calling Benedict the “unfailing rock” of the church.

Sodano’s timing may have been unusual, but not his basic message. All across the Catholic world, senior prelates and other voices in the church have rushed to defend the pope and to accuse the media of a smear campaign.

Cardinal William Levada, an American who holds the pope’s old job as prefect of the Congregation for the Doctrine of the Faith, singled out The New York Times for reporting he called “deficient by any reasonable standards of fairness.” Cardinal Angelo Scola of Venice, Italy, asserted that Benedict has been the target of “deceitful accusations,” and Archbishop Kazimierz Nycz of Warsaw, Poland, said the church must say “no, in the name of truth and justice” to such attacks.

On April 6, Vatican Radio denounced a “media campaign of anti-Catholic hatred” behind the critical attention to Benedict’s record.

For those who recall the early tone in the United States in 2002, when the crisis began to erupt here, the parallels cannot help but seem striking. Then, too, church officials in the initial wave of reaction often struggled to distinguish between ax-grinding and legitimate criticism, and blamed the media for bias.

Over time that tone shifted, as bishops and other church leaders became more willing to acknowledge the gravity of past mistakes. Benedict’s three public apologies for the crisis, most recently in his pastoral letter to Ireland, offer cases in point. In effect, Catholic officialdom developed an argot for talking about the corporate failures of the church.

The question now is: Can the church develop a similar vocabulary for talking about possible errors by a pope?

To be sure, church officials may have a point when they insist that Benedict, before and after becoming pope, did more to promote an aggressive response to the crisis than any other senior Vatican official. Yet revelations about cases from the pope’s term as archbishop of Munich, Germany, his quarter-century at the Congregation for the Doctrine of the Faith, and even the period since his election are also raising hard questions.

In principle, there’s no reason why Catholic leaders couldn’t acknowledge failures, if that’s what at least some of these cases represent, in Benedict’s record. Papal infallibility applies only to teaching on faith and morals, which is no guarantee that every administrative judgment call is protected from error. Indeed, when popes come up for canonization, Vatican spokespersons routinely insist that declaring a pope a saint is not to ratify every policy choice of his pontificate.

Pope John Paul II actually offered a model for acknowledging mistakes in which popes were complicit. On March 12, 2000, he led a “Day of Pardon” ceremony asking forgiveness for various sins of the church, including the Crusades and the Inquisition; excommunications and persecutions; and sins against the Jewish people.

Those failures occurred in the distant past, but there are subtle indications that the time limit on candor is creeping closer to the present. Cardinal Christoph Schönborn of Vienna, Austria, recently said that then-Cardinal Joseph Ratzinger, now Pope Benedict, had wanted to investigate charges that Vienna’s former Cardinal Hans Hermann Groër molested novices at a Benedictine monastery in the 1970s, but was blocked by John Paul II.

Schönborn said Ratzinger told him at the time, “The other side won.”

Schönborn intended that as a defense of Benedict, but it was also implicitly a criticism of John Paul, or at least the coterie of advisors who prevailed upon him to leave Groër alone.

The question now is whether senior officials can bring themselves to acknowledge that even an incumbent pope may have stumbled, either before or after his election.

As painful as it might be, crossing that bridge could work in Benedict’s favor. The church might not only win points for honesty, but people might be more inclined to listen to a defense of the pope’s overall record.

There is, however, a catch. Decisions about predator priests are hardly the only prudential judgments popes have to make, so if a sitting pope’s record on sex abuse becomes fair game, who’s to say his decisions in other areas won’t draw new scrutiny?

Many churchmen might be reluctant to unseal that Pandora’s box, but the present crisis could well pry it loose anyway.

Vatican | Candor creep about the pope