Cardinal Kasper is the 'pope's theologian' 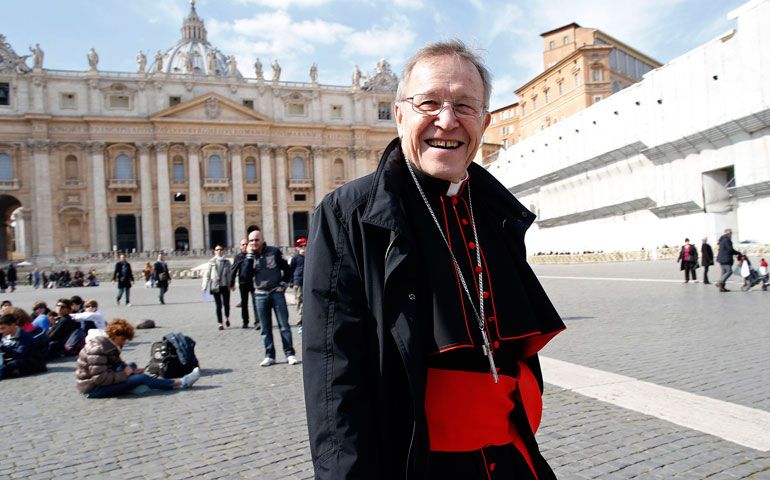 To hear Cardinal Walter Kasper tell it, he became the pope's point man for reform in the Catholic church thanks to a bit of serendipity, or, if you will, Providence, before anyone knew that Francis was going to be the next Roman pontiff.

The genesis of their partnership, Kasper recalled during a recent trip to New York, was a fateful encounter that took place a few days before last year's conclave, when all the electors in the College of Cardinals from around the world were staying in the Vatican guesthouse.

Kasper's room happened to be right across the hallway from that of Cardinal Jorge Mario Bergoglio of Buenos Aires, Argentina. A renowned German theologian who had just turned 80, Kasper had recently received a Spanish translation of his latest book, Mercy: The Essence of the Gospel and the Key to Christian Life. He brought a couple copies with him and gave one to Bergoglio.

"Ah, mercy!" the Argentine cardinal exclaimed when he saw the title. "This is the name of our God!"

The two men knew each other a bit -- Kasper had been to Buenos Aires several times on church business -- but it turns out Bergoglio's reaction wasn't just one of those pro forma compliments you might give to an acquaintance at a book party. Mercy had long been a guiding principle for Bergoglio's ministry, and he devoured Kasper's original, wide-ranging study in the days leading up to the voting.

Then, on the evening of March 13, it was Bergoglio who emerged on the balcony of St. Peter's Basilica as Pope Francis. Four days after that, the new pope addressed a huge crowd in the square -- and as a surprised Kasper watched on television, he heard Francis praising him as a "very sharp theologian" and effectively blurbing his work: "That book has done me so much good," Francis said.

"But don't think I do publicity for the books of my cardinals!" the new pontiff quickly added.

Too late. The subsequent editions of Kasper's book led with Francis' praise above the title, and ever since Kasper has been enjoying the kind of influence that a short time ago would have been as unimaginable as, well, the kinds of reforms that Francis has been promoting.

For years, Kasper had been an odd man out in the Roman power structure. When he was a bishop in Germany in the 1990s, Kasper led efforts to try to persuade Pope John Paul II to find a way to allow divorced and remarried Catholics to receive Communion. But that was thwarted by conservatives in Rome, led by another German theologian, Cardinal Joseph Ratzinger, John Paul's longtime doctrinal czar.

Kasper continued to push for reforms, however, often sparring with Ratzinger in the pages of Catholic journals. Still, John Paul made Kasper a cardinal in 2001 and later named him head of the Vatican department for relations with other churches.

The post turned out to be something of a way station for Kasper, and when John Paul died in 2005 there were some who pitched Kasper as the last great hope for a progressive turn in the church: "Kasper the Friendly Pope," as some quipped.

Instead, it was Ratzinger, Kasper's longtime rival, who emerged from the Sistine Chapel as Pope Benedict XVI, apparently cementing the church's turn toward conservatism. Kasper retired and settled down to writing books on topics such as mercy.

After Benedict announced he was resigning, Kasper once again entered the conclave by another stroke of fortune: Cardinals over 80 are barred from voting for a new pope, and Kasper's 80th birthday was March 5 -- one day after the cardinals began deliberating. He made it by just 24 hours.

To be sure, Francis shares a passion for mercy with Kasper. But he also relies on Kasper not only to provide the theological underpinnings for his views but also as a kind of front man to sell Francis' push to renew Catholicism.

"This pope is not a liberal pope. He is a radical pope!" Kasper said as he sat in an office at the Church of St. Paul the Apostle on Manhattan's Upper West Side during a weeklong U.S. sojourn. "This pope goes back to the Gospel."

After Francis publicly praised Kasper's work, an older cardinal in Rome came to the pope and insisted: "Holy Father, you should not recommend this book! There are many heresies in it!" The pope smiled as he told Kasper the story, and reassured him: "It goes in one ear and out the other."

Further proof of Francis' trust in Kasper came in February when the pope tapped him to deliver a lengthy talk for a meeting of all the world's cardinals who had gathered to discuss updating the church's policies on a range of hot-button issues.

The meeting, or consistory, was the first in a series of discussions that Francis has planned to jump-start long-stalled talks on contentious topics — one of them whether divorced and remarried Catholics can receive Communion. It's not the sexiest topic but it is a huge pastoral crisis, given that so many Catholics have remarried without an annulment and are barred from the altar rail. Even a murderer can confess and receive Communion, as Kasper likes to note.

"I told the pope, 'Holy Father, there will be a controversy afterward,' " Kasper said. The pope laughed and told him: "That's good, we should have that!"

Sure enough, fierce criticisms tumbled in.

"Such a shift wouldn't just provoke conservative grumbling; it would threaten outright schism," warned New York Times columnist Ross Douthat. Phil Lawler, editor of Catholic World News, agreed that such a change was beyond the pale: "The Kasper proposal, in anything approaching its current form, is unworkable," he wrote.

To be sure, Kasper himself did not exactly tamp down the flames in his recent appearances at Catholic campuses and in interviews with U.S. media.

Speaking to the liberal Catholic magazine Commonweal, for example, Kasper said the pope himself "believes that 50 percent of marriages are not valid" — an assertion that left many conservatives aghast. "I am stunned at the pastoral recklessness of such an assertion. Simply stunned," wrote canon lawyer and popular blogger Edward Peters.

At a public talk at Fordham University in New York, Kasper also irked the right, and pleased the left, when he tweaked the Vatican's doctrinal chief, Cardinal Gerhard Müller, who had just delivered a blistering critique of leaders of most American nuns. Kasper expressed his "esteem" for Müller and said his office tended to take a "narrow" view and must be more open to dialogue and change. That, too, sparked a fresh round of complaints.

Despite the pushback, colleagues describe Kasper as rejuvenated by the reform Francis has launched.

"I do not know if my proposals will be acceptable," the cardinal said with a shrug. "I made them in agreement with the pope; I did not do them just myself. I spoke beforehand with the pope, and he agreed."

Kasper's ideas are controversial not so much for their content but because at heart they are about whether and how the church can change.

"Change is always a risk," Kasper said. "But it's also a risk not to change. Even a greater risk, I think."

Kasper said he was confident that the process of debate that Francis had launched on the topic of family life and sexuality would in the end produce some significant reforms, in part "because there are very high expectations."

He noted that the church has often changed, or "developed," over the centuries, and quite recently in the 1960s when, for example, the Second Vatican Council reversed long-standing teachings against religious freedom and dialogue with other believers.

Kasper reiterates that he's not advocating a change in the church's dogma on the sanctity of marriage, but a change in the "pastoral practice" about who can receive Communion. "To say we will not admit divorced and remarried people to holy Communion? That's not a dogma. That's an application of a dogma in a concrete pastoral practice. This can be changed."

Kasper said it is the voice of the faithful that has made the difference. "The strongest support comes from the people, and you cannot overlook that," he said.

"If what people are doing and what the church is teaching, if there is an abyss, that doesn't help the credibility of the church," he said. "One has to change."

If a brother, why not a sister in the synod?

Will Pope Francis' strong message meet resistance in US?