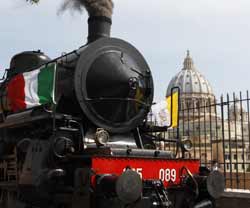 A vintage train, dubbed the Caritas Express, travels from the Vatican train station for a journey to Orvieto May 21. The train ride was part of the 60th anniversary celebrations of Caritas Internationalis. (CNS photo/Paul Haring)

ROME -- Members of Caritas Internationalis elected an official from the French charity Secours Catholique to be their secretary-general and they re-elected Honduran Cardinal Oscar Rodriguez Maradiaga of Tegucigalpa as president of the confederation of 165 Catholic charities.

Michel Roy, director of international advocacy for the French Catholic charity, was elected by regional representatives making up the Caritas executive committee. His election was confirmed May 26 by delegates to the Caritas Internationalis general assembly.

A 56-year-old father of two children, Roy was a student of economics and Oriental languages at Sorbonne University when he began volunteer work with Southeast Asian refugees for Secours Catholique in 1976. He joined the Paris archdiocesan staff in 1981 and served as national director from 1993 to 1999.

Roy was elected to a four-year term after the Vatican Secretariat of State withheld its approval for the current secretary-general, Lesley-Anne Knight, to stand for a second term.

Addressing the assembly immediately after the vote, Roy said, "I'm very moved by this. I'd like to thank Lesley-Anne for the work she's done so far and also all of you for the work that you do for this network which reflects the hopes of the poor to build a better world."

Cardinal Rodriguez was elected May 24 to a second four-year term as president, winning about 75 percent of the votes from delegates from the confederation's member organizations, which include the U.S. bishops' Catholic Relief Services and the Canadian Catholic Organization for Development and Peace.

At the opening of the general assembly, Cardinal Rodriguez said the way the Vatican handled Knight's case caused hurt among Caritas members.

In his formal president's report to the assembly the morning before his re-election, the cardinal spoke about the issue at the center of the discussions between the Vatican and Caritas Internationalis: strengthening the Catholic identity of Catholic charitable activities, staff members and volunteers.

The cardinal said, "Caritas is not simply a nongovernmental organization -- it is much more. Caritas is a sign of the love of God for all humanity. It is a love that knows no bounds or boundaries."

"Caritas gives witness to God's love among us, a love for all people and especially for the poorest. Our experience and our formation of the heart through the encounter with Christ in the stranger and the marginalized transforms Caritas in its daily work into an authentic witness of God's love present in our world," he said.

Do not seek honor, but serve, pope tells new bishops