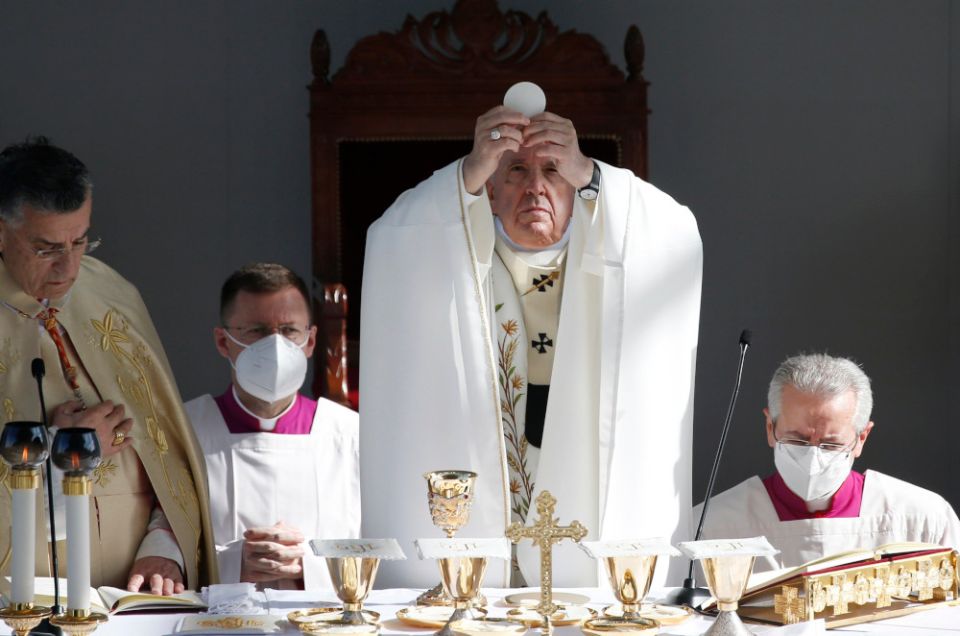 Pope Francis elevates the host as he celebrates Mass at the GSP Stadium in Nicosia, Cyprus, Dec. 3, 2021. (CNS/Paul Haring)

Vatican City — The "sense of mystery" and awe Catholics should experience at Mass is not one prompted by Latin or by "creative" elements added to the celebration, but by an awareness of the sacrifice of Christ and his real presence in the Eucharist, Pope Francis said.

"Beauty, just like truth, always engenders wonder, and when these are referred to the mystery of God, they lead to adoration," he wrote in an apostolic letter "on the liturgical formation of the people of God."

In the letter, Francis insisted that Catholics need to better understand the liturgical reform of the Second Vatican Council and its goal of promoting the "full, conscious, active and fruitful celebration" of the Mass.

"With this letter I simply want to invite the whole church to rediscover, to safeguard and to live the truth and power of the Christian celebration," the pope wrote. "I want the beauty of the Christian celebration and its necessary consequences for the life of the church not to be spoiled by a superficial and foreshortened understanding of its value or, worse yet, by its being exploited in service of some ideological vision, no matter what the hue."

"The priestly prayer of Jesus at the Last Supper that all may be one judges every one of our divisions around the bread broken, around the sacrament of mercy, the sign of unity, the bond of charity," he said.

While his letter offered what he called a "meditation" on the power and beauty of the Mass, Francis also reiterated his conviction of the need to limit celebrations of the liturgy according to the rite in use before the Second Vatican Council.

The liturgical books approved by "the holy pontiffs St. Paul VI and St. John Paul II," he said, "have guaranteed the fidelity of the reform of the council."

Although the post-Vatican II Mass is celebrated in Latin and dozens of vernacular languages, he said, it is "one and the same prayer capable of expressing her (the church's) unity."

"As I have already written, I intend that this unity be reestablished in the whole church of the Roman rite," he said, which is why in 2021 he promulgated Traditionis Custodes (Guardians of the Tradition), limiting celebrations of the Mass according to the rite used before the Second Vatican Council. 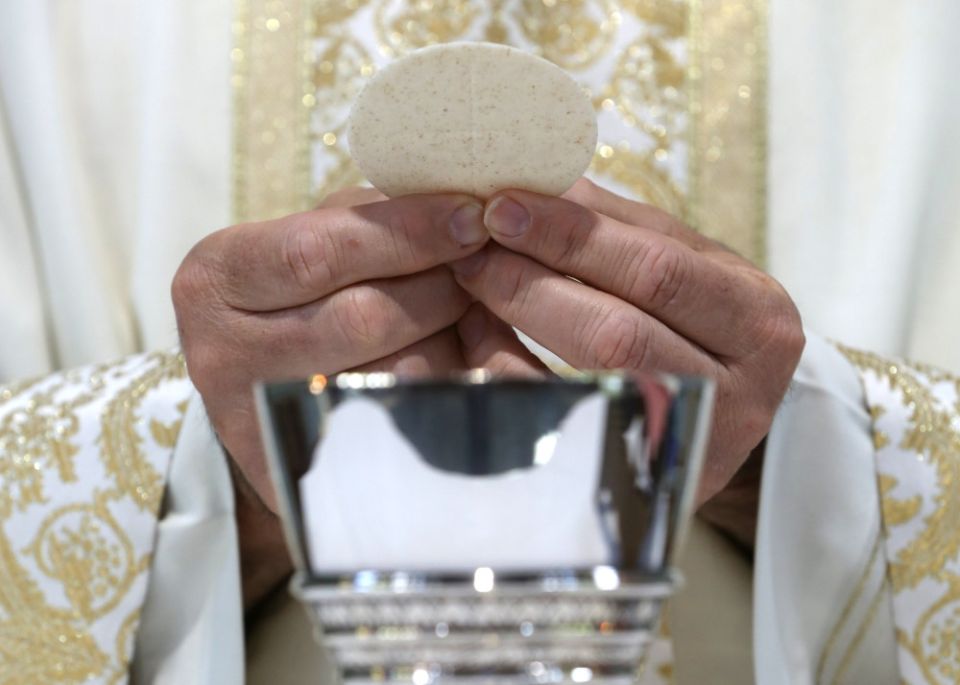 A priest holds the Eucharist in this illustration taken May 27, 2021. The "sense of mystery" and awe Catholics should experience at Mass is prompted by an awareness of sacrifice of Christ and his real presence in the Eucharist, Pope Francis said in a document released June 29, 2022. (CNS/Bob Roller)

The bulk of the pope's new letter focused on helping Catholics learn to recognize and be astounded by the great gift of the Mass and the Eucharist and how it is not simply a weekly "staging" or "representation" of the Last Supper but truly allows people of all times and all places to encounter the crucified and risen Lord and to eat his body and drink his blood.

And, the pope wrote, it is essential to recognize that the Mass does not belong to the priest or to any individual worshipper, but to Christ and his church.

"The liturgy does not say 'I' but 'we,' and any limitation on the breadth of this 'we' is always demonic," he said. "The liturgy does not leave us alone to search out an individual supposed knowledge of the mystery of God. Rather, it takes us by the hand, together, as an assembly, to lead us deep within the mystery that the word and the sacramental signs reveal to us."

"Consistent with all action of God," he said, the liturgy leads people into the mystery using symbolic actions and signs.

Francis acknowledged that some people claim that in reforming the liturgy and allowing celebrations of the Mass in the language of the local congregation it has somehow lost what is "meant by the vague expression 'sense of mystery.'"

But the mystery celebrated and communicated, he said, is not about "a mysterious rite. It is, on the contrary, marveling at the fact that the salvific plan of God has been revealed in the paschal deed of Jesus." 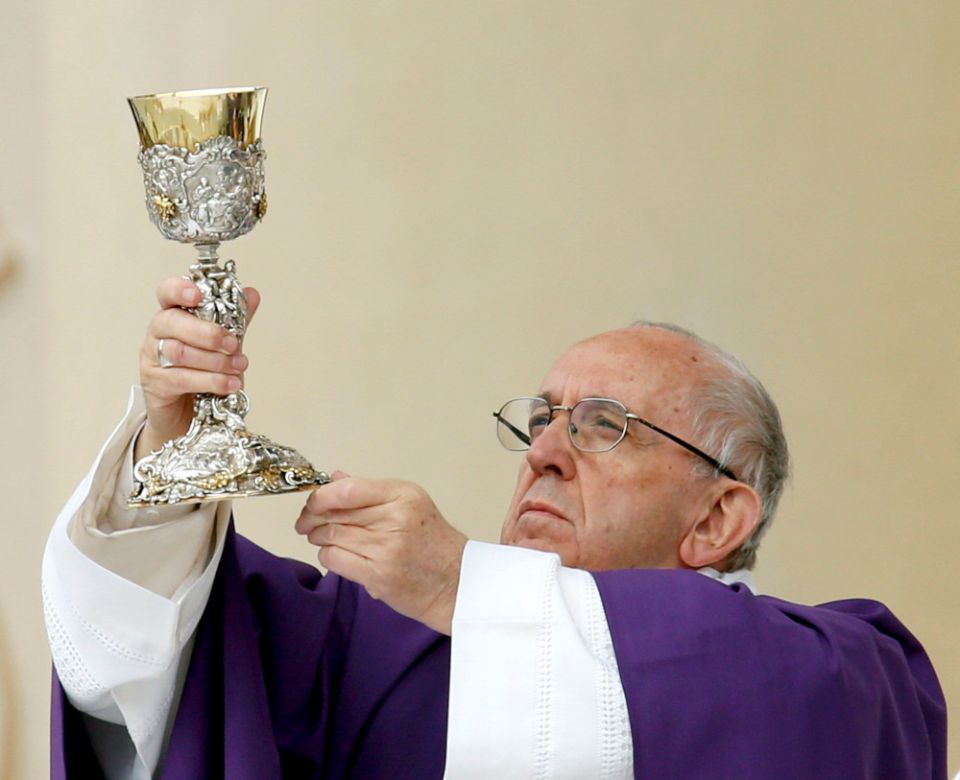 Pope Francis elevates the chalice as he celebrates Mass in Carpi, Italy, April 2, 2017. On June 29, 2022, the pope issued issued an apostolic letter insisting Catholics need to better understand the liturgical reform of the Second Vatican Council and its goal on promoting the "full, conscious, active and fruitful celebration" of the Mass. (CNS/Reuters/Alessandro Garofalo)

The liturgy uses "things that are the exact opposite of spiritual abstractions: bread, wine, oil, water, fragrances, fire, ashes, rock, fabrics, colors, body, words, sounds, silences, gestures, space, movement, action, order, time, light," he said. Those concrete things proclaim that "the whole of creation is a manifestation of the love of God, and from when that same love was manifested in its fullness in the cross of Jesus, all of creation was drawn toward it."

However, Francis wrote, the words and gestures and symbols to be used are only those approved by the church.

"Let us be clear here: every aspect of the celebration must be carefully tended to — space, time, gestures, words, objects, vestments, song, music — and every rubric must be observed," he wrote. Otherwise, the celebrant or ministers risk "robbing from the assembly what is owed to it; namely, the paschal mystery celebrated according to the ritual that the church sets down."

Francis said "the non-acceptance of the liturgical reform" of Vatican II, as well as "a superficial understanding of it, distracts us from the obligation of finding responses to the question that I come back to repeating: How can we grow in our capacity to live in full the liturgical action? How do we continue to let ourselves be amazed at what happens in the celebration under our very eyes?"

"We are in need of a serious and dynamic liturgical formation," he said.

If the church isn't about Jesus, it isn’t about anything

Remembering the days before Vatican II

Four cardinals do not make a schism