Closing synod, Francis warns against righteous who leave God 'out in the cold' 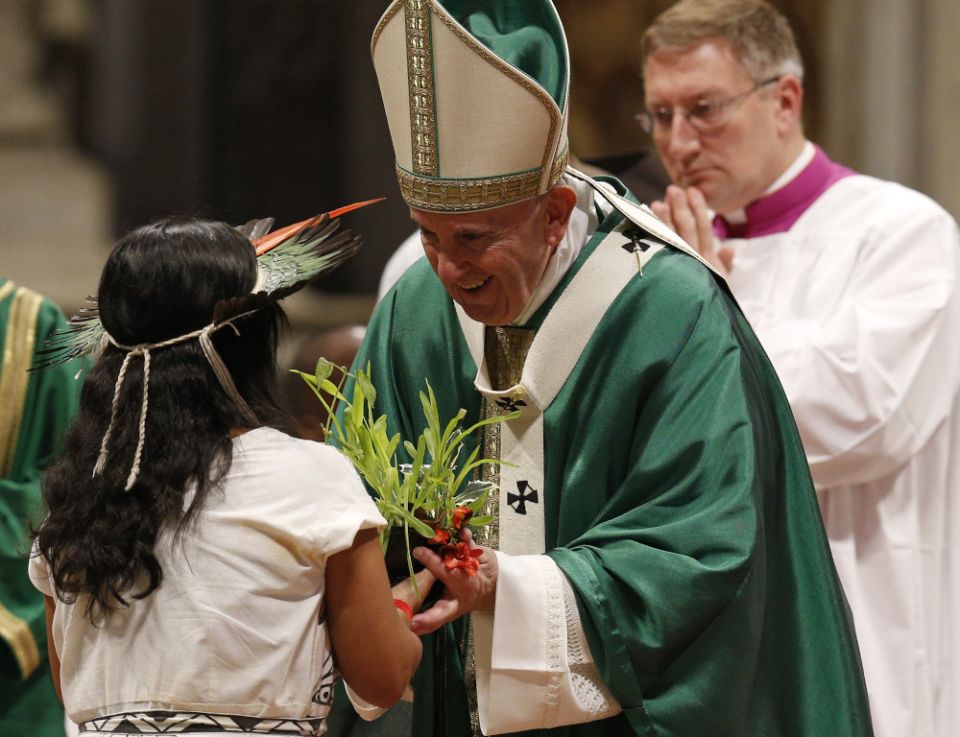 Pope Francis accepts a plant during the offertory as he celebrates the concluding Mass of the Synod of Bishops for the Amazon at the Vatican Oct. 27. (CNS photo/Paul Haring)

Vatican City — Concluding a monthlong gathering of Catholic bishops from the Amazon that drew an unprecedented level of criticism from conservative quarters in the church, Pope Francis warned Oct. 27 against Christians who think they are so righteous they wind up worshipping themselves.

In a homily during a Mass closing the Oct. 6-27 Synod of Bishops for the nine-nation Amazon region, the pontiff said "the root of every spiritual error … is believing ourselves to be righteous."

"We, all of us, are in need of salvation," said Francis. "To consider ourselves righteous is to leave God, the only righteous one, out in the cold."

Some prominent conservative Catholics had become increasing vocal in criticism of the Amazon synod during the three weeks of the gathering, expressing concern about both its consideration of ways the church might better minister in the region and its inclusion of indigenous symbols in worship.

Two conservative activists even filmed themselves stealing indigenous statues from a church near the Vatican and tossing them into Rome's Tiber River. Francis later apologized for the act of vandalism, telling the synod prelates that as the bishop of Rome he wished to ask forgiveness.

The pope reflected in his Oct. 27 homily on a passage from Luke's Gospel, where Jesus offers a parable comparing the prayers of a Pharisee and a tax collector. The Pharisee, a Jewish religious leader, thanks God that he is "not like the rest of humanity." The tax collector, a wealthy man, asks God to be merciful "to me, a sinner."

The Pharisee, the pontiff said, "is focused only on himself."

"He ends up praising himself instead of praying," said the pope. "He stands in the temple of God, but the one he worships is himself."

"Worship of self carries on hypocritically with its rites and 'prayers,' forgetting the true worship of God which is always expressed in love of one's neighbor," said Francis. "Even Christians who pray and go to Mass on Sunday are subject to this religion of the self."

The Amazon synod closed its official business Oct. 26. In their final document, the 185 male voting members taking part called on Francis to allow for the priestly ordination of married men on a regional basis in order to address a lack of ministers across the Amazon region.

The bishops also put forth a series of proposals to address both the rainforest and its people, including defining ecological sin and calling for the church across the Amazon to divest its finances from extractive industries that harm the planet.

In his Oct. 27 homily, Francis lamented the "plundering" of the rainforest, saying it was "inflicting wounds on our brothers and sisters and on our sister earth."

"In this synod we have had the grace of listening to the voices of the poor and reflecting on the precariousness of their lives, threatened by predatory models of development," said the pontiff.

"Many have testified to us that it is possible to look at reality in a different way, accepting it with open arms as a gift, treating the created world not as a resource to be exploited but as a home to be preserved," he said.

The Oct. 27 Mass in St. Peter's Basilica was marked by the inclusion of Amazonian indigenous. One woman, wearing face-paint and a feathered headdress, led the procession opening the celebration. Several indigenous brought forward the gifts, which included a plant that was placed on the altar.

The plant, which filled a small pot, had been grown during the three weeks of the synod from seeds of corn brought from Brazil, the person who brought the seeds explained in a brief interview.

Francis used a new pastoral staff, which the Vatican said was a gift to him from the synod. Made in dark wood with a simple Latin cross at the top, the staff also included the inscription "IHS" and what appeared as indigenous depictions of the four Gospel writers.

At the opening of the celebration, the congregation was led in the singing of a choral version of St. Francis of Assisi's Canticle of the Creatures.

Vatican | Closing synod, Francis warns against righteous who leave God 'out in the cold'

Visitation of Vatican liturgy office could lead to liturgical reform

To understand Pope Francis, look to the Jesuits

Benedict XVI on John Paul II: I always knew he was a saint