Debate over women's ordination as priests mounts in Germany

BONN, Germany — The debate about the ordination of women to the priesthood in the Catholic Church is intensifying in Germany. At an award ceremony hosted by the German bishops' conference, the head of the German international broadcaster Deutsche Welle called for women to have access to ordained ministries in the church.

"I am deeply convinced: an organisation that is not diverse will fail nowadays," Peter Limbourg said in Solingen on Sept. 28. 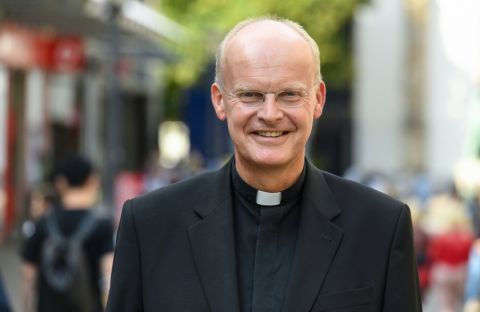 The new chairman of the bishops' commission for faith, Bishop Franz-Josef Overbeck, also supported the ordination of Catholic women priests. "For people with the deep conviction of the equality of all human beings, the current approach to church ministries and access to them is factually no longer comprehensible," Overbeck told the Rheinische Post newspaper on Sept. 28.

He added that there weren't many people who still believed the current practice was right. "The vast majority no longer agrees that the ordained ministry should be reserved exclusively for men," said the bishop.

Limbourg, who expressly mentioned his affiliation with the Catholic Church, also said the church was coming under pressure worldwide. Even in the southern hemisphere, church services were poorly attended, and "dubious evangelical movements and sects" were on the rise there, he said. This was a depressing phenomenon "because the message of Jesus Christ is more relevant than ever in a world full of social injustice, poverty and isolation."

Limbourg was hosting a ceremony for Brazilian dancer Lia Rodrigues, who received the Art and Culture Prize of the Catholic Church in Germany. The journalist praised her artistic work as well as her socio-political commitment. "Lia Rodrigues moves in a tradition that is also a tradition of Christianity: non-violent resistance to oppression, discrimination and exclusion," he said.

Overbeck, who leads the Diocese of Essen, is co-chair of the forum on power and power-sharing in the Synodal Path reform project of the Catholic Church in Germany. The second Synodal Assembly begins in Frankfurt on Sept. 30.

Overbeck called for a greater say for laypeople in matters such as the election of a new bishop. He said his forum wanted to encourage the participation of all who belonged to the people of God. He added: "We will have to give very different answers to similar questions in the Universal Church in the future, if only because the context is different."

Overbeck said the Synodal Path can lead to disappointment, for example if democratic standards that people in Germany were accustomed to could not be introduced in the church. However, those who are aware of belonging to a 2,000-year-old community of faithful would "rejoice" with wisdom and serenity at every step forward, he said.

The Synodal Path launched in 2019 in Germany is a project by bishops and lay representatives to discuss the future of the Catholic Church in the country. The starting point is a church crisis that has lasted for years and was exacerbated by the abuse scandal. The debate is primarily about power, priesthood and sexual morality, as well as the role of women in the church.

Vatican | Debate over women's ordination as priests mounts in Germany

Pope sets date for canonization of Blessed de Foucauld, others

Pope orders German Catholics to make the 'for many' change