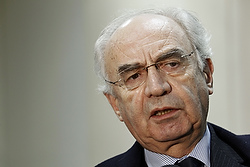 VATICAN CITY -- In an unprecedented move, the board of the Vatican Bank on Thursday forced its president, Ettore Gotti Tedeschi, to resign.

According to a Vatican statement, the bank's supervisory council unanimously passed a no-confidence motion in Gotti Tedeschi for his "failure to fulfill various primary functions of his office." Carl A. Anderson, the supreme knight of the U.S.-based Knights of Columbus, is one of the council's four members.

The Vatican's chief spokesman, Jesuit Fr. Federico Lombardi, declined to give more details on the reasons for the dismissal, but analysts say the move should be read in the context of an internal Vatican struggle over controversial new rules for financial transparency.

Since 2010, Gotti Tedeschi, together with the bank's director general, Paolo Cipriani, has been under investigation for alleged money laundering.

In the past, the Vatican Bank, which operates under the protection of the Vatican's status as a sovereign nation, has been often accused of involvement in shady financial operations, such as money laundering for Italian politicians and even mafia bosses.

According to Giuseppe Di Taranto, professor of finance with LUISS University in Rome, in recent years "Pope Benedict XVI has spearheaded an effort to bring more transparency to the Vatican," seeking its entry into an international list of financially transparent countries.

A key step in this direction was the creation of an independent financial watchdog in December 2010. But according to internal Vatican documents leaked in recent months to the Italian press, the watchdog panel's effective powers have been at the center of a heated Vatican power struggle.

A senior Vatican source quoted by the Italian news agency ANSA said this so-called "Vatileaks" scandal was one of the reasons that led to Gotti Tedeschi's ousting.

In a statement, the Vatican Bank -- officially known as the Institute for Works of Religion -- said it hoped to find a new president who would "rebuild relationships between the Institute and the financial community, based on mutual respect of internationally accepted banking standards."

A cardinal's commission overseeing the bank's activities, headed by the Vatican Secretary of State Cardinal Tarcisio Bertone, will meet tomorrow to discuss the bank's "future steps."

An outspoken economist, Gotti Tedeschi had been at the helm of the Vatican Bank since 2009. His provocative analyses of the global economic crisis often appeared in the pages of L'Osservatore Romano, the Vatican's semiofficial newspaper.

According to Di Taranto, even if the precise reasons for Gotti Tedeschi's dismissal remain unclear, to comply with European standards "there is a need for a further modernization and restructuring" of the Vatican Bank. "After all, the Vatican is a very rich country."

Cardinal Marx says loyalty to the pope is important for Catholicism

Vatican media need to 'up their game,' adviser says