Forced retirement is message to all bishops, Morris says 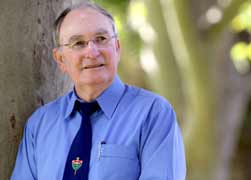 Australian Bishop William Morris, who was forced to retire in part because of a pastoral letter he issued mentioning the possibility of ordaining women as one of several solutions to the growing priest shortage, said he would like to make public a copy of a written report on his diocese.

Morris, in answer to questions from NCR, also said he thinks his forced retirement is intended to "send a message to the bishops of the world: the fact that if you ask questions, if you're in people's faces long enough, if you're kind of a nuisance around the place, well look what happened to Bill Morris."

Morris made the comments on the Australian Broadcasting Corporation show "Sunday Nights with John Cleary" May 8. This writer was a participant in the discussion with Cleary, Morris and church historian Paul Collins, and asked Morris if he would make the report public if he had a copy of it and whether he thought he was meant to be an example to others.

Links to the ABC broadcast are found below.

Of the report, done by Denver Archbishop Charles Chaput, Morris said: "Yes, I would like it published because I think my people deserve the right to – you know, if Archbishop Chaput, who wandered around the diocese for three-and-a-half days … and then made a judgment on the diocese, I think the people have a right to see what judgments he made in his report."

Morris said he knows a written report exists because Chaput sent him an e-mail "telling me that he'd sent an electronic copy as well as a hard copy to the dicastery for bishops, and then he did what he was supposed to do. He destroyed both the electronic copy and the hard copy, so he didn't have a copy any more." To date, Morris has not seen what was written about him or the diocese, and the Vatican apparently does not intend to reveal the contents of the report.

Chaput, asked by NCR earlier about the report and whether it would be made public would only respond that "any apostolic visitation is governed by strict confidentiality. This is for the benefit of all parties involved."

In answer to a question from Cleary, Morris read from the letter Pope Benedict sent to him. He said the pope appeared to be raising the stakes on discussion of ordaining women with the claim in the letter that Pope John Paul II "has decided, infallibly and irrevocably, that the church has not the right to ordain women to the priesthood."

"I'd say it's part of what a lot of people are calling creeping infallibility. … Now in my knowledge, I had never seen that written before, using the word infallible concerning JPII's statement, because he never used the word infallible," Morris said. "If my memory serves me, without looking at the document. I think he said the he didn't see himself having any power or the right to ordain women, something like that language. But he [John Paul II] never used the word infallible."
[Tom Roberts is NCR editor at large. His e-mail address is troberts@ncronline.org.]

Vatican | Forced retirement is message to all bishops, Morris says

Reforming the Vatican Curia: Never easy, and never over