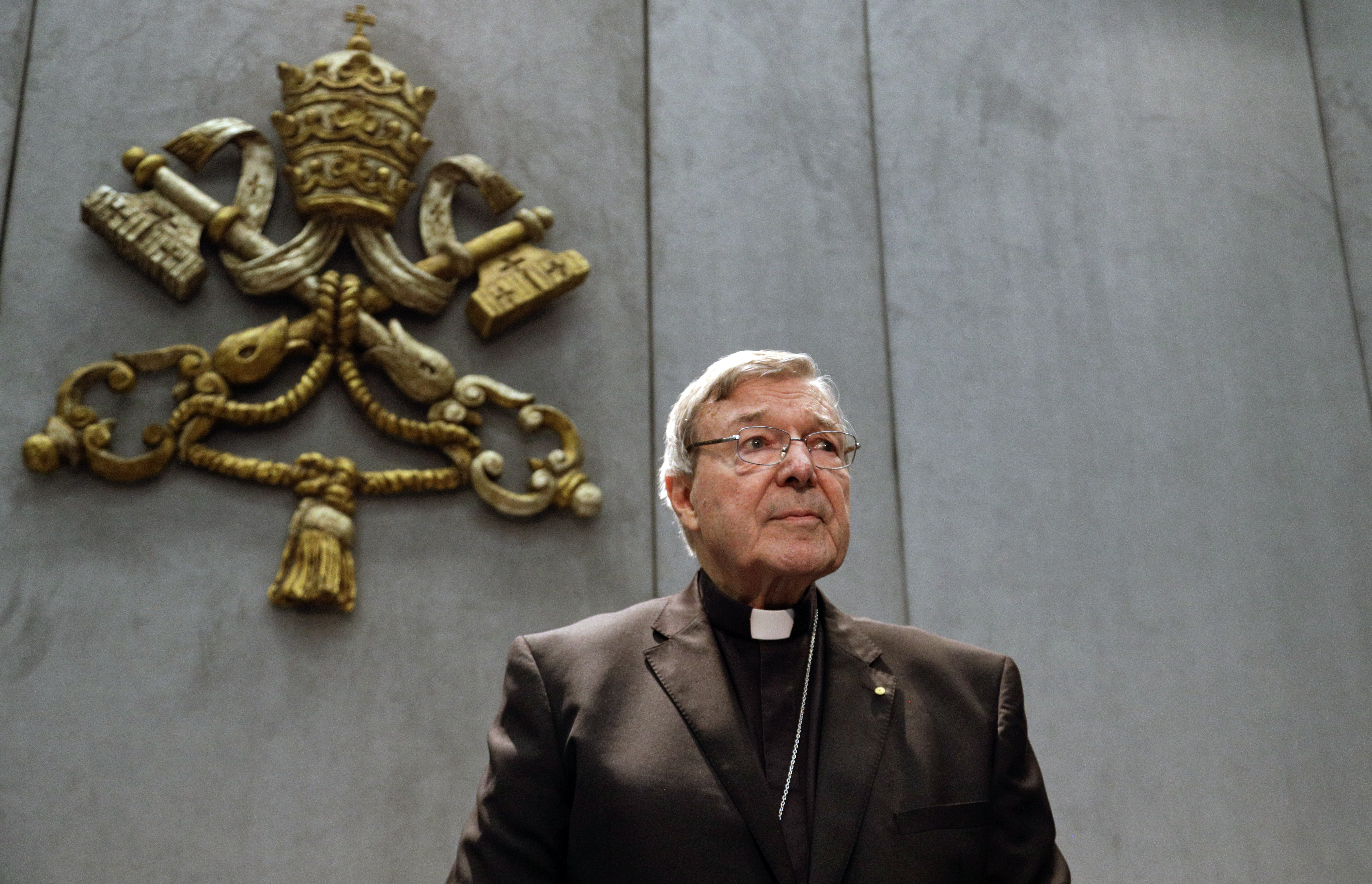 In this June 29, 2017, file photo, Cardinal George Pell prepares to make a statement, at the Vatican. (AP Photo/Gregorio Borgia, File)

Former Vatican economy czar Cardinal George Pell warns in a new book that the Catholic institution is facing a growing deficit, but he hopes financial reform efforts have put a stop to money laundering in the small city-state.

Pell's newest book, “ Prison Journal, Volume 3: The High Court frees an Innocent Man,” was published in November and is the final installment detailing his experiences in prison. Pell was jailed for more than a year in 2019 after being accused of sexually abusing minors in Victoria, Australia, and was acquitted on appeal by the country’s High Court in April 2020 for lack of evidence.

The book touches on a variety of subjects, from how the cardinal’s faith and support sustained him during imprisonment, to his political views, but it also addresses “corruption in Rome,” Pell told Religion News Service during a phone interview on Wednesday (Nov. 17).

“I think the main challenge is the Vatican is short of money. That’s the primary reality at the moment,” Pell said, adding that the red balance sheet is due to “years of old-fashioned methodology, incompetence and corruption.”

Pell also pushed back against criticism from Cardinal Angelo Becciu — often portrayed as his rival during his efforts to reform the Vatican’s finances — and questioned Becciu's transfer of funds from the Vatican to Australia, which some speculate had an influence on Pell’s trial and imprisonment in 2019.

Pope Francis appointed Pell as prefect for the Vatican’s Secretariat for the Economy in 2014, to spearhead the pope’s ambitious plans to reform the Catholic institution’s troubled finances. His time at the Vatican was cut short once he was summoned to court in Australia, but he said he keeps a keen eye on the recent developments in the church’s finances.

Financial scandals involving millions of dollars have depleted the Vatican’s coffers for decades. The COVID-19 pandemic, which imposed travel bans in Italy and globally, was a huge blow to an institution that relies heavily on the millions of tourists who visit the Vatican museums every year. According to the 2021 Vatican budget, the institution is bracing for a $60 million deficit.

While Vatican City does not have any debts, the cardinal said, “We’re overspending every year for the last 10 years at least.” The Vatican’s finances have been depleted by faulty investments, such as a $200 million investment in prime real estate in London that ended up costing the institution almost double in dubious fees and commissions.

The property is currently in the process of being sold for a $100 million loss. This controversial investment, made between 2014 and 2019 by the Vatican’s Secretariat of State using funds destined for the pope’s charitable works, is at the heart of a Vatican mega trial of 10 clergy members and employees — including Becciu — accused of corruption, money laundering and abuse of office.

Pell looks back at his time as Vatican finance czar as “frustrating” but believes the trial “is evidence of some progress.”

While not wishing to comment on the ongoing trial at the Vatican, the cardinal believes the London investment dealt yet another blow to the already bruised Vatican finances.

“Old habits die hard,” Pell wrote in his book, referring to the financial scandals that maimed the Vatican’s reputation in the 1980s and 2000s. He expressed dismay that “rogue elements in control of some sections of the Vatican have continued to deal with notorious financial agents, who have stripped them of more than €100 million (at least) during the last ten years.”

Pell said, “It’s very important for the reputation of the church that these court proceedings are conducted properly and justly.” Defense lawyers in the proceedings have complained about a lack of due process at the trial and of missing evidence.

“We’ve got to be people who show we respect the law and that we follow the law,” he said.

In the book, Pell alluded to news reports suggesting that funds were sent from the Secretariat of State to Australia to influence Pell’s criminal prosecution. Since 2014, roughly $7.3 million were transferred from the Vatican to Australia, but a Vatican statement claimed the sum was used to pay contracts and manage embassy fees.

In the foreword to the book, Catholic author and commentator George Weigel demands that, “if there are links between financial corruption in Rome and the prosecution of George Pell, they should be identified.”

Becciu, who was the substitute at the Vatican Secretariat of the Economy during the London investment, a role equivalent to chief of staff, has pushed back against these allegations in a statement issued through his lawyers. “The issue was denied by the competent authorities,” the statement read, voicing regret that Pell “continues to support such suspicions” and promoting “innuendos and imaginative conspiracies.”

The statement also underlined the independence of the Secretariat of State from outside interference. Pope Francis has stripped Becciu of his cardinal rights and positions at the Vatican and moved the management of the secretariat’s funds to the offices of the Administration of the Patrimony of the Apostolic See, or APSA.

“A bit of the money did go from the Vatican to Australia,” Pell said, a transaction that local authorities characterized as “rather dubious.”

“I would invite the cardinal to tell us why the money was sent, what the purposes were,” he added.

Despite the scandals and financial deficit, Pell remains optimistic about the future of Vatican reform. “I believe we’ve stopped the money laundering and I hope that the facts bear me out,” he said. The cardinal urged the institution to continue its plan for reform and re-introduce external auditors. He also warned against selling church assets to cover the financial deficit.

“The main challenge in confronting the Vatican financial services now is just to pay the bills and balance the budget. Most of the corruption has been dealt with, I believe,” he said.