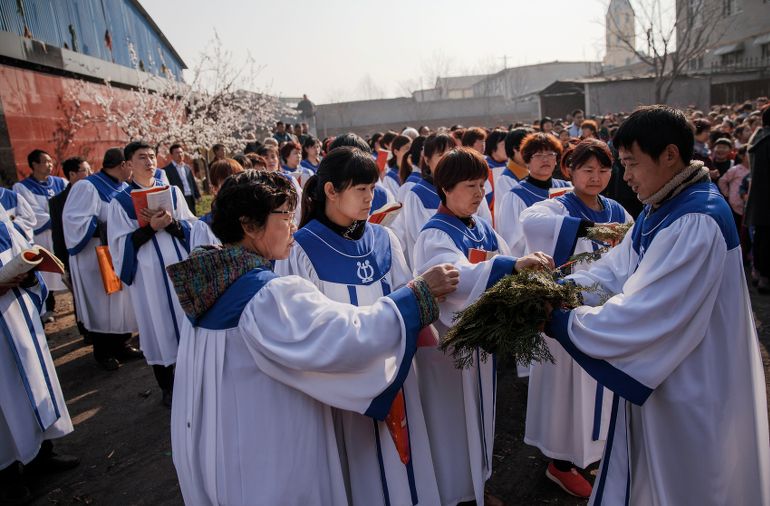 Rome — Pope Francis is asking the members of China's Catholic Church to have faith in the Vatican's judgment in signing an agreement with their government, telling them in a Sept. 26 letter to "place your trust ever more firmly ... in the Church's discernment."

The pontiff is also requesting that Catholics in both the underground Chinese church and the state-sponsored "patriotic association" now work to reconcile with one another, saying it is time to "initiate an unprecedented process that we hope will help to heal the wounds of the past."

In a six-page letter addressed to "the Catholics of China and to the Universal Church," Francis acknowledges that reports about the Sept. 22 provisional agreement over the appointment of bishops in the world's most populous country have caused "a certain confusion."

"Some feel doubt and perplexity, while others sense themselves somehow abandoned by the Holy See," the pope says.

"I ... am convinced that encounter can be authentic and fruitful only if it occurs through the practice of dialogue, which involves coming to know one another, to respect one another and to 'walk together,'" he continues.

"This is the context in which to view the Provisional Agreement, which is the result of a lengthy and complex institutional dialogue between the Holy See and the Chinese authorities, initiated by Saint John Paul II and continued by Pope Benedict XVI," says Francis.

"As the Successor of Peter, I want ... to ask you to place your trust ever more firmly in the Lord of history and in the Church’s discernment of his will," he states.

The Vatican and Chinese authorities had been in disagreement for seven decades over the process of appointment of Catholic bishops. While China wanted to name the leaders of Catholic dioceses, the Vatican asserted that such authority rests only with the pope.

The situation led to a split in the Catholic community in the country, with the "patriotic association" accepting the government's appointments and an underground church risking persecution to remain loyal to Rome.

Although the specifics of the new deal have not been released, it is understood that the government will now recommend names for possible new bishops to the Vatican. In a Sept. 25 press conference, Francis said the process would involve a dialogue but that he would make the final decisions about who becomes a bishop.

In his Sept. 26 letter, the pope says it was "essential" to deal with the issue of bishops' appointments "for the sake of supporting and promoting the preaching of the Gospel in China and reestablishing full and visible unity in the Church."

"Regrettably, as we know, the recent history of the Catholic Church in China has been marked by deep and painful tensions, hurts and divisions, centered especially on the figure of the bishop as the guardian of the authenticity of the faith and as guarantor of ecclesial communion," Francis continues.

"When, in the past, it was presumed to determine the internal life of the Catholic communities, imposing direct control above and beyond the legitimate competence of the state, the phenomenon of clandestinity arose in the Church in China," he states.

"This experience -- it must be emphasized -- is not a normal part of the life of the Church," he says.

Shortly after the Vatican's announcement of the deal with Beijing Sept. 22, the city-state also announced that that Francis had readmitted to "full ecclesial communion" seven living Chinese bishops who were ordained without Vatican approval, and had thus incurred automatic, or latae sententiae, excommunications.

The pope says he decided to lift the excommunications "after carefully examining every individual personal situation," and asks the seven prelates to now "express with concrete and visible gestures their restored unity with the Apostolic See."

Francis says "an important part" of the success of the Vatican-Beijing deal now rests with all Chinese Catholics, and asks that they "join in seeking good candidates capable of taking up in the Church the demanding and important ministry of bishop."

In a section of the letter addressed to bishops, priests, and consecrated religious, the pontiff asks that they "recognize one another as followers of Christ in the service of God’s people."

"Let us leave behind past conflicts and attempts to pursue our own interests, and care for the faithful, making our own their joys and their sufferings," he says. "Let us work humbly for reconciliation and unity."

In a section of the letter addressed to young people, Francis tells them to "be ready to accept the sure guidance of the Holy Spirit, who shows today’s world the path to reconciliation and peace."

"Let yourselves be surprised by the renewing power of grace, even when it may seem that the Lord is asking more of you than you think you can give," he says. "Do not be afraid to listen to his voice as he calls you to fraternity, encounter, capacity for dialogue and forgiveness."

Francis asks China's political leaders to develop "a new style of straightforward daily cooperation" with Catholic officials "in order to ensure that pastoral activities take place in an orderly manner."

The pontiff ends his letter with a prayer to Mary, entrusting to her "the journey of the faithful in the noble land of China."

This breaking news story is being updated.

No easy solutions: a response to Weigel's critique of the Vatican-China deal