Vatican announces deal with China over appointment of Catholic bishops 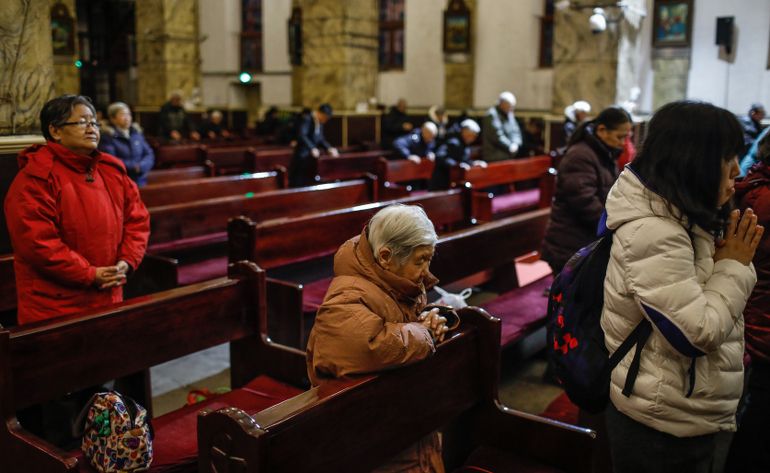 Chinese Catholics pray in late January in the Cathedral of the Immaculate Conception in Beijing. (CNS photo/Roman Pilipey, EPA)

The Vatican has announced the signing of a "provisional agreement" with Chinese authorities to address a seven-decade dispute over the appointment of Catholic bishops in the world's most populous country.

A four-paragraph Sept. 22 statement announcing the deal was light on details, but it may represent a diplomatic achievement of historic proportions for Pope Francis' five-year papacy.

Pointing to the significance of the move, Vatican Secretary of State Cardinal Pietro Parolin said simply: "Today, for the first time after decades, all the bishops in China are in communion with the Bishop of Rome."

Almost since the establishment of the Communist People's Republic of China in 1949, Catholics in the country have been split into two groups: an underground organization that recognizes the pope and his authority over naming bishops, and a state-supported "Patriotic Catholic Association" that names its own bishops.

Francis has made resolving the question of episcopal appointments in China one of his diplomatic priorities, and the possibility of success on the matter had been widely reported in recent days.

According to reports, the announced deal foresees that new bishops for Chinese dioceses will be proposed to the Vatican by the Chinese government, after it seeks input from the Chinese bishops' conference and Catholics of the areas concerned.

The pope will then make the final decision on whom to appoint as bishop, say the reports, effectively giving the pope veto power on the matter.

The Catholic Church teaches that only the pope can name bishops; the Code of Canon Law says it is the pontiff who "freely appoints bishops or confirms those legitimately elected."

In previous centuries it was a common practice for local authorities to be involved in selection of bishops, and some European princes and kings were granted veto power over the pope's selection.

The Vatican announced the agreement with China mid-day Sept. 22, just after Francis had landed in Lithuania for the start of a four-day visit to the three Baltic States.

About 90 minutes after announcement of the agreement, the Vatican also announced that that Francis had readmitted to "full ecclesial communion" seven living Chinese bishops who were ordained without Vatican approval, and had thus incurred automatic, or latae sententiae, excommunications.

The short text describing the deal between the Vatican and China says it "concerns the nomination of Bishops, a question of great importance for the life of the Church, and creates the conditions for greater collaboration at the bilateral level."

Greg Burke, the director of the Holy See Press Office, called the agreement part of a process of dialogue between the two entities that involved "patient listening on both sides even when people come from very different standpoints."

Some Chinese Catholics had criticized reported details about the pending agreement, saying they represented a capitulation to Chinese demands.

Retired Hong Kong Cardinal Joseph Zen has been particularly vocal, saying in a Reuters interview Sept. 21 that the Vatican was "giving the flock into the mouths of the wolves."

There are an estimated 12 million Catholics in China, a country of some 1.4 billion people. The church traces its roots there to 13th century European missionaries, with a permanent mission first being established in the 17th century after the efforts of those such as Jesuit Fr. Matteo Ricci.

The announcement of the deal with China did not mention the Vatican's relationship with Taiwan. The city-state is one of fewer than 20 countries to have a full diplomatic relationship with the island's government.

Pope's quotes: No one is excluded