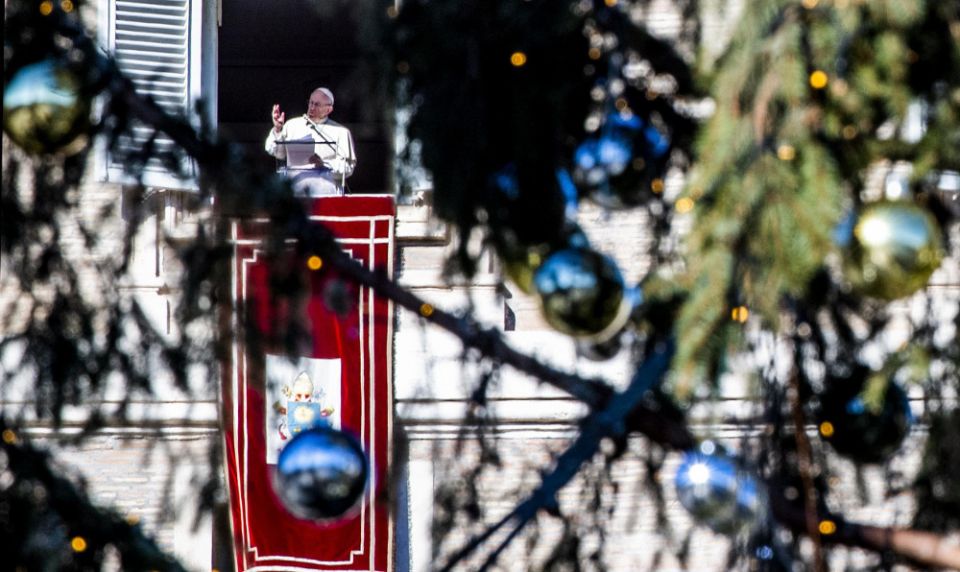 Pope Francis leads the Angelus from the window of his studio overlooking St. Peter's Square at the Vatican Dec. 26. (CNS/Claudio Peri, EPA)

Vatican City — Families are "a treasure," Pope Francis said. "They must be safeguarded always, defended."

Celebrating the feast of the Holy Family Dec. 30, the pope led a round of applause for all the families that were among an estimated 50,000 people gathered in St. Peter's Square for the noon recitation of the Angelus prayer and to see the Vatican's sand Nativity scene.

Before leading the prayer, Pope Francis talked about the day's Gospel reading from St. Luke, which recounted how, as part of a caravan, Mary and Joseph took 12-year-old Jesus to the temple in Jerusalem; on the way home, they noticed Jesus was not with the group. Turning back, they found him in the temple, listening to the teachers and asking them questions.

Mary and Joseph, the pope said, experienced "anguish" when they could not find their son and "astonishment" when they found him dialoguing with the teachers in the temple.

Awe, marvel and astonishment were never lacking in the Holy Family, the pope said. "To be astonished and to marvel are the opposite of taking something for granted (and) the opposite of interpreting the reality around us and the events of history only according to our own criteria."

"To be astonished is to open oneself to others, to understand their motives," he said. "This attitude is important for repairing compromised relationships between people and is indispensable for healing open wounds within the family."

"When there are problems in the family, we assume we are right and shut the door on others," he said. But, instead, "we should think, 'What is good about this person?' and marvel at that goodness. This will help family unity."

Pope Francis said he also wanted to talk about the anguish Mary and Joseph felt when they discovered Jesus was not with them.

"The family of Nazareth was holy because it was centered on Jesus. All of Mary and Joseph's attention and concern were about him," the pope said.

The anguish Mary and Joseph felt when they were away from Jesus should be what all Christians feel when they are far from him, or when they forget to pray, he said.

And just as Mary and Joseph found Jesus teaching in the temple, the pope said, Christians always can find Jesus in the church, especially in the sacrament of the Eucharist.

Pope Francis led the crowd in the square praying "for all the world's families, especially those who, for various reasons, lack peace and harmony."

And he wished everyone a "serene end of the year. End the year with serenity."

Vatican | Defuse family fights by remembering the good in the other, pope says