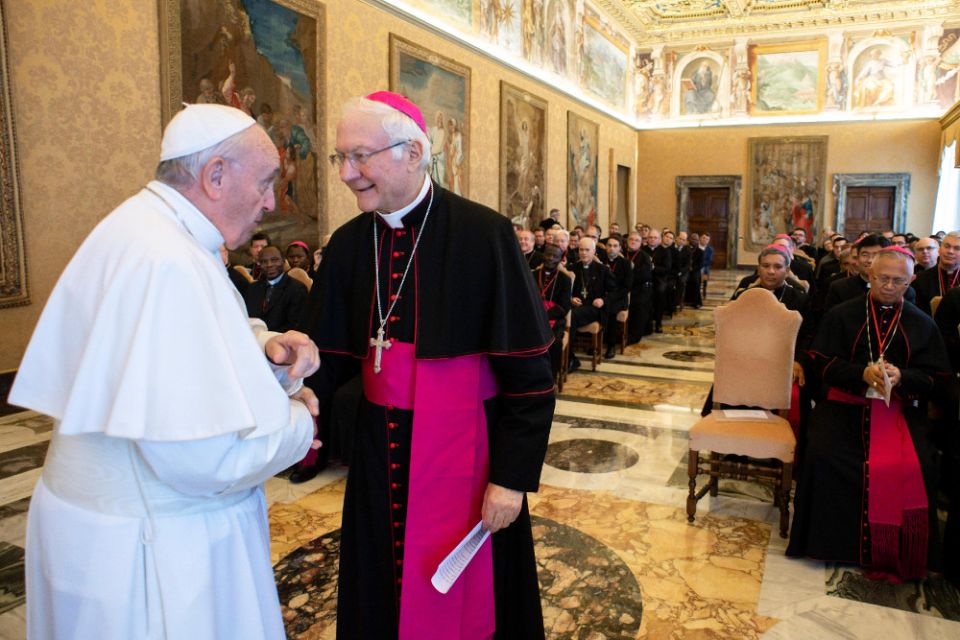 Pope Francis greets Archbishop Piero Marino, president of the Pontifical Committee for International Eucharistic Congresses, during an audience with members of the committee at the Vatican Nov. 10. (CNS/Vatican Media)

Vatican City — Even in societies increasingly marked by divisions and prejudice, Catholics gather every Sunday "in the Lord's name and acknowledge that they are brothers and sisters," Pope Francis said.

The communion with Jesus and with others that happens at each celebration of the Eucharist must extend beyond the walls of the church and transform societies with the good news of salvation in Jesus and greater harmony among people, the pope said Nov. 10 at a meeting with members of the Pontifical Committee for International Eucharistic Congresses.

The committee is preparing the next International Eucharistic Congress to be held in Budapest, Hungary, in 2020.

Pope Francis said the choice of the Central European city "raises a fundamental question: What does it mean to celebrate a eucharistic congress in the modern and multicultural city where the Gospel and the forms of religious affiliation have become marginal?"

The response, he said, must be to find ways to foster a "eucharistic culture" that is "grounded in the sacrament yet perceptible also beyond the limits of the church community."

At every Mass, he said: "The miracle is repeated: In the hearing of the word and in the sign of the broken bread, even the smallest and lowliest assembly of believers becomes the body of the Lord, his tabernacle in the world."

To form a "eucharistic culture," he said, each Catholic must experience communion with Jesus, regularly encountering him in prayer and following him into the world.

Eucharistic adoration, a key feature of eucharistic congresses, contributes to creating that culture by teaching Catholics not to separate "our sacramental communion with him from our communion with his members and from the missionary commitment that follows from this."

Communion with Jesus should then lead to an attitude of service in imitation of him, the pope said. "Christians serve the cause of the Gospel by being present in places of frailty, under the shadow of the cross, in order to share and to bring healing."

Within Catholic communities and in society at large, many situations cry out for the "balm of mercy," the pope said. "We think of families in difficulty, young people and adults without work, the sick and the elderly who are abandoned, migrants experiencing hardship and acts of violence, and so many other forms of poverty."

In all situations of need and suffering, he said, Catholics can "spread the seeds of a eucharistic culture by becoming servants of the poor, not in the name of an ideology but of the Gospel itself, which becomes a rule of life for individuals and communities."

Every celebration of the Eucharist reminds the community of Gospel values and concepts that can help make cities and nations more livable, the pope said.

"We need think only of the word mercy," he said. In societies where there reign "different kinds of fear, oppression, arrogance, cruelty, hatred, forms of rejection and lack of concern for the environment," the celebration of the Eucharist proclaims that God's mercy is stronger than all of them.

The celebration of a eucharistic congress, he said, is a reminder to Catholics that "the Eucharist stands at the very heart of the church's life. It is a paschal mystery that can enhance the baptized as individuals, but also the earthly city in which they live and work."