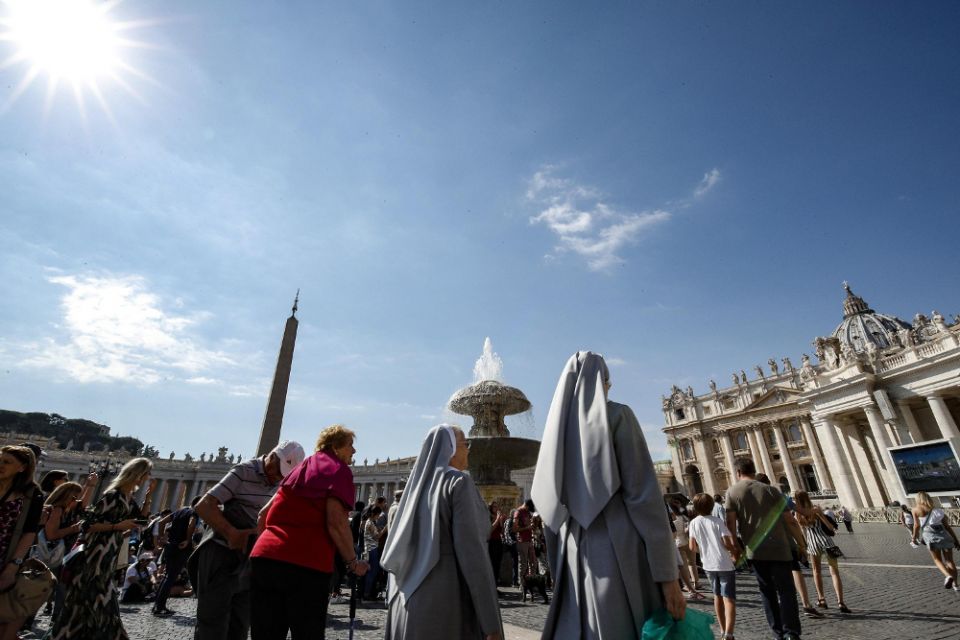 Pilgrims listen as Pope Francis leads the Angelus Sept. 30 from the window of his studio overlooking St. Peter's Square at the Vatican. (CNS/Giuseppe Lami, EPA)

Vatican City — Jesus invites people to stop labeling others as being either "friends" or "enemies" or being "with us" or "against us," Pope Francis said.

People should open their hearts and minds to recognize God's presence and action even in the most unusual and surprising places and in people "who are not part of our circle," the pope said Sept. 30 during his Sunday Angelus address.

"It is about being more attentive to the authenticity of the good, the beautiful, the true that is carried out and not to the name and provenance of the one who does it," he told those gathered in St. Peter's Square.

The pope's remarks were part of his reflections on the day's Gospel reading (Mk 9:38-48) in which the disciples tried to prevent an individual from driving out demons in Jesus' name because "he does not follow us."

Jesus, the pope said, appears "fully open to the freedom of the spirit of God who is not limited in his actions by any boundaries or enclosures."

The Gospel passage shows how the disciples' behavior is very common, reflecting an attempt — done in zealous good faith — "to protect the authenticity of a certain experience, to safeguard the founder or leader from false imitators," the pope said.

But, the pope said, it also could reflect being afraid of any kind of "competition," in which someone else may be taking away potential followers, and so "people cannot appreciate the good that others are doing; it's not good because he isn't, as they say, 'one of us.' "

God's great freedom in the ways he gives himself to humanity is a challenge and an invitation to no longer think along the lines of "'friend/foe,' 'us/them,' 'who's in/who's out,' 'mine/yours,' but to go beyond that" and see how God may be present and at work everywhere.

Instead of judging others, we should be examining ourselves and "cut off' without compromise everything that may scandalize people who are weakest in the faith," he said, referring to the last part of the reading which admonishes the faithful to "cut off" that which causes one to sin because it is better to be maimed and saved than "whole" and doomed to the fires of hell.

Vatican | God works freely through whomever he wants, pope says