God's will is clear: to seek out, save humanity from evil, pope says 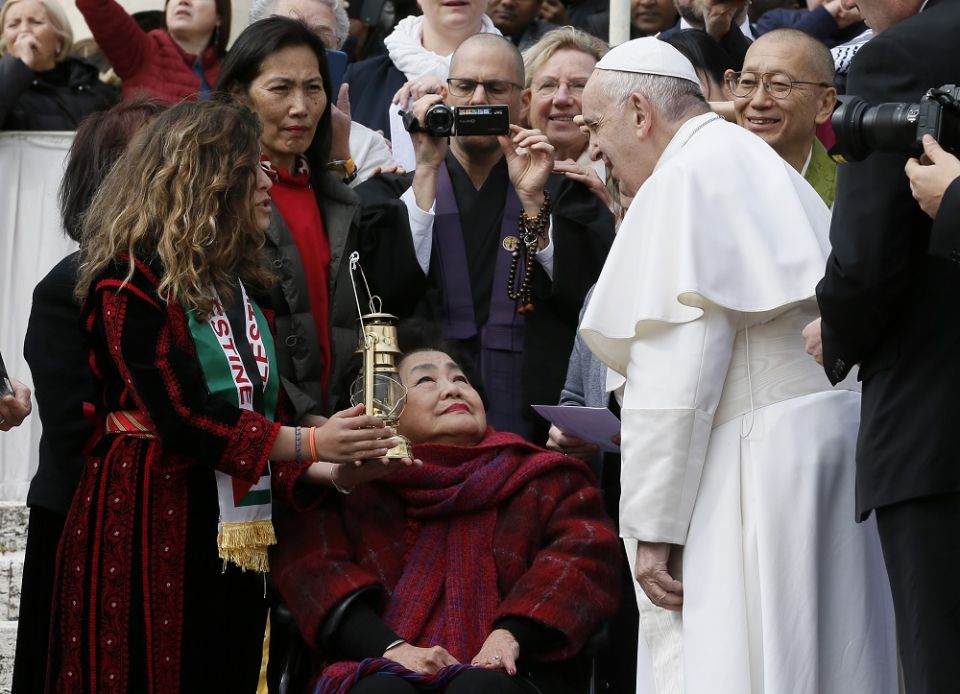 Pope Francis greets Setsuko Thurlow, a survivor of the 1945 atomic bombing in Hiroshima, Japan, and a delegation from the organization Earth Caravan, during his general audience in St. Peter's Square at the Vatican March 20, 2019. The group presented a flame of peace, which the pope blew upon. (CNS/Paul Haring)

Vatican City — Christians have faith in a God who wants to and is able to transform the world, conquering evil with good, Pope Francis said.

That is why "it makes sense to obey and abandon oneself" to God and his will, even during life's most difficult moments, the pope said March 20 during his general audience in St. Peter's Square.
Continuing a series of talks about the Lord's Prayer, the pope focused on the line, "Thy will be done." It is the third petition in the prayer right after, "hallowed be thy name" and "thy kingdom come."
God's will — what he wants — is clearly illustrated throughout the Gospel, the pope said; it is "to seek out and save whoever is lost."
"Have you ever thought about what that means, that God is looking for me, for each one of us" personally, "knocking on the door of our heart" with love, hoping to capture people's attention and take them by the hand toward salvation, the pope said.
"God is not ambiguous," Pope Francis said. "He does not hide behind riddles" or inscrutable plans; he wants everyone to know the truth and be saved.
The Our Father is a prayer asking that this desire be fulfilled and that each person and all of humanity be saved, he said.
When people pray, "Thy will be done," they are praying not as subservient "slaves" but as children who understand and trust their father and his loving plan, the pope said.
"It is a courageous, even confrontational prayer because there are so many, too many things going on in the world that are not according to God's plan," he added.
In a world experiencing war, hatred and exploitation, he said, people of faith know that God wants what is best, which is why they pray his will be done and that swords be turned into plowshares, because "God wants peace."
The Lord's Prayer is meant to ignite the same deep love Jesus felt for his father, the same passion to "transform the world with love."

Christians do not believe in random, unalterable or "inescapable fate," the pope said. Rather, they truly believe "that God can and wants to transform reality, conquering evil with good," and this, he said, is why people pray.
Even though Christ was being "crushed by the evil of the world," he abandoned himself fully and confidently to God's will, the pope said.
That path to salvation may be difficult, and people may experience suffering, pain or harm, but God "will never abandon us. He will always be with us, next to us, within us."
"For a person of faith, this is more than a hope, it is a sure thing — God is with me."
Present at the pope's general audience was Nobel Peace Prize recipient, Setsuko Thurlow, 87, a Japanese-Canadian survivor of the United States' atomic bombing of Hiroshima in 1945. She received the prize in 2017 on behalf of the International Campaign to Abolish Nuclear Weapons.
She was part of a delegation of activists led by Earth Caravan, an interfaith group based in Japan and Canada. The group visiting the Vatican was made up of people from different countries and cultures, including four 13-year-old girls — girls the same age as Thurlow when the bomb dropped on her city and killed her family.
The group was to present Pope Francis with an oil lamp lit with a flame that was taken from the burning ashes of the bomb dropped on Hiroshima. The flame, the group said on its website, has been burning continuously since Aug. 6, 1945.
The group was going to ask the pope to blow out the flame they brought as a symbolic gesture of wishing for a world free of nuclear weapons and a brighter, more peaceful world.

Vatican | God's will is clear: to seek out, save humanity from evil, pope says

As lockdowns end, pope prays for prudence in behavior, judging others