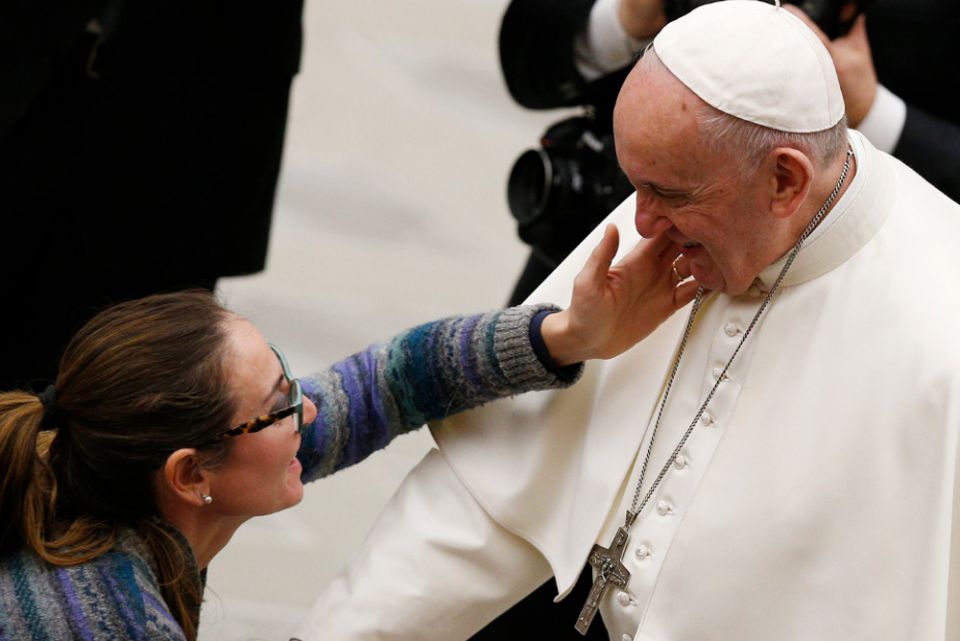 A woman touches Pope Francis' face during his general audience in Paul VI hall at the Vatican Jan. 16. (CNS/Paul Haring)

Vatican City — To pray well, people need to have the heart of a child — a child who feels safe and loved in a father's tender embrace, Pope Francis said.

If people have become estranged from God, feel lonely, abandoned or have realized their mistakes and are paralyzed by guilt, "we can still find the strength to pray" by starting with the word, "Father," pronounced with the tenderness of a child, he said.

No matter what problems or feelings a person is experiencing or the mistakes someone has made, God "will not hide his face. He will not close himself up in silence. Say, 'Father,' and he will answer,' " the pope said Jan. 16 during his weekly general audience.

After greeting the thousands of faithful gathered in the Paul VI audience hall, the pope continued his series of talks on the Lord's Prayer, reflecting on the Aramaic term, "Abba," which Jesus uses to address God, the father.

"It is rare Aramaic expressions do not to get translated into Greek in the New Testament," which shows how special, important and nuanced "Abba" is in reflecting the radical and new relationship God has with his people, the pope said.

St. Paul, he said, wrote to the Romans that they were now "children of God, for you did not receive a spirit of slavery to fall back into fear, but you received a spirit of adoption, through which we cry, 'Abba, Father!' "

Jesus teaches his disciples that "Christians can no longer consider God a tyrant to be feared," but instead feel a sense of trust growing in their hearts in which they can "speak to the creator, calling him 'Father,' " the pope said.

The term "Abba," the pope said, "is something much more intimate and moving that simply calling God, 'father,'" It is an endearing term, somewhat like "dad," "daddy" or "papa."

Even though the Lord's Prayer has been translated using the more formal term, "Father," "we are invited to say, 'papa,' to have a rapport with God like a child with his or her papa."

Whatever term used, it is meant to inspire and foster a feeling of love and warmth, he said, like a child would feel in the full embrace of a tender father.

"To pray well, one must have the heart of a child, not a heart that feels adequate" or self-satisfied, he said.

People must imagine this prayer being recited by the prodigal son after he has been embraced by his father, who waited so long, who forgave him and only wants to say how much he missed his child, Francis said.

"Then we discover how those words take on life, take on strength," he said.

People will then wonder, "'How is it possible that you, God, know only love? That you don't know hate? Where inside of you is revenge, the demand for justice, the fury over your wounded honor?' And God will respond, 'I know only love.' "

The father of the prodigal son also displays the maternal qualities of forgiveness and empathy, the pope said. Mothers especially are the ones who keep loving their children, "even when they would no longer deserve anything."

"God is not just a father, he is like a mother who never stops loving" her child.

At the end of the general audience, in preparation for the Week of Prayer for Christian Unity Jan. 18-25, Francis said, "ecumenism is not something optional."

The purpose of the week of prayer and encounter, he said, is to foster and strengthen a common witness upholding "true justice and supporting the weakest through concrete, appropriate and effective responses."

Lofty titles do not guarantee entrance to heaven, pope says

The words of the Mass do matter