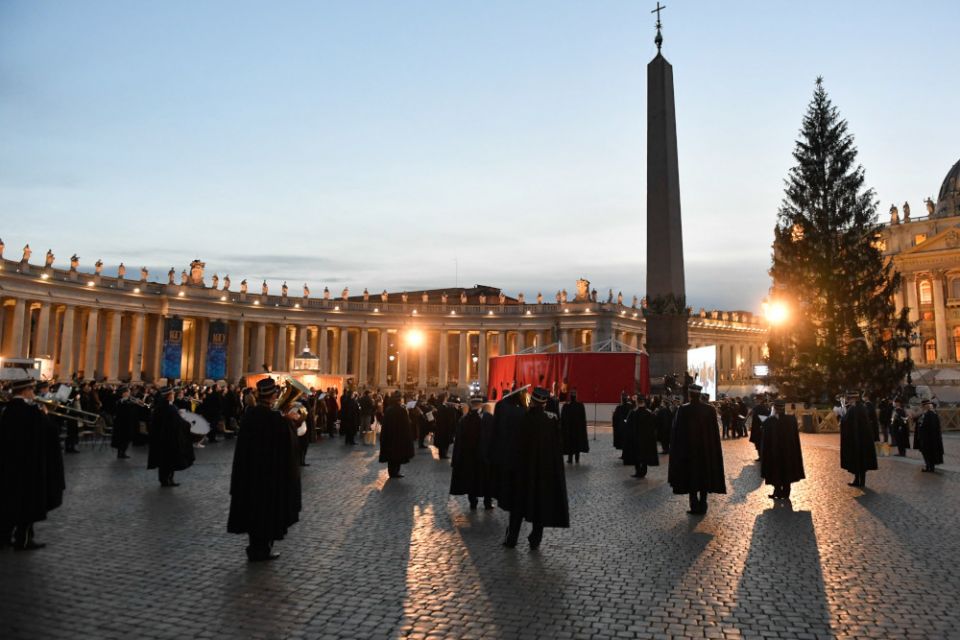 The Vatican band plays during a ceremony to unveil the Nativity scene and light the Christmas tree in St. Peter's Square at the Vatican Dec. 11, 2020. (CNS/Vatican Media)

Vatican City — The image of baby Jesus nestled in the manger is a much-needed reminder during the pandemic that God gives the world the gift of hope in troubled times, Pope Francis said.

Meeting with delegations from Castelli in Italy's Abruzzo region and from Kocevje, Slovenia — responsible, respectively, for the Nativity scene and Christmas tree in St. Peter's Square — the pope said that Christmas "reminds us that Jesus is our peace, our joy, our strength, our comfort."

"But, to receive these gifts of grace, we need to feel small, poor and humble like the characters of the Nativity scene. Even in this Christmas, amid the suffering of the pandemic, Jesus — small and defenseless — is the 'sign' that God gives to the world," he said Dec. 11.

The Nativity scene featured several life-sized ceramic statues in a contemporary art style that "has its roots in the traditional working of Castelli's ceramics," said a statement from the commission.

The statues in St. Peter's Square are "only a few pieces" of a 54-statue collection created by students and teachers of Castelli's "F.A. Grue" Art Institute between 1965 and 1975 and included sculptural representations of the Magi and an angel placed above ceramic statues of the Holy Family. 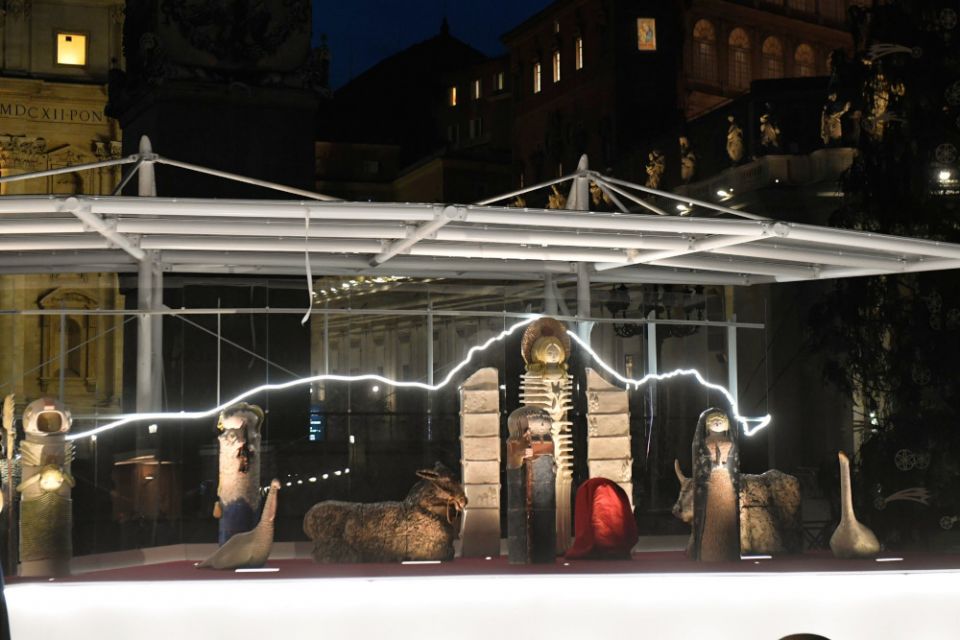 The Nativity scene is pictured in St. Peter's Square during a Christmas tree lighting ceremony at the Vatican Dec. 11, 2020. (CNS/Vatican Media)

The cylindrical ceramic statues surrounding Joseph, Mary and baby Jesus included a bagpiper, a shepherdess holding a jug and even an astronaut, meant to reference the history of ancient art and scientific achievements in the world.

The Christmas tree in St. Peter's Square was a 98-foot-tall red spruce tree, which hails from one of the "most intact" forest reserves in Slovenia, the statement added.

Thanking the delegations for their gifts, the pope said that "this year, more than ever, they are a sign of hope for the Roman people and for those pilgrims who will have the opportunity to come and admire them."

Both the tree and the Nativity scene, Francis said, create "a favorable Christmas atmosphere" that helps Christians "live the mystery of the Redeemer's birth with faith."

"In the creche, everything speaks of the 'good' poverty, the evangelical poverty, that makes us blessed," he said. "By contemplating the Holy Family and the various characters, we are attracted by their disarming humility."