People unwilling to be challenged by God's mercy will grumble, pope says 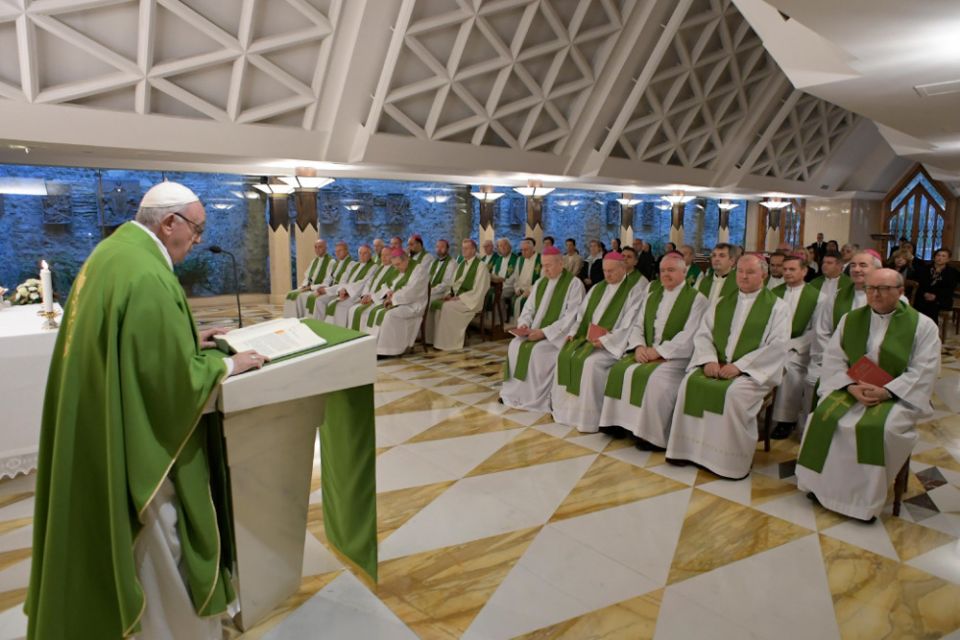 Pope Francis gives the homily as he celebrates morning Mass in the chapel of his residence, the Domus Sanctae Marthae, at the Vatican Nov. 8. (CNS/Vatican Media)

Vatican City — The sin of grumbling and complaining is often triggered by a desire to avoid being challenged or upset by seeing Christ's unexpected mercy at work, Pope Francis said.

The way Christ gave witness was "something new for that era," the pope said, because it was thought that being with sinners "made you impure, like touching a leper."

That is why the "doctors of the law," scribes and Pharisees stayed far away from those who sinned and why they complained about Jesus' unusual ways, the pope said Nov. 8 in his homily during Mass in the Domus Sanctae Marthae.

They would read but never understand what God meant by "I desire mercy, not sacrifice," the pope said. But Jesus gives concrete witness to this mercy by the way he interacts with people, ending old practices and taking risks.

The pope's homily looked at the day's Gospel reading of the parable of the lost sheep, according to St. Luke.

When sinners drew close to Jesus to listen to him, the Pharisees and scribes "began to complain, saying, 'This man welcomes sinners and eats with them.' "

The scribes didn't say, "Oh look! This man seems good because he is trying to convert sinners," the pope said. Instead they start making negative comments to undercut Jesus' witness.

Rather than engaging in dialogue or "trying to resolve a conflicted situation, they secretly grumble, always in whispers because they have no courage to speak frankly," he said.

This negative reaction to the way someone gives witness or to "a person that I don't like" exists on all levels: in families, between individuals, in parishes and dioceses, even in nations and politics, he said.

"This is terrible — when a government is not honest, and it tries to smear its adversaries with complaining, whether it be defamation, calumny," the pope said. Dictatorships, for example, take control of media outlets and, through them, "begin to grumble, to belittle all those who are a danger to the government."

Jesus, however, reacts to complaining not by condemning the scribes but by using the very same method they always employed against him — by asking a question, the pope said. In the Gospel story Jesus asks, "What man among you having a hundred sheep and losing one of them would not leave the 99 in the desert and go after the lost one until he finds it?"

The Pharisees and doctors of the law, Pope Francis said, figure it makes more sense to let the one go in order to keep the larger number safe.

"They are incapable of forgiving, of being merciful, of receiving," the pope said. "They choose the opposite of Jesus," who does seek out the one sheep and when he does find it, he sets it on his shoulders with great joy.

That is the other thing the doctors of the law don't understand — the joy and celebration of the Gospel, the pope said.

Giving witness to God's mercy attracts many people and "makes the church grow," the pope said. But it also provokes or irritates others, who start to grumble, using their complaints like a shield "so that this witness does not harm me."

Vatican | People unwilling to be challenged by God's mercy will grumble, pope says