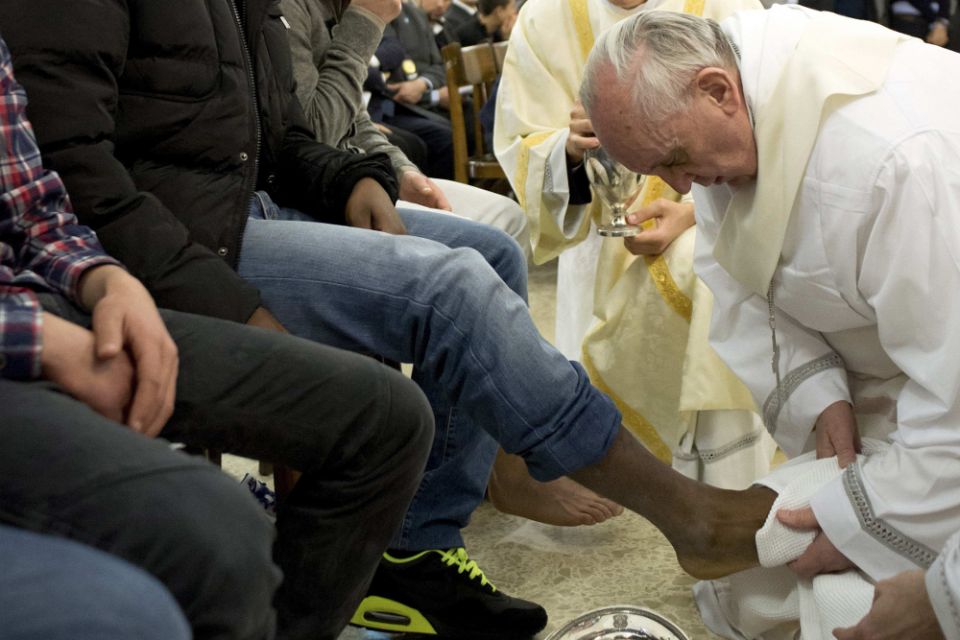 Pope Francis washes the foot of an inmate during the Holy Thursday Mass at Casal del Marmo prison for minors in Rome in this March 28, 2013, file photo. Pope Francis will celebrate Mass March 29 at Rome's Regina Coeli prison and wash the feet of 12 inmates. (CNS/L'Osservatore Romano via Reuters)

Vatican City — Pope Francis once again will celebrate the Holy Thursday Mass of the Lord's Supper in a prison and will wash the feet of 12 inmates.

The pope will celebrate the evening Mass on March 29 at Rome's Regina Coeli prison, the Vatican announced March 20.

A former convent built in the 1600s, Regina Coeli has operated as a prison since the 1890s. Although the government says the capacity is just over 600 inmates, the monthly census since March 2017 has been more than 900. More than half of the inmates are non-Italians.

The prison is just over a mile from St. Peter's Square.

From the beginning of his pontificate, Pope Francis has celebrated the annual Holy Thursday evening liturgy at a place of particular suffering. His immediate predecessors celebrated the Mass either in either St. Peter's Basilica or the Basilica of St. John Lateran.

In 2013, for his first papal celebration of Holy Thursday, he went to Rome's Casal del Marmo juvenile detention center, where he washed the feet of young male and female offenders. The next year, he presided over the Mass and foot-washing ritual at a rehabilitation facility for the elderly and people with disabilities on the outskirts of Rome. In 2015, he went to Rome's main prison, Rebibbia, where he celebrated the Mass with the male prisoners there and women from a nearby women's detention facility. In 2016, he celebrated with refugees at a center north of Rome. And, in 2017, he went to a prison in Paliano, some 45 miles from Rome.