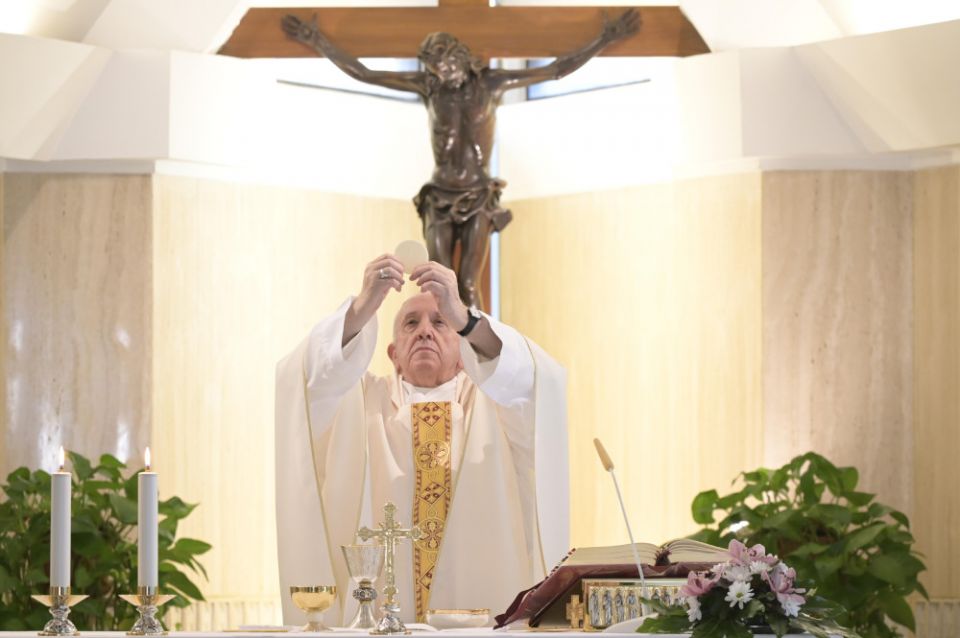 Pope Francis celebrates Mass in the chapel of his residence, the Domus Sanctae Marthae, at the Vatican July 8, 2020. He was marking the seventh anniversary of his first trip as pope to the island of Lampedusa, where thousands of migrants head each year seeking a better life in Europe. (CNS/Vatican Media)

Vatican City — Decrying the unimaginable "hell" migrants experience in detention centers, Pope Francis urged all Christians to examine how they do or don't help — as Jesus commanded — the people God has placed in their path.

Christians must always seek the face of the Lord, who can be found in the hungry, the sick, the imprisoned and foreigners, the pope said on the anniversary of his first pastoral visit as pope to the Italian island of Lampedusa.

Jesus warned everyone, "whatever you did for one of these least brothers of mine, you did for me," and Christians today must look at their actions every day and see if they have even tried to see Christ in others, the pope said in his homily during Mass July 8.

"Such a personal encounter with Jesus Christ is possible also for us, disciples of the third millennium," he said.

The Mass, held in the chapel of the pope's residence, marked the seventh anniversary of his first apostolic journey to an island that has been a major destination point for migrants seeking a new life in Europe.

However, since 2014, at least 19,000 people have died, drowning in the Mediterranean Sea during those boat crossings. Francis mourned their deaths during his 2013 visit with prayers and tossing a floral wreath into the rippling water.

In his homily at the Vatican chapel July 8, he remembered those who are trapped in Libya, subjected to terrible abuse and violence and held in detention centers that are more like a "lager," the German word for a concentration camp. He said his thoughts were with all migrants, those embarking on a "voyage of hope," those who are rescued and those who are pushed back.

"Whatever you did, you did for me," he said, repeating Jesus' warning.

The pope then took a moment to tell the small congregation — all wearing masks and sitting at a distance from one another — what had struck him about listening to the migrants that day in Lampedusa and their harrowing journeys.

He said he thought it strange how one man spoke at great length in his native language, but the interpreter translated it to the pope in just a few words.

An Ethiopian woman, who had witnessed the encounter, later told the pope that the interpreter hadn't even translated "a quarter" of what was said about the torture and suffering they had experienced.

"They gave me the 'distilled' version," the pope said.

"This happens today with Libya, they give us a 'distilled' version. War. Yes, it is terrible, we know that, but you cannot imagine the hell that they live there," in those detention camps, he said.

And all these people did was try to cross the sea with nothing but hope, he said.

"Whatever you did … for better or for worse! This is a burning issue today," the pope said.

The ultimate goal for a Christian is an encounter with God, he said, and always seeking the face of God is how Christians make sure they are on the right path toward the Lord.

The day's first reading from the Book of Hosea described how the people of Israel had lost their way, wandering instead in a "desert of inequity," seeking abundance and prosperity with hearts filled with "falsehood and injustice," he said.

"It is a sin, from which even we, modern Christians, are not immune," he added.

The prophet Hosea's words call everyone to conversion, "to turn our eyes to the Lord and see his face," Francis said.

"As we undertake to seek the face of the Lord, we may recognize him in the face of the poor, the sick, the abandoned, and the foreigners whom God places on our way. And this encounter becomes for us a time of grace and salvation, as it bestows on us the same mission entrusted to the apostles," he said.

Christ himself said "it is he who knocks on our door, hungry, thirsty, naked, sick, imprisoned, seeking an encounter with us and requesting our assistance," the pope said.

The pope ended his homily by asking Our Lady, the solace of migrants, "help us discover the face of her son in all our brothers and sisters who are forced to flee from their homeland because of the many injustices that still afflict our world today."

Vatican | Pope: Migrants seeking new life end up instead in 'hell' of detention