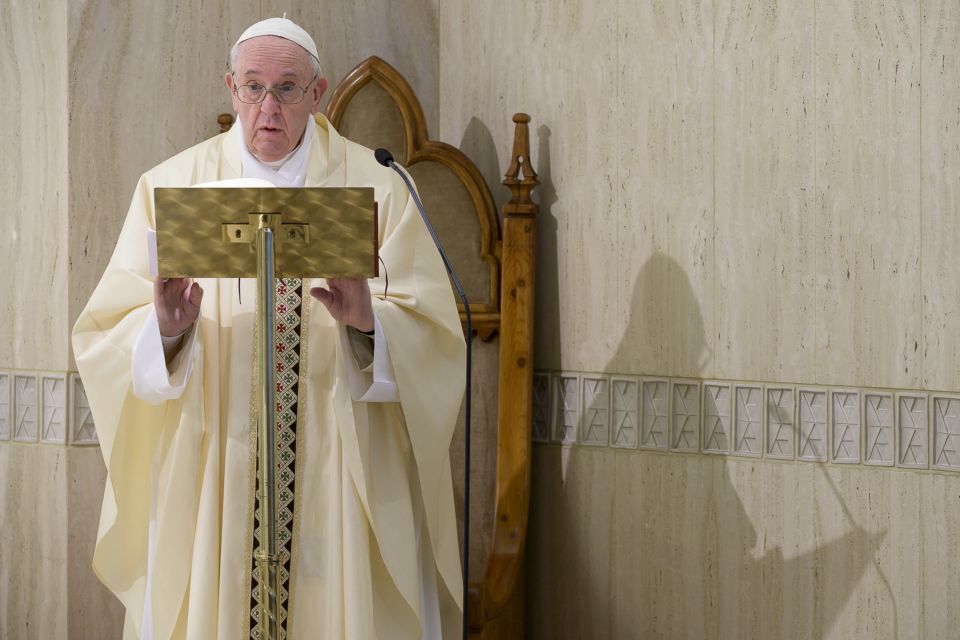 Pope Francis gives the opening prayer as he celebrates Mass May 4, 2020, in the chapel of his Vatican residence, the Domus Sanctae Marthae. The pope prayed for families and that they would be creative and patient during quarantine. (CNS photo/Vatican Media)

Vatican City — Praying for families around the world who have been restricted to their homes because of the COVID-19 pandemic, Pope Francis included mention of victims of domestic violence.

"Sometimes there is domestic violence. Let us pray for families so that they go on in peace with creativity and patience during this quarantine," the pope said May 4 at the start of his livestreamed Mass in the chapel of his residence, the Domus Sanctae Marthae.

He asked people to pray for all families that have been shut in at home and for those that have been finding ways to do new things and be creative with their children and others.

In his homily, the pope reflected on the problem of division — particularly caused by people choosing their own interpretation of God's law — and God's desire for unity and his redemption of everyone.

"We have one redeemer. One sole unity — Christ died for everyone," the pope said. However, people may be tempted, like St. Paul had been, to feel special and chosen, and, therefore, label and distance others, he added.

"This is a disease of the church, a disease that is born of ideologies or religious factions," he said.

Pointing to the divisions that happened after the Second Vatican Council, he said that while it is legitimate for people to express what they think, it must happen "in the unity of the church, under Jesus the shepherd."

A retired cardinal, whom he did not name, tells Catholics that the church is like a river, "some people are on this side, some on the other side, but what is important is that they are all in the river."

"This is the unity of the church," Francis said, where everyone is together, each with their own "features."

"This does not divide, it is not an ideology, it is licit" because the church is expansive, like a river, "because this is the way the Lord wants it to be."

This wide embrace is what Jesus talks about in the day's Gospel reading, the pope said, when he says, "I have other sheep that do not belong to this fold. These also I must lead, and they will hear my voice, and there will be one flock, one shepherd."

Jesus laid down his life for everyone, the pope said, even for those who make people's lives miserable, even for crooks, "even for people who do not believe in him or who belong to another religion. He died for everyone."

Because Jesus is the one shepherd for everybody, the Holy Spirit guided St. Peter so that he would visit the homes of pagans and eat with them, while the apostles, instead, were scandalized.

"May the Lord free us from that psychology of division, to divide," the pope said, "and help us see this aspect of Jesus, this great thing of Jesus, that, in him, we are all brothers and sisters and he is everyone's shepherd."

Pope: Jubilee for the Earth a time for restoring bond with God, creation