Pope: Seminarians learn more from their leaders' lives than their words 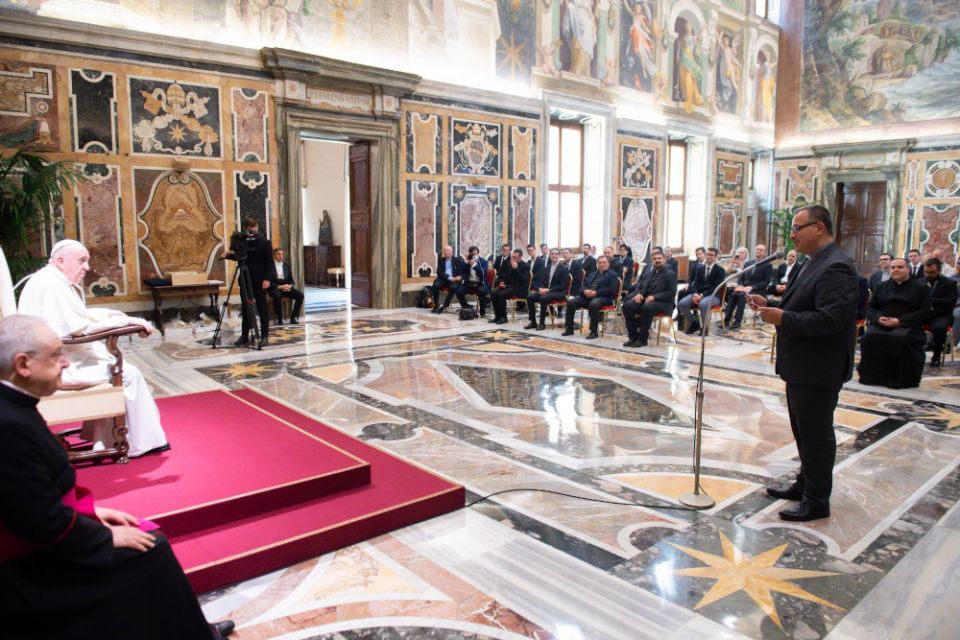 Pope Francis is pictured with members of the Pontifical Regional Seminary Pius XI of the Marche Region in Ancona, Italy, during an audience at the Vatican June 10, 2021. (CNS/Vatican Media)

Vatican City — Seminarians can learn more from the way their bishops, rectors, spiritual directors and formators live than from what they say, Pope Francis said.

Noting the yearlong celebration underway dedicated to St. Joseph, the pope said all those responsible for the formation of new priests — primarily their bishops, but also staff at their seminaries and schools — need to have St. Joseph as their inspiration and model, caring for and protecting priestly vocations.

During an audience at the Vatican June 10 with members of the Pontifical Regional Seminary Pius XI of the Marche Region in Ancona, Italy, the pope said that seminarians "can learn more from your life than from your words."

Therefore, he said, "may they learn docility from your obedience; diligence from your dedication; generosity toward the poor from the witness of your sobriety and helpfulness; paternity from your deep and chaste affection."

The pope also urged seminarians to seek out and visit elderly priests, who are "the church's treasure," but are often forgotten or isolated in care facilities. They possess wisdom and knowledge that has matured like "fine wine" and can help new ministers in solving their pastoral problems.

Francis told the students that the seminary is not a place for distancing themselves from "reality, dangers and much less from other people, but, on the contrary, [it is] to make you become closer to God and [your] brothers," and the whole world.

It is where one learns to open one's heart wide to everyone and truly encounter others, he said.

Just as they must embrace others, he said, the seminarians also must embrace their own humanity, their personal "complications," feelings and affections, and open up with honesty to their formators, avoiding all temptation of putting on a false front or looking like "the little angel."

"Cultivate relationships that are honest, joyful, humanely liberating, fulfilling and capable of friendship, feelings and fruitfulness," he said.

They should read authors who were great "humanists," he said, meaning "those writers who knew how to look inside the human soul" and, like Fyodor Dostoevsky, "reveal the beauty of the love that saves."

Such books help people develop their "heart" and "grow in humanity," he said. A priest might study hard and be able to explain theology, philosophy and the like, "but if he is not human, he's useless. He should get out and be a professor."

Seminarians also should not be overly self-satisfied with being good at social media and other forms of communication, he said. "Only being transformed by the Word of God will you be able to communicate words of life. The world is thirsty for priests who are able to communicate the goodness of the Lord to whoever has experienced sin and failure."

The world needs priests who are "experts in humanity, shepherds ready to share the joys and the struggles of their brothers and sisters, men who let themselves be struck by the cry of those who suffer," he said.

Seminarians can look for role models by tapping into "the humanity of Jesus of the Gospel and the tabernacle," in the lives of saints and "heroes of charity," and also in those who handed down the faith to them — their parents and grandparents, he said.

Vatican | Pope: Seminarians learn more from their leaders' lives than their words

'The Holy Game' is a deep dive into seminarians and soccer