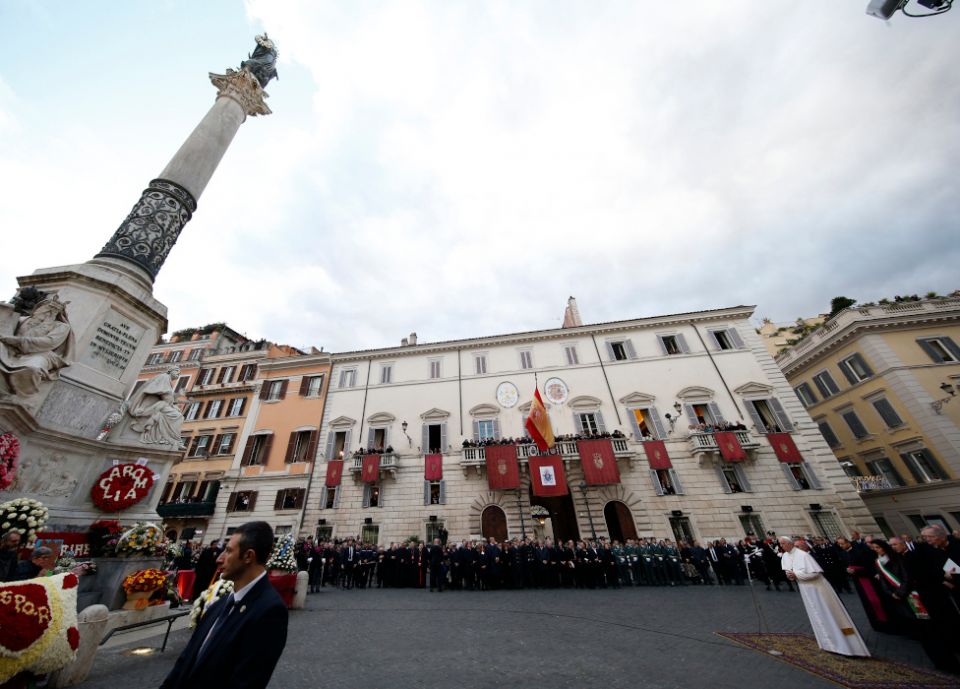 Pope Francis leads a prayer service at a Marian statue overlooking the Spanish Steps in Rome Dec. 8, 2019, the feast of the Immaculate Conception. The pope says the declaration of Rome as the capital of united Italy 150 years ago was "providential." (CNS/Paul Haring)

Vatican City — The loss of the papal states and the declaration of Rome as the capital of a united Italy 150 years ago was a "providential" event that changed the city and the church, Pope Francis said.

Cardinal Pietro Parolin, Vatican secretary of state, read Francis' message Feb. 3 at an event sponsored by the city to launch celebrations of the anniversary.

The pope echoed the words of then-Cardinal Giovanni Battista Montini — the future St. Paul VI — who said in 1962 that the loss of the papal states "seemed like a catastrophe, and for the pontifical dominion over territory it was. ... But providence — as we can now see — arranged things differently, almost dramatically orchestrating events."

Since 1929, when Italy and the Holy See signed the Lateran Pacts recognizing each other's legitimacy and independence, popes have said the Catholic Church recognizes the separate roles of church and state but insists on the need for "healthy secularism" — as retired Pope Benedict XVI called it.

In his 2012 apostolic exhortation, "The Church in the Middle East," the retired pope explained that such church-state separation "frees religion from the encumbrance of politics and allows politics to be enriched by the contribution of religion, while maintaining the necessary distance, clear distinction and indispensable collaboration between the two spheres."

In his message to the Rome celebration, Francis noted how Rome has become a multiethnic and multireligious city over the past 150 years, but Catholics always have had a key role and the church has "shared the joys and sufferings of the Romans."

Francis then highlighted three key events: the Nazi occupation of the city for nine months in 1943-1944 with the "terrible roundup to deport the Jews" Oct. 16, 1943; the Second Vatican Council; and the 1974 Rome diocesan conference on the city's ills, especially the poverty and lack of services available on its outskirts.

The Nazi occupation and persecution of Rome Jews, he said, was "the Shoah lived in Rome." In response, "ancient barriers and painful distances" were overcome as Catholics and their institutions hid Jews from the Nazis, he said.

During the Second Vatican Council from 1962 to 1965, the city was filled with Catholic bishops and ecumenical and other observers, he noted. "Rome shone as a universal, catholic, ecumenical space. It became the universal city of ecumenical and interreligious dialogue and of peace."

And, finally, he said, in choosing to highlight the 1974 diocesan conference, he wanted to underline how the city's Catholic community listens to the cries of the poor and the people on the "peripheries."

"The city must be the home of all," he said. "It is a responsibility today as well. Modern peripheries are marked by too much misery, inhabited by great solitude and lacking social networks."

Many of Italy's poor, not to mention migrants and refugees, look to Rome as a place of salvation, the pope said.

"Frequently, incredibly, they look at the city with greater expectations and hope than we Romans do since, because of many daily problems, we look at it in a pessimistic way, almost as if it were destined to fall."

"But no! Rome is a great resource for humanity," he said, and it must seek new ways to renew itself and promote a greater inclusion of all who live there.

The holy years proclaimed by the church every 25 years help promote that renewal and openness, he said. "And 2025 is not that far away."

Vatican | Rome has vocation of dialogue and inclusion, pope says