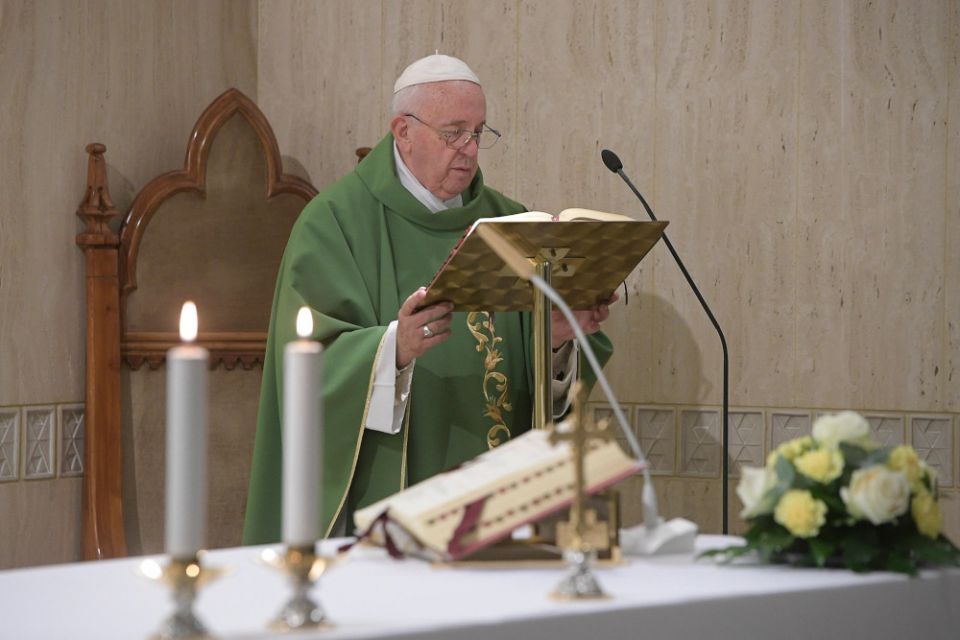 Pope Francis celebrates morning Mass in the chapel of his residence, the Domus Sanctae Marthae, at the Vatican Oct. 29, 2019. (CNS/Vatican Media)

Vatican City — Christians can become stagnant if they do not have the crashing waves of hope moving in their lives, Pope Francis said. "Hope is this living in tension, always; knowing that we cannot make a nest here: the life of the Christian is 'in a forward-moving tension.' If a Christian loses this perspective, his or her life becomes static, and things that do not move are corrupted," the pope said in his homily Oct. 29 at morning Mass in Domus Sanctae Marthae.

The pope reflected on the day's reading from St. Paul's letter to the Romans, in which the apostle says his sufferings are "nothing compared to the glory to be revealed for us."

"For creation awaits with eager expectation the revelation of the children of God," St. Paul says, in the hope that "creation itself would be set free from slavery to corruption."

Comparing Christian life to water, the pope said Christians must be willing to be "stretched out, to be in tension with the shoreline," otherwise they will "end up corrupted."

For that person, he said, "Christian life will be a philosophical doctrine, he or she will live it that way and say that it is faith but, without hope, it is not."

Hope, the pope continued, is "the most difficult to understand" because it is "the humblest of the virtues" that only the poor can possess.

"If we want to be men and women of hope, we must be poor, not attached to anything," he said. "Hope is humble, and it is virtue that is worked on — we may say — every day."

Francis said that while hope is a virtue that cannot be seen, "it should be the air that a Christian breathes." He called on the faithful to be open to the promise of hope in Christian life that is kept alive by the "Spirit that works in us."

"May the Lord give us, to all of us, this grace of living in tension, in tension but not through nerves, or problems. No; in tension through the Holy Spirit who throws us to the other side of the shore and keeps us in hope," he said.