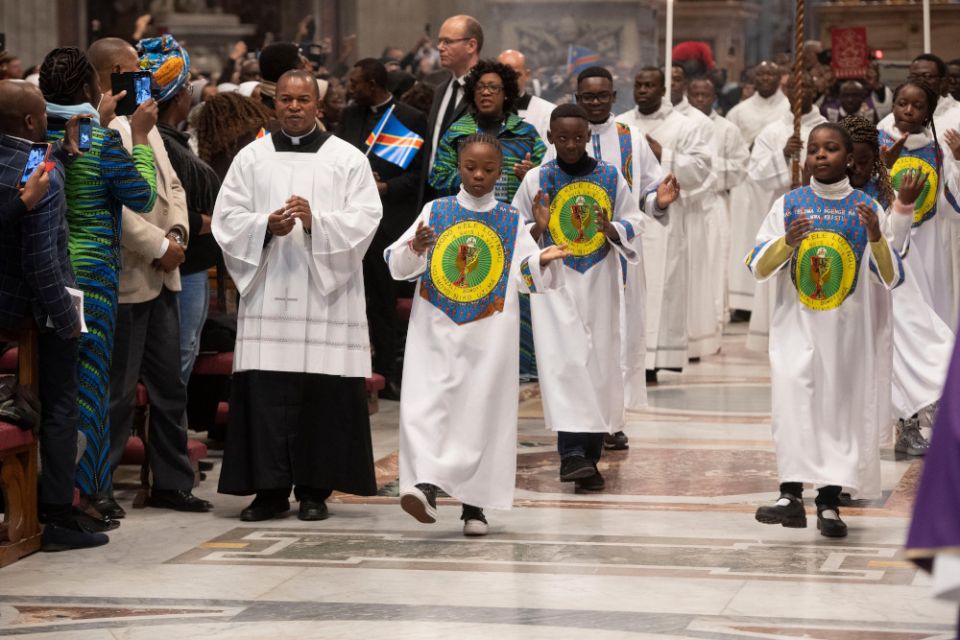 Altar servers are pictured as Pope Francis celebrates a Mass in the Zairean rite for the Congolese community in St. Peter's Basilica at the Vatican in this Dec. 1, 2019, file photo. In the preface to a new book, the pope said the approval of the Zairean rite of the Roman Missal shows that it's also possible to develop a rite for the Amazon region. (CNS photo/Vatican Media)

Vatican City — The approval decades ago of a Zairean rite of the Roman Missal demonstrated that it is possible also to develop a rite for the Amazon region, Pope Francis said in a preface to a new book.

The Zairean rite, which is an example of liturgical inculturation, "suggests a promising way also for the eventual elaboration of an Amazonian rite, in that the cultural needs of a specific area of the African context are acknowledged without distorting the nature of the Roman Missal as a guarantee of continuity with the ancient and universal tradition of the church," the pope wrote.

The pope's remarks appear in the preface of a new book, "Pope Francis and the Roman Missal for the Dioceses of Zaire: A Promising Rite for Other Cultures." The book, currently only in Italian, was being released Dec. 9 by the Vatican publishing house. The Italian Catholic newspaper, Avvenire, published the pope's text Dec. 1.

Edited by Congolese Sister Rita Mboshu Kongo, a theologian and member of the Daughters of Mary Most Holy, the book is meant to help readers learn more about the different aspects of the Zairean rite, which incorporates elements of Congolese culture and reflects the needs of Catholics in the sub-Saharan African nation, formerly Zaire, now Congo.

The missal received formal approval from the Vatican in 1988 after a long process of inculturation encouraged by the country's bishops, St. Paul VI and St. John Paul II. Work on the rite had begun in 1961 and the Second Vatican Council's Constitution on the Sacred Liturgy, adopted in 1963, called for liturgical adaptation.

"It is so far the only inculturated rite of the Latin church issued after the Second Vatican Council," the pope wrote in the book's preface.

The pope recalled celebrating Mass according to the Zairean Rite in St. Peter's Basilica Dec. 1, 2019, to mark the 25th anniversary of the Congolese Catholic community in Rome.

The liturgy features the use of drums, ululations and dance, and has slight changes in order from the Roman rite.

The pope wrote that the celebration "resonates" a culture and spirituality animated by religious song following African rhythm and it represents "true progress in the rooting of the Christian message in the Congolese soul."

It is a "joyous" celebration, which means it is "a true place of encounter with Jesus," he said, because "with Christ joy is constantly born anew."

"The liturgy must touch the heart of the members of the local church," in a way that "strikes a chord" or is suggestive or appealing.

"Christianity does not have simply one cultural expression, but rather, remaining completely true to itself, with unswerving fidelity to the proclamation of the Gospel and the tradition of the church, it will also reflect the different faces of the cultures and peoples in which it is received and takes root," he wrote.

"It is clear that each people, after having the personal experience of the transformative encounter with Christ, seeks to invoke God, who is revealed through Jesus Christ with his words, with their religious, poetic, metaphoric, symbolic and narrative language" and style, he wrote. The encounter with Christ brings the grace that transforms human experience in all its dimensions, he added.

This is the process the Congolese bishops followed in their desire to pray to God, not with words borrowed from others, but with the transformation of their own socio-cultural elements, he said.

That is why the Zairean rite represents a promising example and path for the development of an Amazonian-rite liturgy, he said. Several working groups at the Synod of Bishops for the Amazon in 2019 supported the creation of an "Amazonian Rite," which would incorporate symbols and gestures familiar to indigenous people while maintaining the essential elements of the Eucharist.

In the book preface, Pope Francis said his postsynodal apostolic exhortation, "Querida Amazonia," stated explicitly that "we can take up into the liturgy many elements proper to the experience of indigenous peoples in their contact with nature, and respect native forms of expression in song, dance, rituals, gestures and symbols. The Second Vatican Council called for this effort to inculturate the liturgy among indigenous peoples; over 50 years have passed and we still have far to go along these lines."

He said he hoped the new book "may help walking in this direction."