Francis to critics: Do I need to say the Creed? 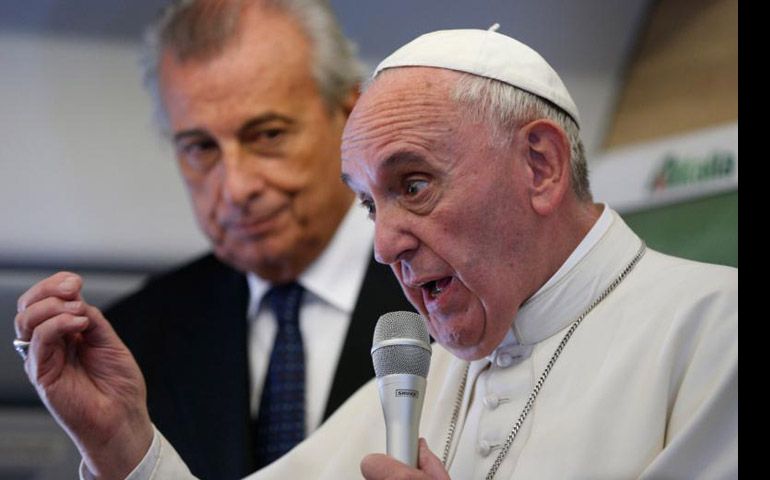 ABOARD THE PAPAL FLIGHT FROM CUBA — Pope Francis defended his position on the economy, the environment and other social issues as faithful repetitions of the basic Catholic social doctrine.

Speaking to reporters flying with him from Cuba to Washington Sept. 22, the pope was asked about comments, mainly from the United States, claiming the pope is a communist and about the Newsweek headline, "Is the pope Catholic?"

"I am certain I have never said anything more than what is in the social doctrine of the church," he responded. "I follow the church and in this, I do not think I am wrong."

"Maybe I have given an impression of being a little bit to the left," the pope admitted. "But if they want me to recite the Creed, I can!"

Pope Francis said a cardinal "who is a friend" was telling him about an older Catholic lady, "a good woman, but a bit rigid," who had questions about the description of the Antichrist in the Book of Revelation and if that was the same thing as an "anti-pope."

"'Why are you asking,' the cardinal said. 'Well, I am sure Pope Francis is the anti-pope.'

"'Well, because he renounced the red shoes, which are so historic,'" the pope said the woman responded.

People have all sorts of reasons to think, "he's communist or he's not communist," the pope said.

Pope Francis also referred to the social teaching of the church when asked about the U.S. economic embargo of Cuba. The social doctrine is critical of economic embargoes, especially those that last for years, because of their impact on the poor.

But he said he did not intend to discuss the Cuban embargo in his speech to the U.S. Congress, but he would talk more in general of the importance of bilateral agreements to promote progress, peace and the common good.

"The problem of the embargo is part of the negotiations. This is public. Both presidents have said this. It is part of the journey toward good relations that is underway," he said.

"My desire is that they end up with a good result, with an accord that satisfies both sides," he said.

The Sept. 19-22 visit to Cuba was "a bit of a coincidence," the pope said. He had hoped to enter the United States through Ciudad Juarez, Mexico, like so many people do. But the idea changed when Cuban President Raul Castro and U.S. President Barack Obama announced they had an agreement to begin normalizing their relations.

Pope Francis also was asked why he did not meet Cuban dissidents and other opponents of the Cuban opposition.

"It was very clear I was not holding private audiences in the nunciature -- not even with other heads of state," the pope said, apparently referring to Argentine President Cristina Fernandez de Kirchner, who had traveled to Havana for the papal visit.

Officials at the Vatican Embassy in Havana did, however, make a telephone call to a representative of a dissident group and invited several members of the group to be among those greeted by the pope at Havana's cathedral, he said.

"I greeted many people there, but no one identified himself as a dissident," Pope Francis said.

Pope Francis was also asked about his private meeting with former Cuban President Fidel Castro and specifically if he thought Castro had "repented" of having treated the Catholic Church so harshly.

"'Repentance' is something intimate, having to do with the conscience," he said.

"In my meeting with Fidel we spoke about the Jesuits he had known" as a student of a Jesuit school, the pope said, and about how hard Jesuits used to make their students work.

"And we spoke a lot about the encyclical, 'Laudato Si',' because he is very interested in the theme of ecology. It was not a very formal meeting, but spontaneous, with his family there," the pope said.

"We did not talk about the past," he said, except for "his experience with the Jesuits."

Vatican | Francis to critics: Do I need to say the Creed?

Francis lands in US for highly anticipated visit, greets Obama