by Joshua J. McElwee
Vatican
This article appears in the Francis in Chile and Peru feature series. View the full series. 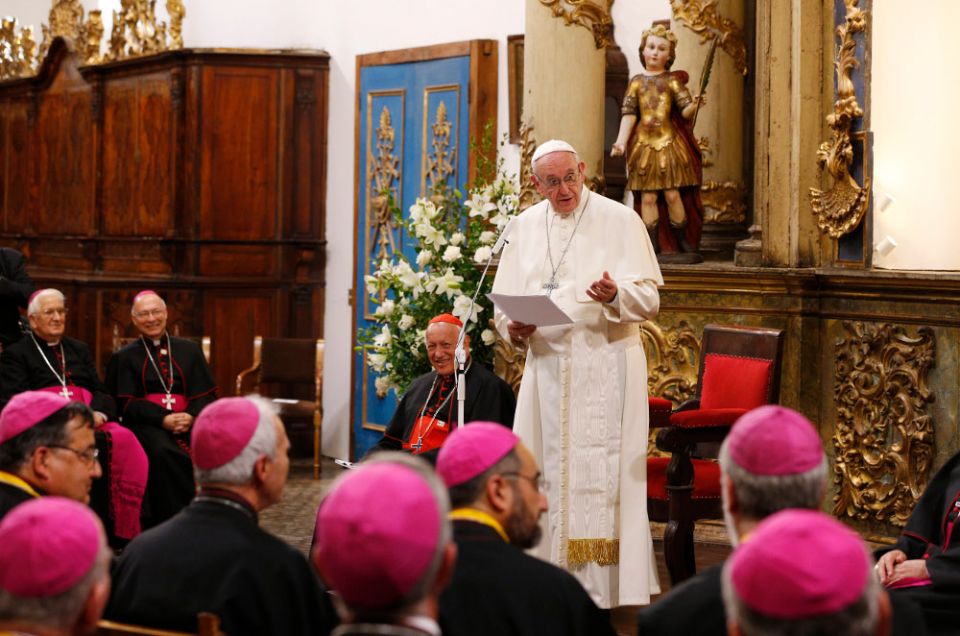 Pope Francis meets with Chile's bishops in the sacristy of the Metropolitan Cathedral in Santiago, Chile, Jan. 16. (CNS/Paul Haring)

Santiago, Chile — Pope Francis has asked Chile's Catholic clergy to have the fortitude to ask forgiveness from those who were abused by priests, saying abuse survivors had their trust in the church betrayed and that clerics should seek to "call reality by its name."

But the pontiff also acknowledged the discomfort experienced by priests not caught up in the scandal, telling hundreds of clergy gathered for a meeting Jan. 16 at Santiago's Cathedral of the Assumption he knows they operate now in an atmosphere of suspicion.

Pope Francis met with "a small group" of survivors of clergy sexual abuse on his first of three days in Chile, Vatican spokesman Greg Burke announced at a press conference late Jan. 16.

Burke said Francis held the meeting after lunch in a "strictly private" manner, with just the pope and the victims present, "so they could recount their suffering." The spokesman said the pontiff "listened to them and prayed and cried with them."

Burke declined to provide any further comment, other than to say the survivors were all abused by clergy.

Francis has met survivors only once before on his 21 other trips abroad: during his September 2015 visit to the United States. He has occasionally come under criticism for not meeting survivors during his trip, particularly during his February 2016 visit to Mexico.

"I know the pain resulting from cases of abuse and I am attentive to what you are doing to respond to this great and painful evil," Francis told the clergy, before listing several of types of pain caused by the abuse.

One kind of pain, said the pope, was that "of the harm and suffering of the victims and their families, who saw the trust they had placed in the Church's ministers betrayed."

Another kind of pain, he said, was for the priests, who "after working so hard, have seen the harm that has led to suspicion and questioning."

"I know that at times you have been insulted in the metro or walking on the street, and that by going around in clerical attire in many places you pay a heavy price," the pope told the clergy.

"For this reason, I suggest that we ask God to grant us the clear-sightedness to call reality by its name, the courage to ask forgiveness and the ability to listen to what he tells us," he said.

Francis' recognition of the pain experienced by both survivors and innocent priests came at the end of his first of three days in Chile, a traditionally Catholic country now reeling from recent revelations of abuse.

The pope also faces vocal criticism over his 2015 appointment of Bishop Juan Barros Madrid of Osorno, Chile, who is accused of covering-up for notorious abuser Fr. Fernando Karadima in the 1980s and ‘90s.

Anger at the pope and the church has led to an atmosphere in Santiago not before experienced during one of Francis' other 21 visits abroad.

"These remarks reveal the pope’s own lack of clear-sightedness," said Anne Barrett Doyle, who helps run BishopAccountability.org. "The 'reality' that he should call by its name is the reality of collusion, apathy and cowardice among priests."

"The pope could have delivered a very different message," said Barrett Doyle. "He could have urged priests to face their own complicity in the secrecy that shrouds clergy sex abuse."

"This is another missed opportunity, another indication that Pope Francis still doesn’t get it," she said.

Francis spoke about the abuse scandal as one part of a longer reflection with the clergy on the interplay between a consecrated person's own spiritual calling and his or her service to the community.

The pontiff used the apostle Peter as a model, pointing to the disciple's imperfections as signs of his humanity and his strength.

"We are not here because we are better than others; we are not superheroes who stoop down from the heights to encounter mere mortals," Francis told the clergy. "Rather, we are sent as men and women conscious of having been forgiven. That is the source of our joy."

"We are not asked to ignore or hide our wounds," he said. "A church with wounds can understand the wounds of today’s world and make them her own, suffering with them, accompanying them and seeking to heal them."

After meeting with the priests Jan. 16, Francis spoke separately with Chile's 50 bishops, including Barros. He exhorted them to respect laypeople.

"A failure to realize that the mission belongs to the entire Church, and not to the individual priest or bishop, limits the horizon, and even worse, stifles all the initiatives that the Spirit may be awakening in our midst," the pope told the prelates.

"Let us be clear about this," he said. "The laypersons are not our peons, or our employees. They don’t have to parrot back whatever we say."

Earlier in the afternoon Jan. 16 Francis visited Santiago's San Joaquin Women's Prison, a 19th century facility now at double its intended capacity, where he met with about 500 prisoners.

The atmosphere at the prison was emotional. The pope stepped out of his car to a line of an inmate mothers holding babies, waiting to greet him. He stopped to kiss or hold most of them, as some of the mothers wept. 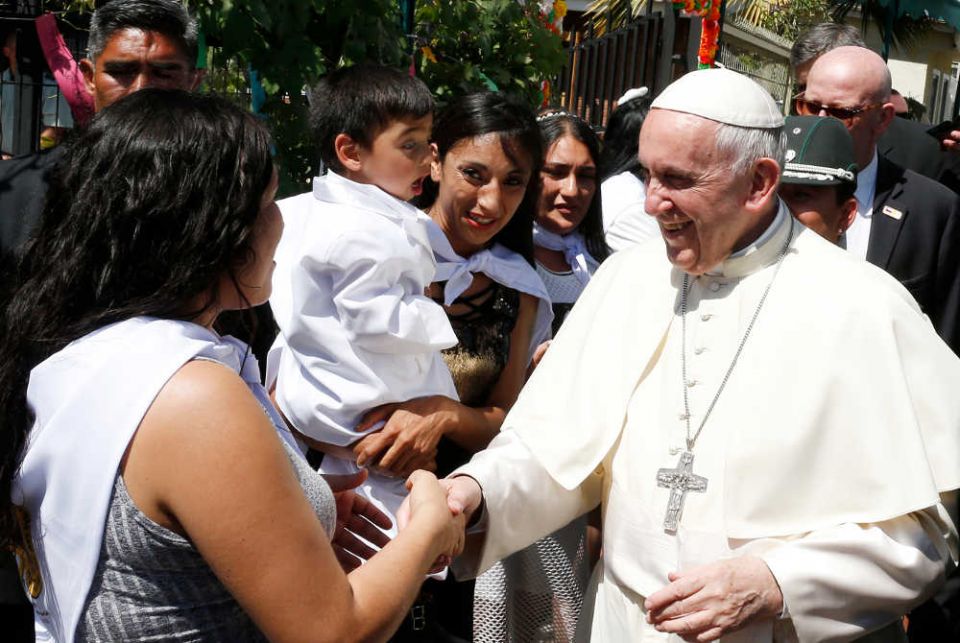 Before Francis offered a short speech focused on the dignity prisoners retain even when they lose their liberty, the inmates broke into a song they had prepared for the occasion, with the refrain: "Another day of life, one less day on my sentence."

Francis' visit to Chile will continue Jan. 17 with a trip to Temuco, a city about 415 miles south of Santiago at the heart of the Araucanía region, home to the indigenous Mapuche people since long before the Spanish arrived in the country in the 16th century.

The Chilean government and the Mapuche have been at odds for nearly three decades over what lands in the region should be controlled by the indigenous group, and the disagreement has as times turned violent, with shootings, kidnappings, and the setting of destructive forest fires.

Upon arriving in Temuco Jan. 17, Francis will celebrate an open-air Mass before having a private lunch with nine representatives of those living in the region. The pope will return to Santiago in the evening for a meeting with young people and a visit to the Pontifical Catholic University of Chile.

The pontiff travels Jan. 18 to Iquique, 1,000 miles north of Santiago, before continuing on that day to Lima, Peru.

A version of this story appeared in the Jan 26-Feb 8, 2018 print issue under the headline: 'Pain and shame': Francis in Chile .

Francis to visit Malta in May, in trip likely to highlight migrants' struggles