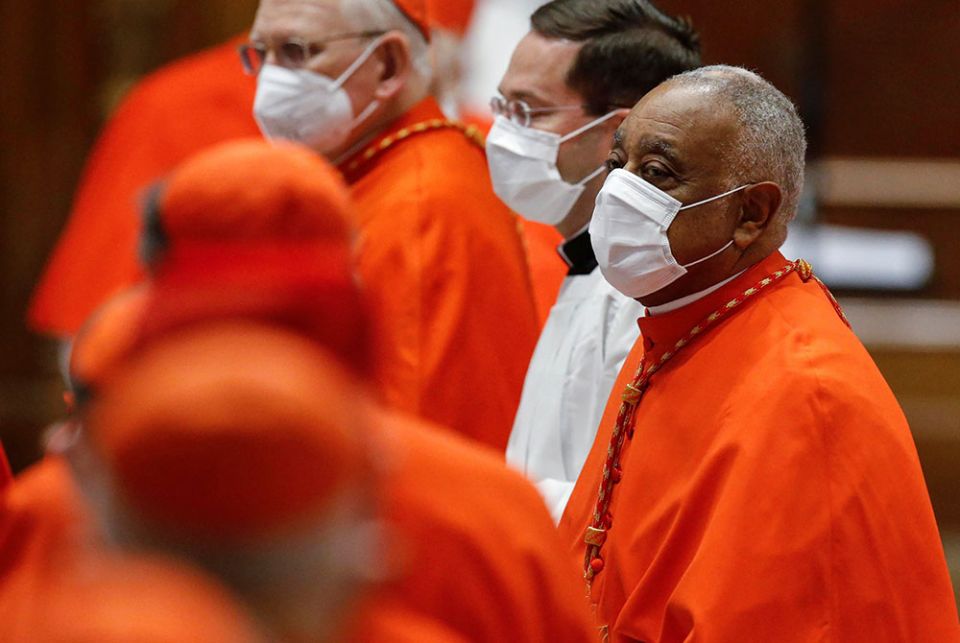 Cardinal Wilton Gregory of Washington wears a protective mask as he attends a consistory led by Pope Francis in St. Peter's Basilica Nov. 28 at the Vatican. Gregory was among 13 new cardinals created by the pope. (CNS/Fabio Frustaci, Reuters pool)

Vatican City — Pope Francis warned the world's Catholic cardinals Nov. 28 against seeing their positions as ones of honor or distinction, stressing that the lives of the church's highest prelates should be those of self-sacrifice and service to others.

In a first of its kind partly virtual ceremony in St. Peter's Basilica to create 13 new cardinals — including Washington, D.C. Archbishop Wilton Gregory and a number of prelates serving in remote regions across the world — the pontiff cautioned the new cardinals not to prioritize their own interests, but those of the people they serve.

Francis even told them not to see themselves in terms of the honorific traditionally given to cardinals, or as "eminences."

"When you feel like that, you are 'off the path,' " the pope warned the new cardinals. "You will no longer be the pastor, close to the people."

The Nov. 28 ceremony, formally known as a consistory, was unprecedented in the long history of the Catholic Church — held during an ongoing global pandemic and under strict precautions to prevent the spread of the coronavirus.

Due to social distancing measures, only about 100 people were able to be physically present for the ceremony, and two of the new cardinals — Brunei Apostolic Vicar Cornelius Sim and Capiz, Philippines Archbishop Jose Advincula — took part from home.

The sanctuary of the basilica was set up with television screens to allow Sim and Advincula, and other global cardinals, to participate in the event via video link. Those present in the basilica all wore masks, except Francis. 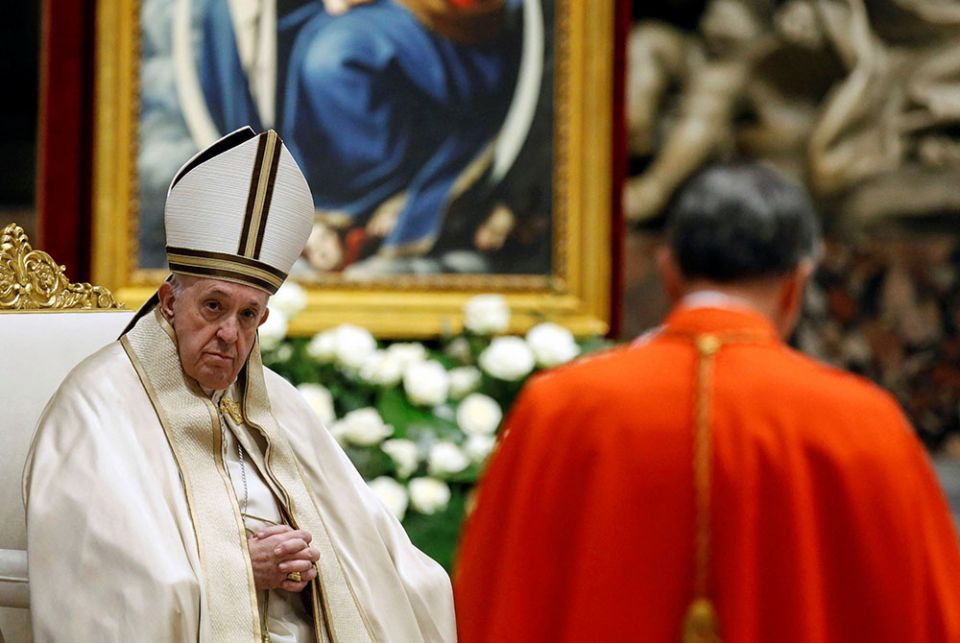 Among the 11 new cardinals present for the event was Gregory, who is Washington's first African American archbishop and now the first Black U.S. cardinal. In a Nov. 24 NCR interview, Gregory said he thought Francis' choosing him was a "very positive endorsement" for the work of the church in the U.S. capital.

Gregory is the fourth American cardinal created by Francis, following Chicago's Blase Cupich, Newark's Joseph Tobin and Kevin Farrell, the prefect of the Vatican's Dicastery for Laity, Family and Life.

Nine of the 13 new cardinals are under the age of 80, meaning they join the ranks of cardinal electors, or those who are tasked with gathering in conclave after the death or resignation of the pontiff to select his successor.

The consistory is Francis' seventh over his nearly eight-year papacy and further cements his influence on the group that will one day elect his successor. The pontiff has now appointed nearly 60% of the cardinal electors: 73 of 128 prelates.

Thirty-nine of the electors were appointed by now-retired Pope Benedict XVI; 16 by Pope John Paul II.

Francis reflected in his homily for the consistory on the story in Mark's Gospel of the apostles James and John asking Jesus if they could sit at his left and right hand when he comes into his glory.

Jesus rebuked the two, telling them: "You do not know what you are asking."

Francis called the story a " 'road sign' for us who today are journeying together with Jesus." The two apostles, said the pope, "want to take a different road — not Jesus' road, but a different one."

"The road of those who, perhaps even without realizing it, 'use' the Lord for their own advancement," the pope termed it.

The ninth new cardinal elector is Mauro Gambetti, a conventual Franciscan who previously served as the custodian of the convent attached to the Basilica of St. Francis in Assisi, Italy.

Among the four new cardinals over the age of 80 is the fifth American cardinal created by Francis: Silvano Tomasi, an Italian and naturalized U.S. citizen who served for 13* years as the Holy See's permanent observer to the United Nations in Geneva.

After the homily during the ceremony, each of the 11 new cardinals present for the event received his new signet ring and red hat, known as a biretta, from Francis before St. Peter's high altar.

Seventy of the world's nations are now represented by at least one cardinal elector.

*This story has been updated to correct the number of years Tomasi served as the Holy See's permanent observer to the U.N. in Geneva.

Vatican | Francis warns Gregory, other cardinals against being 'eminences' in part-virtual consistory

Will the 13 new cardinals come to Rome during a pandemic?

'The Election of Pope Francis' is a day-by-day, ballot-by-ballot tale