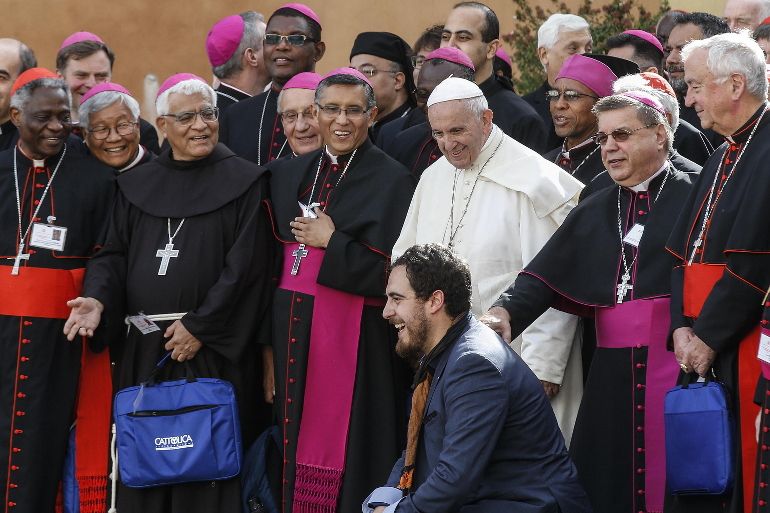 Pope Francis poses for a group photo with bishops and participants at the Synod of Bishops on young people at the Vatican in October 2018. (CNS photo/Fabio Frustaci, EPA)

Vatican City — The global Catholic Church must listen more to the critiques of its younger members and acknowledge that "some things concretely need to change," Pope Francis says in a new teaching document.

But in a dense, nearly 33,000-word apostolic exhortation published April 2, the pontiff offers few insights for what exactly must change or how the church can go about responding to young people who find its teachings or structures outdated.

The new letter, issued in response to a global Synod of Bishops in October 2018 that focused on the needs of young people today, also does not engage the unprecedented call of that meeting's final document for the inclusion of women in the church's all-male decision-making structures.

Although the pope acknowledges that there has been "a fair share of male authoritarianism [and] domination" within the church, he does not reference what the Synod meeting called a "duty of justice" to include women "at all levels" of the global institution.

Likewise, while the new document notes that the Synod expressed a concern that the church's teachings on sexual identity and orientation are a "cause of incomprehension" for some young people, it does not reference the meeting's call for the church to undertake a deeper theological and anthropological study on such matters.

In fact, the letter makes only one reference to gay people, citing the Synod's statement that young people are expressing "an explicit desire to discuss questions concerning the difference between male and female identity, reciprocity between men and women, and homosexuality."

Francis' letter, which the pope signed March 25 during a visit to the Marian shrine in Loreto, Italy, is titled Christus Vivit ("Christ is alive"). Originally written in Spanish but available in six other languages, the document unfolds over nine chapters and 299 numbered paragraphs.

The letter, which at times addresses young people directly and at other times speaks more generally to the whole church, opens in its first two chapters with a series of reflections on the stories of young people in the Old and New Testaments, and on what is known about Jesus' young life.

After reflecting on Jesus' youth, Francis says the church must emulate him by not being "excessively caught up in herself."

"This means humbly acknowledging that some things concretely need to change, and if that is to happen, she needs to appreciate the vision but also the criticisms of young people," the pope states.

Then, making one of the letter's 56 references to the Synod's final document, the pope acknowledges that the meeting said "a substantial number of young people … do not ask the Church for anything because they do not see her as significant for their lives."

Francis says some young people want a church that "listens more, that does more than simply condemn the world."

"To be credible to young people, there are times when [the church] needs to regain her humility and simply listen, recognizing that what others have to say can provide some light to help her better understand the Gospel," he states.

But continuing then to address the status of women within the church, the pontiff speaks in general terms, saying that a church that is "overly fearful and tied to its structures can be invariably critical of efforts to defend the rights of women."

"A living Church can react by being attentive to the legitimate claims of those women who seek greater justice and equality," the pope states, before continuing: "A living Church can look back on history and acknowledge a fair share of male authoritarianism, domination, various forms of enslavement, abuse and sexist violence."

"With this outlook, she can support the call to respect women’s rights, and offer convinced support for greater reciprocity between males and females, while not agreeing with everything some feminist groups propose," he continues.

The Synod's final document, which was approved by two-thirds of the some 250 bishops attending the gathering, had acknowledged that young people are asking "with great force" for a reflection "on the condition and role of women within the church."

Making the Catholic Church's first such institutional acknowledgment, it had said: "An area of particular importance is that of women's presence in ecclesial bodies at all levels, including in roles of responsibility, and of women's participation in ecclesial decision-making processes."

Asked about Francis' decision not to mention the Synod's call for women in decision-making roles during the Vatican press conference presenting the new letter, Cardinal Lorenzo Baldisseri said the pope "could not write about everything that was in the document."

"It remains in the document," said the cardinal, who heads the Vatican's synod office. "You can refer to the text of the final document."

Francis' letter addresses the continuing clergy abuse crisis in its third chapter, which is focused on some of the unique realities facing young people today.

The pope quotes at length from the Synod's final document, which, although it did not specifically name abuse survivors, thanked those who came forward "to report the evil they experienced" and said "they help the Church to acknowledge what happened and the need to respond decisively."

The pontiff then thanks God that those "who committed these horrible crimes are not the majority of priests, who carry out their ministry with fidelity and generosity."

Francis tells young people to "let themselves be inspired by this vast majority" and even asks them that if they "see a priest at risk," they "remind him of his commitment to God and his people, remind him of the Gospel and urge him to hold to his course."

"In this way, you will contribute greatly to something fundamental: preventing these atrocities from being repeated," says the pope.

Asked during the press conference about the possibility that Francis' words on abuse in the letter might give an impression that it is up to young people to stop abusive priests, Bishop Fabio Fabene said the pontiff was just emphasizing his trust in youth.

"I do not see problems in this, but an act of trust in young people from the pope," said Fabene, under-secretary of the Vatican synod office.

The youth synod was held at the Vatican from Oct. 3-28. It was the third synod called by Francis, following his 2014 and 2015 synods on family life, which resulted in the 2016 apostolic exhortation Amoris Laetitia ("The joy of love").

Francis has sought to strengthen the synod process, which was initiated by Pope Paul VI following the reforms of the 1962-65 Second Vatican Council. He has placed more emphasis on preparing for the gatherings and in encouraging the bishops attending them to speak freely than previous pontiffs.

Before the youth synod, for example, the Vatican hosted two dialogical meetings with young people in late 2017 and early 2018 in which the youth spoke plainly.

A final document from the second event even acknowledged that some in younger generations want the church to change its teachings on so-called "polemical issues" such as same-sex marriage and use of contraception. That document also highlighted the lack of women in decision-making roles in the church.

After the four-week synod meeting in October, the gathering released its own 60-page text that was the fruit of intense discussions among the participating 267 male prelates and 72 lay auditors.

During the voting process on the text Oct. 27, the prelates gave each of its paragraphs a yes or no vote. All of the 167 paragraphs of the document were adopted by the assembly with the required two-thirds: 166 members of the 249 present for the voting.

Francis spends the last third of his new exhortation offering long reflections on the shape and scope of the church's youth ministry and on advising young people on how to discern their vocation in life.

Opening his reflections on how a young person can go about identifying his or her vocation, the pontiff says that a person's calling from God is not only about the work that they will do.

"Your vocation is something more: it is a path guiding your many efforts and actions towards service to others," the pope advises. "So in discerning your vocation, it is important to determine if you see in yourself the abilities needed to perform that specific service to society."

"This gives greater value to everything you do," he says. "Your work stops being just about making money, keeping busy or pleasing others. It becomes your vocation because you are called to it; it is something more than merely a pragmatic decision."

Francis exhorts young people to make the best of their youth, and to be unafraid of taking risks or making mistakes.

"Don’t observe life from a balcony," the pope advises. "Don’t confuse happiness with an armchair, or live your life behind a screen."

"Whatever you do, do not become the sorry sight of an abandoned vehicle!" says Francis. "Don’t be parked cars, but dream freely and make good decisions."

A version of this story appeared in the April 19-May 2, 2019 print issue under the headline: Francis' youth exhortation says church must change but is not specific .