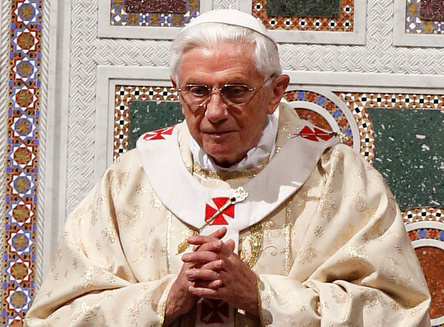 VATICAN CITY -- During a Mass in which priests renew their promises of fidelity to Christ, Pope Benedict XVI firmly criticized dissent from church teachings and disobedience of God's will as illegitimate pathways toward reform and renewal.

Surrounded by more than 1,600 priests, bishops and cardinals, the pope cautioned against calls for women's ordination, saying such campaigns seemed more "a desperate push" to fulfill one's own preferences rather than a sincere attempt to conform one's life more closely to Christ.

During the April 5 chrism Mass in St. Peter's Basilica, which focuses on Holy Thursday as the day Jesus shared his priesthood with the apostles, the pope said he wanted to use the occasion to ask all priests, including himself, to meditate upon what their consecration really means.

"Are you resolved to be more united with the Lord Jesus and more closely conformed to him," which entails a renunciation of oneself and "of the much-vaunted self-fulfillment," the pope asked.

Being Christ-like means not to be served but to serve, not taking but giving, he said.

If that is the nature of the priesthood, then what should be the response of priests when faced with "the often dramatic situation of the church today," the pope asked.

Without specifying the country, Pope Benedict said a group of priests from a European nation have issued a call for disobedience of church teaching, specifically regarding the question of women's ordination.

Last year the president of the Austrian bishops' conference, Vienna Cardinal Christoph Schonborn, condemned a "Call to Disobedience," signed by 250 of Austria's 4,200 Catholic priests. The document urged Catholics to begin a campaign in support of women priests and "priestless eucharistic liturgies," as well as for Communion to be given to non-Catholics and remarried divorcees.

Also, 311 theologians from Austria, Germany and Switzerland signed a memorandum last year demanding the ordination of women and married men, as well as an "open dialogue" on the church's "structures of power and communication."

Pope Benedict asked, "Is disobedience a path of renewal for the church?" adding that Blessed John Paul II taught "irrevocably that the church has received no authority from the Lord" to ordain women.

Pope Benedict said perhaps such campaigns are motivated by concern for the church and believe that "the slow pace of institutions has to be overcome by drastic measures, in order to open up new paths and bring the church up-to-date."

"But is disobedience really a way to do this?" the pope asked.

True renewal must be based on lives that are radically conformed to Christ and God's will, he said.

Christ did seek to correct errors in human traditions, the pope said, but only those customs that stifled God's word and will, seeking to eliminate "human caprice" so as to reveal God's authentic desire for his people.

Being humble, subservient, and obedient to God and following church teaching are not excuses "to defend inertia, the fossilization of traditions," the pope said.

The era following the Second Vatican Council showed what a process of "true renewal" looks like, and it can be seen in many of the new movements and ways of life that are "filled with the joy of faith, the radicalism of obedience, the dynamic of hope and the power of love," he said.

Presiding over the first of two Holy Thursday liturgies, Pope Benedict blessed the oils that will be used in the sacraments of baptism, confirmation, ordination and the anointing of the sick.

Deacons carried the oils in large silver urns to the main altar while catechumens, youths preparing for confirmation, the sick and deacons about to be ordained in the Diocese of Rome wheeled small tables carrying large, artistic urns, which also contained sacramental oils.

In his homily, the pope called on all priests to continue to look to Christ and the saints for guidance in how best to serve and renew the church and minister to humanity.

"God is not concerned so much with great numbers and with outward successes, but achieves his victories under the humble sign of the mustard seed," the pope said.

He urged bishops and priests to remember their role as teachers and to use the upcoming Year of Faith to combat "the growing religious illiteracy found in the midst of our sophisticated society."

"We preach not private theories and opinions, but the faith of the church," he said. Accurate, authentic guides of what the church teaches can be found not only in sacred Scripture, but also the texts of Vatican II, the Catechism of the Catholic Church and Pope John Paul II's writings, which "are still far from being explored," he said.

However, such teaching will only be credible when those preaching live lives that are visibly touched and shaped by Christ and his word, the pope said.