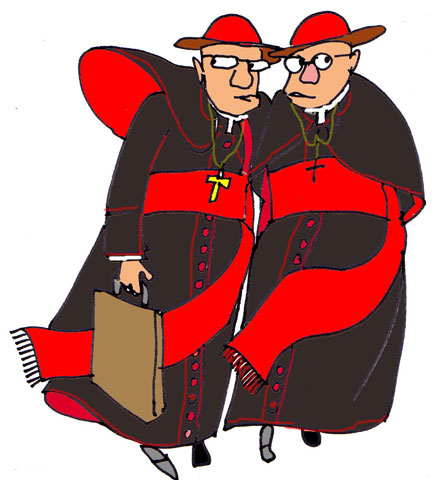 The two cardinals shuffled slowly down the long avenue outside the Catacombs of St. Sebastian. Their view of the Vatican was obscured by the rows of towering cypress trees that lined both sides of the road.

"I haven't been here in years," said Cardinal Bergano. "But we couldn't talk in my office. It's bugged by every agency in Christendom."

"Besides," said Cardinal Farelli, "we don't want to be seen together by anyone who might draw the wrong conclusions."

The men looked disconsolate despite the sunny sky and balmy winter weather. A warm wind blew their broad fascia, which fluttered beside them like scarlet kite tails.

"Yes," said Bergano, "the press is watching us closely for signs of rebellion against the Holy Father. We have to be careful."

"Bergoglio has only been in office for nine months, and he has already undone most of the good work of the last two papacies," Farelli sighed.

"He's fostering a cult of personality with his spontaneous gestures and all this claptrap about the poor. And he's far too intimate with the crowds, kissing babies and signing sweatshirts. The faithful are even discouraged from kissing his fisherman's ring," added Bergano.

"His offhand remarks to the press have been a disaster," Bergano exclaimed. "L'Osservatore Romano has to correct half of what he says before it's printed."

"His liturgical style is undignified for the supreme pontiff. He preaches without wearing his miter and waves his arms when he talks. He even distributes Communion in the hand in St. Peter's," said Farelli.

"And he's driving the Curia crazy," Farelli continued, "ordering them to hear confessions at a church near the Vatican, as though such important men had time to listen to the neurotic drivel of pious tourists."

"He's been a disaster for the fashion industry. He looks like a Presbyterian chorister in plain white robes, stomping around in those worn black wingtips. Gammarelli's has barely turned a profit since his election, and ermine farms are closing all over Scandinavia."

"And he's ruined the Vatican bank. Why, Sicilian families have to send their money all the way to America to be laundered through a store called Target."

"But what can we do?" Farelli asked. "They burned the ballots after his election, so we can't claim the vote count was a clerical error."

"We can't poison him with impunity," added Bergano. "Too many others eat with him in that cafeteria line at the Casa Santa Marta."

"We could grease the brakes on his Ford Focus, but he stops so often to greet the crowds that he never gets up enough speed to hurt himself."

"We could plant 'evidence' that he was ringleader of a heterosexual lobby among the Jesuits," ventured Farelli.

"No," Bergano countered. "We don't want to discredit a whole religious order."

The cardinals' voices were scratchy but unmistakable as translators picked them up on their headphones at a branch office of the National Security Agency in Washington, D.C. "Where are the microphones?" asked Agent Bronson, the younger of the two translators.

"They're hanging around the cardinals' necks," explained Agent Wilson, who had spent his career with the NSA and was two years away from retirement. "The mikes were hand-sewn into leather scapulars by a woman who works in the Vatican gift shop."

"This news is dynamite," said agent Bronson, who wasn't religious but liked what he had seen of Pope Francis. "Should we pass it on to the White House or the Vatican?"

"No," said Agent Wilson, a lifelong Catholic who had spent two years in a seminary before settling on a career in intelligence. "Obama's a wimp, and Pope Francis is way too forgiving. This seditious talk is too dangerous to play around with. We need to report it to somebody who knows how to take names and kick ass. We'll send it to Sr. Joan Chittister."

[Isaac McDaniel is a Catholic priest who teaches at Bellarmine University and Spalding University in Louisville, Ky.]

A version of this story appeared in the Feb 14-27, 2014 print issue under the headline: How do you solve a problem like Pope Francis?.