Hundreds gather for talk on 'Francis Factor' at Georgetown 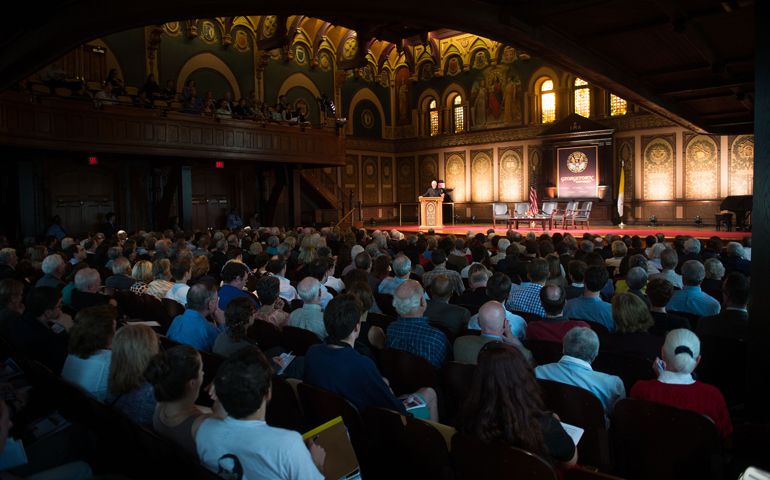 Hundreds gathered in Gaston Hall for a discussion on "The Francis Factor" on Tuesday at Georgetown University in Washington, D.C.

Washington — It was a daunting challenge for a startup think tank: how to make a good first impression in a town where think tanks are as common as Starbucks.

The new pope proved up to the task, drawing lots of attention to the Initiative on Catholic Social Thought and Public Life at Georgetown University. Its inaugural event Tuesday evening, a discussion of "The Francis Factor: Implications of Pope Francis and Catholic Social Thought for American Public Life," had to be moved from an original venue that accommodated a few hundred people to the celebrated Gaston Hall, a place long associated with dignitaries and power brokers, which holds more than 700. It was packed to capacity, and the crowd included a significant representation of younger people and students.

While the evening was light on specifics about how this 6-month-old papacy might affect public life in a nation newly stalemated over the budget and a health care law, there was no shortage of Francis factors keeping the conversation lively among the panel of punsters and Catholic insiders.

John Carr, director of the initiative and moderator for the evening, opened by wondering what a publisher, pre-Francis, would say to the outline of a book that began with the first resignation by a pope in 600 years and was followed by the election of an old Jesuit who rode the bus to work as the archbishop of Buenos Aires, Argentina; who announces a church for and of the poor; lives in a guest house instead of the papal palace; and spends Holy Thursday washing the feet of young people in prison.

"He'd say don't waste your time or mine," Carr said. "Well, I can't wait for the next chapter."

Francis also appeared to aid the initiative's ambition of "promoting civil dialogue and collaboration for the common good." Kim Daniels, a founder of Catholic Voices USA, a conservative advocacy group, and spokesperson for the president of the United States Conference of Catholic Bishops, said Francis is calling church members "to get beyond the tired liberal-conservative divide that too often has pitted us against each other" and "stopped us from working together for the common good."

While much of the discussion was about the differences and correctives Francis has wrought in the papacy and Vatican culture in the past six months, Daniels described a seamless continuum from "the heroic papacy of John Paul II" to the "teaching pontificate of Benedict XVI" to the "pastoral pontificate of Francis."

New York Times columnist and public television political analyst David Brooks, introduced as the non-Catholic bringing the "outsider" view to the proceedings, voiced some of the most erudite insider insights and raised the lone suggestion of a Francis negative. From the outside, Brooks said, "it looks like less about abortion, less about gay marriage, more about a counterculture, a comprehensive counterculture."

He considered Francis' admission of "I am a sinner" the most important line of his recent interview with Jesuit publications. "That's what Christianity represents."

Brooks said in recent years, the church "has adopted some of the munitions of the world" to fight back against the forces of the world. In engaging the same forces, Francis "has adopted the powers of Christ. And that's a series of inverse and ironic and paradoxical powers. You confront pride with humility; you confront aggression with renunciation; you confront someone who's materialistic with grace. There's an ironic power in all these forces. So to me, his presence is really introducing a spiritual counterculture that transcends the Catholic church and transcends Christianity."

Brooks predicted Francis will be a "charismatic figure" on the level of John Paul II. But he also posed the possibility that the pope's "epistemological modesty," his willingness to admit what he doesn't know, and the fact that "the core message of Francis is the person of Francis" might slide into "mushiness."

The church is more than "a feel good institution," Brooks said. "It is a doctrine and a creed." If the church should lose contact with the doctrine that "sometimes makes people outside this room uncomfortable" and focuses instead on "a charming guy who washes people's feet, then you're losing something elemental to the church."

Carr responded that "the most important word in Catholic life is 'and,' in this instance combining that personalism that washes feet and meets the migrant with a set of ideas." Francis, he said, is "challenging the church to both understand the actions and the words."

Alexia Kelley, president and CEO of FADICA, a network of Catholic foundations and philanthropists, said that Francis “speaks from the heart to our hearts” and provides an alternative to the crisis in leadership evident in today’s political culture. Kelley, who was founding director of the liberal Catholics in Alliance for the Common Good and co-editor of Living the Catholic Social Tradition, said the crisis is about the very meaning of leadership and whether it is for service or about power. “I think Pope Francis is really illuminating what servant leadership is all about.”

Mark Shields, longtime analyst with Brooks on "PBS NewsHour," said he couldn't think of another public figure who has elevated the level of civil discourse so quickly.

"It is remarkable," he said, especially for someone who doesn't like doing interviews.

He said he finds that friends who are "voluntarily retired" Catholics are "more cheered by this pope, I think, than any other single development in recent history."

Shields said he is impressed by Francis' humility and the pope's ability to make him smile.

"I haven't experienced that since John XXIII," who was elected in 1958 and convened the Second Vatican Council (1962-65).

"Most of all," Shields said, "he asks the questions we all have to answer. Not, 'Are you better off?' but 'Are we better off? Are the strong among us more just? Are they more humane? Are they more engaged? Are the weak among us more secure, more comforted and more valued?' To me that is a value we need desperately in this country and in this world."

As director of the department of Justice, Peace and Human Development for the U.S. bishops for more than 20 years, Carr was often the face of Catholic social teaching in the public square. He was introduced by Washington Cardinal Donald Wuerl, who delivered a strong endorsement of the initiative.

Carr said the new project will seek to cross political, denominational and faith boundaries in relating Catholic social teaching to the issues of the day. He said the institute "could make clear connections: defending human life and dignity, promoting human rights and responsibilities, practicing solidarity and subsidiarity, protecting the unborn and the poor."

A particular interest, he said, is encouraging the next generation of Catholic leaders to see faith "as a gift, not a burden; a way of life, not just a set of rules; and a call for participation in public life, not an excuse for cynicism."

[Tom Roberts is NCR editor at large. His email address is troberts@ncronline.org. Follow him on Twitter: @NCRTRob]

Vatican | Hundreds gather for talk on 'Francis Factor' at Georgetown

Cardinal to leave Scotland for period of prayer, penance