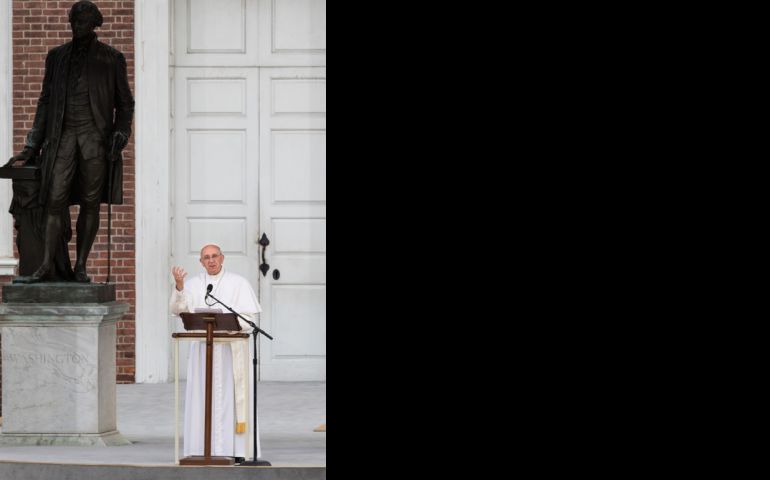 Pope Francis delivers an address at Independence Mall in Philadelphia Sept. 26. He spoke near a statue of George Washington to an estimated crowd of 50,000 people. (CNS photo/Lisa Johnston, St. Louis Review)
This article appears in the Francis in the United States feature series. View the full series.

Philadelphia — With America’s hallowed hall of freedom as a backdrop, Pope Francis offered an at-times passionate reflection upon two ideas principal to the nation’s founding: religious liberty in a pluralistic society that upholds the dignity of all, and the cultural contribution of immigrants that “enrich the life of this American land.”

Among an estimated crowd of 50,000 people gathered along Independence Mall — whose grounds house the Liberty Bell and Independence Hall, site of the signing of the Declaration of Independence and adoption of the U.S. Constitution — Francis said his being there was “one of the highlights of my visit.”

“It was here that the freedoms which define this country were first proclaimed,” he said, referencing the signing of the Declaration, which upheld that all men [and women] are created equal, having inalienable rights that governments exist to protect.

Speaking in Spanish from the lectern used by Abraham Lincoln in 1863 to deliver the Gettysburg Address, Francis said, “Those ringing words continue to inspire us today, even as they have inspired peoples throughout the world to fight for the freedom to live in accordance with their dignity.”

A series of speeches, including from Philadelphia Mayor Michael Nutter and Pennsylvania Gov. Tom Wolf, and multicultural performances from Tibet preceded Francis’ arrival at Independence Hall.

Upon his popemobile arriving at the mall, a group of Hispanic bishops, among them Los Angeles Archbishop Jose Gomez, on behalf of the Hispanic community, presented the pontiff with a five-foot cross, called the “cruz de los encuentros”  a symbol of the community’s past, present and future.

Turning near the end of his address to representatives in the crowd “of America’s large Hispanic population” and recent immigrants, the pope said that many came to the U.S. “at great personal cost, but in the hope of building a new life.”

“Do not be discouraged by whatever challenges and hardships you face. I ask you not to forget that, like those who came here before you, you bring many gifts to your new nation. You should never be ashamed of your traditions,” Francis said.

In particular, he implored them not to allow that pursuit and entrance into a new land to lead them to abandon the integral pieces of their past.

“I repeat, do not be ashamed of what is part of you, your life blood,” he said.

It was one of America’s earliest immigrant communities — the Quakers, led by William Penn, who founded Philadelphia in 1682 as part of his “holy experiment” as a colony based on religious tolerance — that the pope said enriched this land through their “profound evangelical sense of the dignity of each individual and the ideal of that and the ideal of a community united by brotherly love.”

“That sense of fraternal concern for the dignity of all, especially the weak and the vulnerable, became an essential part of the American spirit,” he said.

Francis called religious freedom “a fundamental right” that that shapes interactions with others with different religious views and that “transcends places of worship and the private sphere of individuals and families.”

Citing his apostolic exhortation Evangelii Gaudium, the pope said that religions “have the right and the duty” to show it is possible to build a society that demonstrates “a healthy pluralism” that values differences is a “precious ally in the commitment to defending human dignity … and a path to peace in our troubled world.”

“In a world where various forms of modern tyranny seek to suppress religious freedom, or try to reduce it to a subculture without right to a voice in the public square, or to use religion as a pretext for hatred and brutality, it is imperative that the followers of the various religions join their voices in calling for peace, tolerance and respect for the dignity and rights of others,” he said.

The recent political climate in the United States has wrestled with the proper interpretation of religious freedom, whether in the context of contraceptive coverage in healthcare plans under rules of the Affordable Care Act or in light of the U.S. Supreme Court’s ruling legalizing same-sex marriage. Often, the U.S. Catholic church has positioned itself front and center in the debate, filing lawsuits against the contraception mandate and strongly voicing a view of marriage as being only between one man and one woman.

History, Francis said, has shown the constant need to reaffirm, re-appropriate and defend essential truths. Speaking to U.S. history in particular, he described it as “a tale of constant effort, lasting to our own day, to embody” the principles of the Declaration of Independence in daily life.

Saying it’s important to recall the past, Francis offered chapters of great struggles — ending slavery, extending voting rights, advancing the labor movement, and addressing racism and prejudices toward immigrants — that “shows that, when a country is determined to remain true to its founding principles, based on respect for human dignity, it is strengthened and renewed.”

“When individuals and communities are guaranteed the effective exercise of their rights, they are not only free to realize their potential, they also contribute to the welfare and enrichment of society,” he said.

Francis thanked all people, “of whatever religion,” who have served God “by building cities of brotherly love” through work to defend life at all stages, care for neighbors, and to take up the causes of the poor and the immigrant.

“In this witness, which frequently encounters powerful resistance, you remind American democracy of the ideals for which it was founded, and that society is weakened whenever and wherever injustice prevails,” Francis said.

Francis, then in brief, off-script comments, repeated a theme he has used many times before on globalization. He said that the push for globalization is good but that is must be a process that respects the individual identities of different peoples.

He compared the images of a sphere and a polyhedron, saying that a sphere makes every point from the center equal but that a polyhedron is an example of "respecting each persons, their richness, their particularity."

He closed by asking that the United States and each of its citizens to renew their gratitude for their blessings and freedoms. “And may you defend these rights, especially your religious freedom, for it has been given to you by God himself,” he concluded, the bell atop Independence Hall clanging a persistent chorus.

'We want the truth': Catholics hope for honesty in McCarrick report