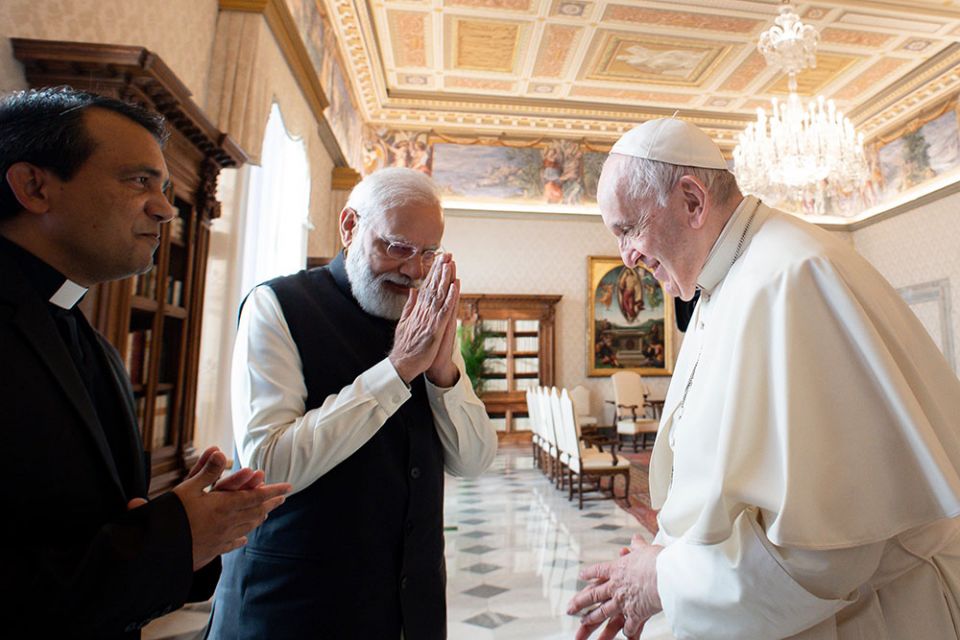 Pope Francis is pictured with Indian Prime Minister Narendra Modi during a meeting at the Vatican Oct. 30. (CNS/Vatican Media)

ROME — Following a 55-minute meeting with Pope Francis at the Vatican on Oct. 30, Indian Prime Minister Narendra Modi took to social media to announce he had invited the pontiff to visit India.

"Had a very warm meeting with Pope Francis," Modi wrote on Twitter. "I had the opportunity to discuss a wide range of issues with him and also invited him to visit India."

The Vatican communique released after the meeting did not mention the invitation and only noted that the two discussed the cordial relations between the Holy See and India.

Francis, the leader of 1.3 billion Catholics worldwide, has long sought to visit India, a nation of 1.3 billion people, with a minority Catholic population of only 20 million. Modi, who has served as prime minister since 2014, has long been associated with Hindu nationalist groups that have cracked down on the country's religious minorities.

Cardinal Oswald Gracias of Mumbai, who serves on Francis' Council of Cardinals Advisers, has worked for years to arrange for such a visit. In 2017, he told NCR that coordinating the visit with the government was proving to be "a little bit of a difficult situation."

Francis had previously intended to visit India in 2016 — a visit that was later delayed until 2017 and eventually tabled indefinitely as the country's Catholic bishops waited for Modi to offer an official invitation.

Modi is in Rome for the G20 meeting of government leaders, taking place Oct. 30-31. He will next travel to Glasgow, Scotland, to participate in the United Nations climate summit, known as COP26. India is the world's top polluter and has previously rejected pressure by other governments to commit to net zero carbon emissions ahead of the high-stakes environmental meeting.

Pope Paul VI was the first Roman pontiff to visit the Indian subcontinent in 1964. Pope John Paul II twice visited the country, most recently in 1999.