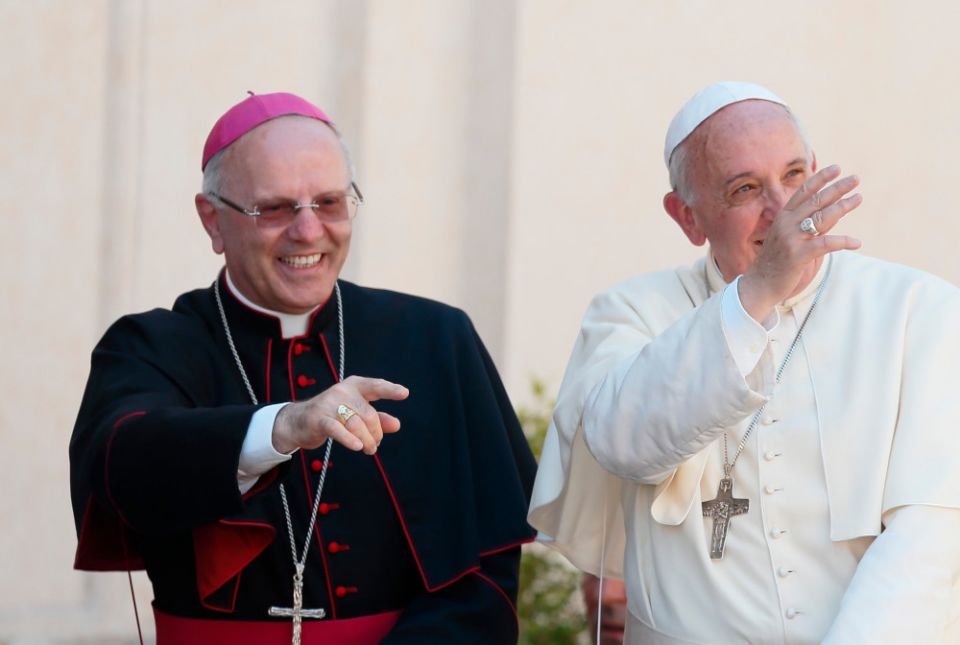 Bishop Nunzio Galantino, now president of the Administration of the Patrimony of the Holy See, is pictured with Pope Francis during the pope's visit to Cassano allo Ionio, Italy, in this June 21, 2014, file photo. In an Oct. 31 interview with the newspaper Avvenire, Galantino said investments by the Vatican's Secretariat of State are now under tighter control. (CNS/Paul Haring)

Vatican City — A lack of oversight and control over the Vatican Secretariat of State's investment activities may have facilitated some bad property deals, said Bishop Nunzio Galantino, president of the Administration of the Patrimony of the Holy See.

"Taking advantage of past experience and the mistakes made, we are working to get more prudent, transparent and professional management" of assets and ensure they are subjected to "adequate controls" so investments will be both ethical and profitable, he said in an interview Oct. 31 with Avvenire, the daily newspaper of the Italian bishops' conference.

Since June 2018, Galantino has headed APSA, the office in charge of administering properties owned by the Vatican in order to provide funds for the work of the Roman Curia.

The Secretariat of State, he explained, has its own funds, which it has used for various investments — most notably, a property in London's Chelsea district, which incurred major debts.

APSA was not involved in that deal, which led to losses estimated at between $85 million and $194 million, he said. However, he added, real estate properties typically increase in value over time and with improved economic conditions.

The Secretariat of State, he said, has its own "basket" or pool of funds, which include the Peter's Pence collection from donations by the faithful.

So while the initial purchase of the property would have come from this common fund, he said, the debts incurred in taking control of the majority share of the property were covered by the secretariat's own reserves, not Peter's Pence or the pope's other discretionary charitable fund, which has been under "separate prudent management" within the secretariat.

While all these charitable funds are earmarked for supporting the pope's mission, the Secretariat of State outsourced managing the investment of this capital to outside managers, the bishop said.

When asked if there was any kind of oversight of the secretariat's investment balance sheet and if so, who provided it, Galantino said the question, in fact, revealed two mistakes that had been made in oversight.

"The first is to trust, with complete confidence, managers" to handle such investments "without any control by the Secretariat of State. The end results of this way of doing things clearly constitute a mistake," costing the Vatican not just financial loss, but also a hit to its reputation. 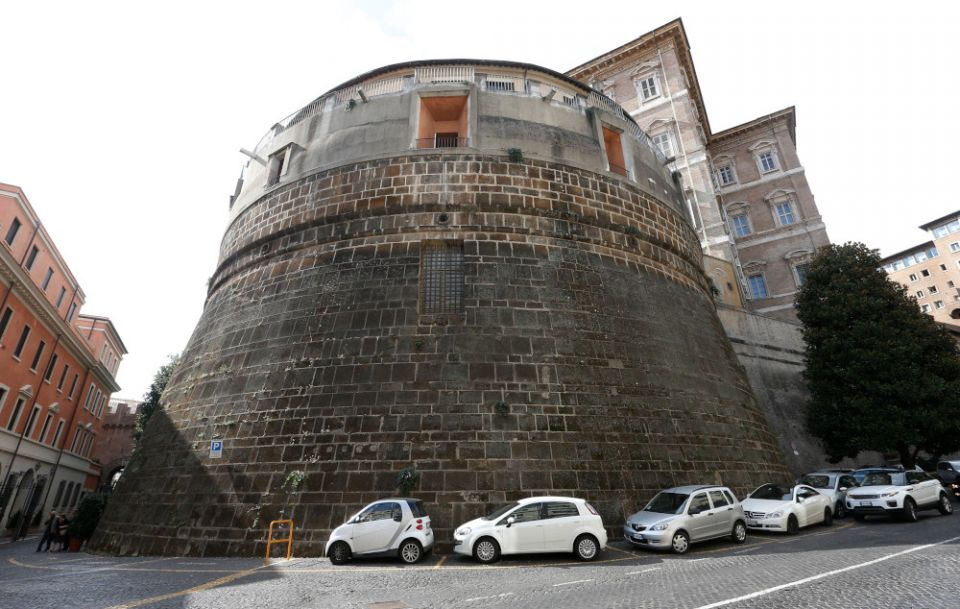 The tower of the Institute for the Works of Religion, often referred to as the Vatican bank, is pictured in this 2019 photo file photo. (CNS/Paul Haring)

"The second mistake is that up to now, the Secretariat of State was subject to little obligation in reporting nor was it made to ask for any authorization for acts of extraordinary administration as other dicasteries are required to do" from the Secretariat for the Economy, he said.

"This process avoids making past mistakes," Galantino said. "Now more eyeballs are looking at operations and verifying procedures. Important teamwork has begun aimed at efficiency and transparency in management."

With a Vatican investigation underway, it will be up to the Vatican court to determine whether the mismanagement was caused by "mistakes, imprudence, fraudulent activity or something else," he said. "And it will be the tribunal that will tell us if and how much can be recovered."

"Up to now, the Secretariat of State did not have a higher inspection body" for identifying and vetting outside consultants on investment opportunities, he said. "This clearly exposed [the Vatican] to mistakes in evaluating people," who then led the Vatican into making the investment now under investigation.

The bishop was asked to expand on what Jesuit Fr. Juan Antonio Guerrero Alves, prefect of the Secretariat for the Economy, said in a recent interview about how all funds soon would be centralized under APSA's oversight.

He said only that, learning from past experience and mistakes, "we are working to get more prudent, transparent and professional management" of assets.

It comes down to "a change in mentality, always difficult to bring about with ease and promptly," he said.