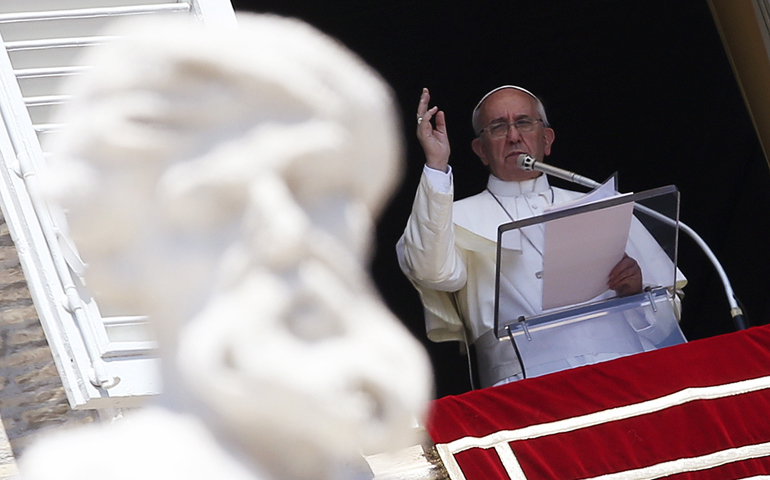 Pope Francis gives a blessing as he leads the Angelus Aug. 18 from a window in the Apostolic Palace at the Vatican. (CNS/Reuters/Alessandro Bianchi)

This is the second of a series of articles examining Pope Francis' recent interviews. A new article will be published each day this week on NCRonline.org.

"The top person can never be wrong."

I remember being totally shocked, insulted and in full disagreement when I first heard this statement from an organizational consultant years ago. Only in asking him to explain was I finally forced to concede and reluctantly agree.

By this statement, governance experts mean that when the CEO, founder or president of any group offers any public statement or action, it must be dealt with as such. It stands, and the burden of disproof is elsewhere. It is now a datum that must be responded to, refined, changed or proven wrong. It can never just be dismissed as if it did not happen. If you try, you are being very naive, even if it makes you feel strong and even if you are finally right. Even your shout "S/he is wrong!" must be backed up by superior arguments and actions from your side. In that valid sense, the top person is never "wrong." They still determine the agenda, even by forcing us to fight against it.

In my secret world, I have always been convinced this is the only helpful meaning to papal infallibility. In this sense, the First Vatican Council was totally right, and in this sense, Pope Francis is surely infallible.

I begin with this perhaps controversial ideal because I think the world recently received from Francis some infallible statements. He has forever changed the Catholic conversation. We can never go completely backward. No one can ever say a validly elected pope, with all that implies in anyone's mind, did not say the things Francis said in the interview published Thursday. They will be quoted for a long time to come. It is now a part of the authoritative data, like the Gospels themselves, and must be reckoned with.

He did this not so much in terms of doctrinal or moral assertions, but simply in terms of a radical change of style, persona and emphasis, which ironically has huge substance. For once, we have a pope talking personally, honestly, pastorally, without crossing every t and dotting every i. A pope being vulnerable! Has this ever been heard of before? Did history even allow it up to now? By historical record, maybe only when Pope Peter said, "Leave me, Lord, I am a sinful man" (Luke 5:8).

When have we heard such heartfelt talk from a vicar of Peter -- which seems to be how Francis wants to be known, and should be known. How can you speak in an I-thou and humble manner when you are told you are the very "vicar of Christ"? This is a burden only the full body of Christ can carry and somehow every Christian must also carry. Even Jesus himself is only considered the "head" of the body (Ephesians 5:23) and not the whole body, but the pope surpassed Christ himself in having to be the full vicar of Christ. This is an arrogance no individual can live up to, yet they had to pretend and try. Don't hate them for it; they were merely following the impossible script we gave them.

Francis' very manner of talking is unpapal and scary for any who feel a pope owes them absolute answers and perfect certitude about everything -- and they have an absolute right to these absolute answers. We now have a pope who knows his role: to be a pastor, a friend, a companion on the journey, and a surgeon in the "field hospital after a battle."

Francis even goes so far as to say, "If one has the answers to all the questions -- that is the proof that God is not with him. It means that he is a false prophet using religion for himself." Brothers and sisters of the church, we must know in this kind of teaching Francis is returning us, after centuries of "decadent Thomism" and post-Enlightenment rationalism, to the biblical genius that we call faith, which is still our great gift to the world. Mature faith will forever be a balancing of knowing with not knowing, saying with an inability to say at all, deep certitude combined with an equally deep humility, tolerance and patience.

Yet Francis goes further: "The risk in seeking and finding God in all things, then, is the willingness to explain too much, to say with human certainty and arrogance: 'God is here.' We will then find only a god that fits our measure. The correct attitude is that of St. Augustine: Seek God to find him, and find God to keep searching for God forever."

Francis is indeed a true traditionalist in teaching us not new doctrines or moralities, but a new way of knowing that is deeply formed by the Gospel. Up to now, Catholicism has largely emphasized metaphysics ("what we think we know") and has severely neglected epistemology ("Exactly how do we know what we think we know?"). Francis is not so much telling us what to see (which our dualistic minds will merely fight and resist) nearly as much as teaching us how to see and what to pay attention to. Somehow he is telling us that true seeing is first seeing through the eyes of love and mercy. And this is Christianity itself.

Francis has become a living and happy invitation to all of humanity, even beyond the too-tight boundaries of Christianity, instead of an exclusionary bouncer standing at the always open gates of heaven. In that alone, he has changed the papacy -- perhaps forever. It will be very hard to go completely backward again.

Yes, it is true, the top person can never be wrong. The pope is still and somehow infallible.

[Franciscan Fr. Richard Rohr, a noted author and speaker, is founder of the Center for Action and Contemplation in Albuquerque, N.M.]

A version of this story appeared in the Oct 11-24, 2013 print issue under the headline: 'The top person can never be wrong'.