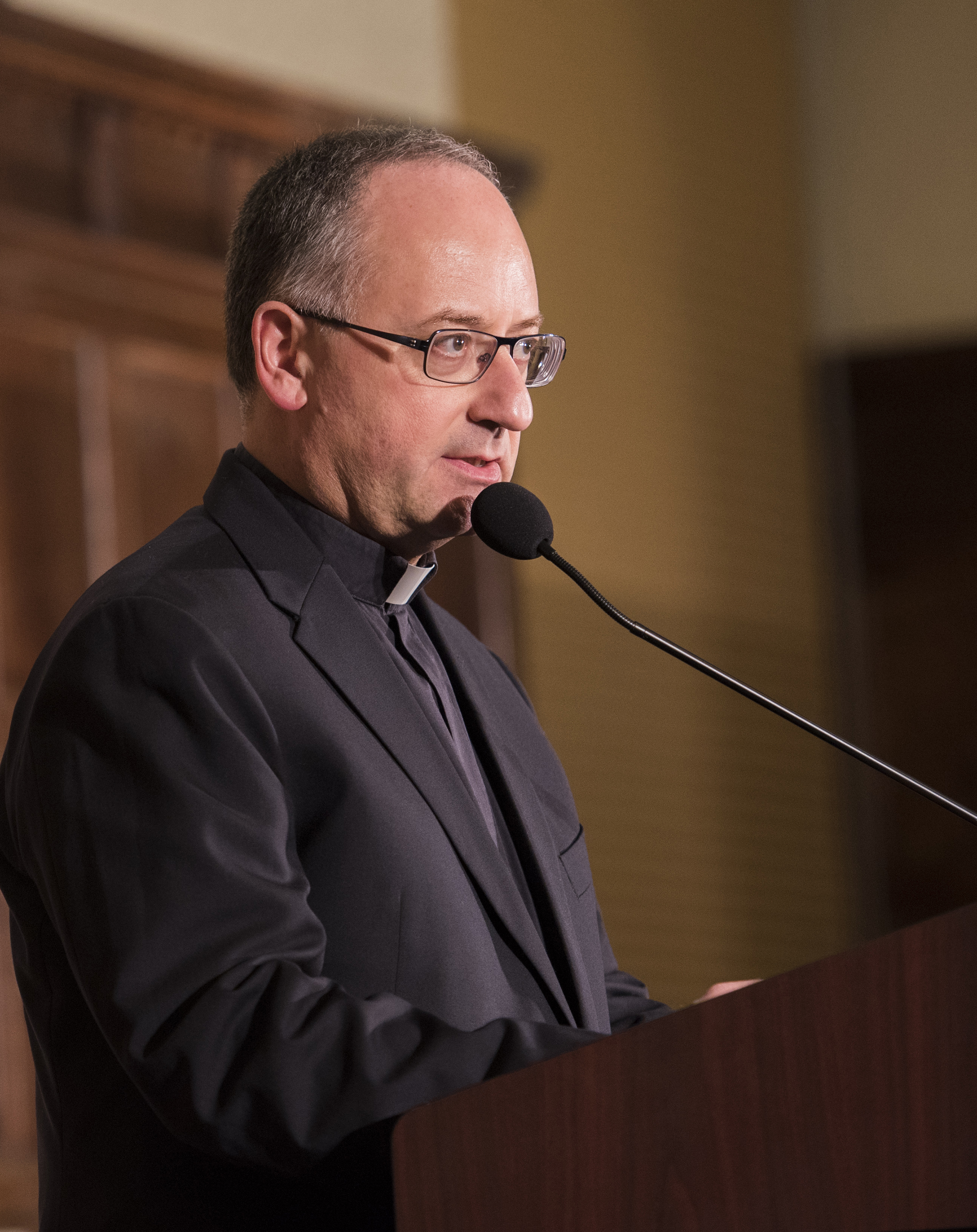 Jesuit Father Antonio Spadaro, editor of the influential Rome-based magazine La Civilta Cattolica and a close associate of Pope Francis, speaks during a Feb. 13 talk at Georgetown University in Washington. Spadaro outlined the pope's "diplomacy of mercy" that he has used with both political leaders and their citizens throughout his papacy. (CNS/courtesy Georgetown University)

Jesuit Father Antonio Spadaro, editor of the influential Rome-based magazine La Civilta Cattolica and a close associate of Pope Francis, outlined the pope's "diplomacy of mercy" that he has used with both political leaders and their citizens throughout his papacy during a Feb. 13 talk at Georgetown University.

Francis, according to Spadaro , spoke of his diplomatic aims during his 2016 World Communications Day message: "Our political and diplomatic language would do well to be inspired by mercy, which never loses hope."

"This is precisely the meaning of 'mercy' in politics: Do not consider anyone or anything as definitively lost in relations between nations, peoples and states," the priest said in his talk, "The Francis Factor at Five Years: Pope Francis' Global Vision and His Work for a More Just and Peaceful World." It was sponsored by Georgetown's Initiative on Catholic Social Thought and Public Life.

Spadaro  outlined five aspects of Francis' diplomatic ministry, and dwelt at length on the ongoing talks between the Vatican and the Chinese government over the appointment and recognition of bishops there.

It was under the "incomplete and open" diplomacy aspect that Spadaro  addressed China.

"Francis is walking the same path of John Paul II and Benedict XVI, trying to find a way to dialogue effectively with the Chinese authorities," he said.

"For decades, bishops were elected locally throughout the country in open churches operating with government approval. In countless instances, these were not episcopal candidates approved by Rome. As bishops appointed irregularly and often ordained by other bishops who were similarly appointed without Vatican approval they were -- formally speaking -- automatically excommunicated," the priest continued. "But later, and across the country and across the decades, agreements between these bishops and Rome were reached. But no great issue was made of this, and these bishops and the Vatican reached solutions to realize appointments and just get on with redeveloping dioceses and the church's life."

Spadaro  put the number of bishops appointed by the Chinese government and later "legitimated" by either St. John Paul or Pope Benedict at 45, with 70 bishops now considered legitimate by the church and "official" by the state. "Maybe the time has come to move forward," he said.

"Some are asking if it is acceptable to give the authority to ordain bishops to (the) China government," which Spadaro  said was a "completely wrong ... mischaracterization."

"The church doesn't want to give away the authority to ordain bishops. The history of the church is the history of finding agreements with the political authorities about the appointments of bishops," he added, noting there are about a dozen countries where civil authorities have consultation or "presentation" rights on bishops, and when a Vatican-Vietnam accord was reached on episcopal appointments, it "raised no noise."

While "it is certain that there will still be misunderstandings, fatigue and suffering to be faced," Spadaro  said, the desired outcome is "realistic pastoral solutions that allow Catholics to live their faith and to continue the work of evangelization in the specific Chinese context."

The pope "never gives in to the temptation to identify religion with fundamentalism," Spadaro  said. "The pope is light years away from the theorists of a 'clash of civilizations.' Francis seeks to dissolve this double narrative of a toxic final clash of religions that nourishes the fear of chaos."

Francis "strongly resists also" the notion of the church as a "pillar against the decline seen in the crisis of global leadership in the Western world" by dismissing "liberal democracy in favor of a post-modern Middle Ages in which the church would still guard the legitimacy of politics," he added.

The pope's style of "field-hospital diplomacy" allows him, according to Spadaro , to "touch open wounds with his own hands, carrying out a therapeutic gesture. In fact, Francis touches barriers as if they were the head of a sick person."

"He wants to touch the injured lands one by one," the priest said, citing, among others, Bethlehem, Cairo, Sarajevo, Albania, Sri Lanka, the islands of Lampedusa and Lesbos, and Bangui, Central African Republic.

Francis' diplomacy of solidarity "means acting on the most delicate areas of international politics in the name of the outcast and the weak," Spadaro  said.

Peace initiatives "must always be connected to the two great social themes that concern the pope: social peace and social inclusion of the poor," he added. "Francis does not want to propose a 'peace' understood as 'tranquility' at the cost of ignoring the injustices and defense of the poor."